This time at the pool we headed to the far end which Liz hasn’t fished since rejoining the club … but has been one of my favourite pegs albeit we’ve fished other pegs previously this year.

The pegs chosen face a small island about 4-5 rod lengths away from the main bank. Liz was given my usual swim at the near end of the island to fish and it also has a lily patch off to the left and with the overhanging vegetation it gives two nice areas to swap fishing between if required. I set myself up at the adjoining peg, facing the far end of the island with its bushes. It was a peg I’ve been meaning to fish for ages having only ever once fished it before albeit I did well there then if I recall.

We both float fished – lift method, 4AAA wind/driftbeater floats, 6lb line – Liz used a size 16 hook, myself a 12 with maggots as bait. We both tried alternative baits – myself, corn and bread – but it seemed that the fish only wanted maggots on the day.

However, it was Liz who was in action first … and on her first cast too … landing a nice 3lb 11oz tench…

But I quickly took second blood with a small 6oz barbel…. 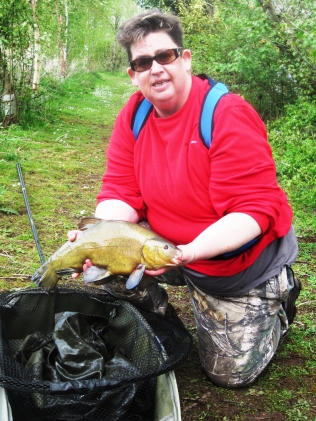 We fished on until 1545 when another sharp shower started … but in the what seemed not too far distance, there were virtually continuous mega claps of thunder to be heard – the sort of thing you’d expect to hear from something like a 32 storey block of corrugated tin constructed flats collapsing a hundred yards away! Strange thing was that it wasn’t really dark, no flashes of lightning seen or sensed, and actually still very blue skies were evident outside the grey area. But, being cautious and having intended to pack up at 1600 anyway, we decided to call it a day and pack down ‘just in case’ … and, as usual, by the time we’d half cleared our kit, the thunder had become a memory and it was sun and blue skies all around… but the pub was open anyway… LOL

So, to sum up the day and the total tally… 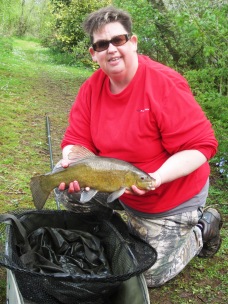 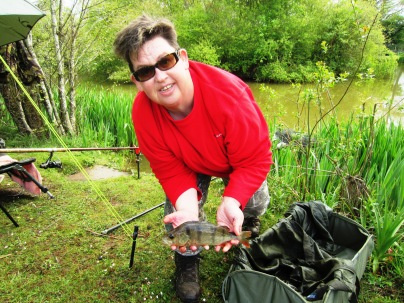