0630 on Monday 8th August 2022 saw Liz and myself on the road to the club’s tench and bream pool (AA-B) again, arriving at around 0700 … to find ourselves the first there, an unusual incidence in the recent past but perhaps the pool’s recent fortunes were playing a part in that. Recently, the usually good catches have been at a premium with few good sized being taken … and a match there on Sunday 7th was won with just 14lb with second and third places being taken with just over 3lb and 2lb respectably (although the 3rd placer did lose 2 carp)… 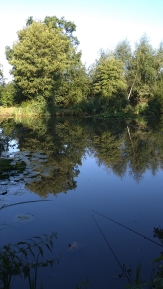 As I say, we were first there and thus had our choice of swim and I elected to fish in the same swim as my last visit (peg 23), whilst Liz’s usual swim was now completely covered by lily pads and so she elected to fish the swim to my left (peg 24) … my swim had clear water in front and a small patch of lilies to my right whilst Liz was on the opposite of the lily patch which were thus to her left.

I pre-fed my swims (straight out in front 3-4 rod lengths and just off edge of lilies on the right) with four golf ball sized groundbait/particle balls and catapulted dead maggots in each plus during the day an extra groundbait ball was added along with small pouches of dead maggots.

My initial cast into the open water brought no action at all and at 0845 I cast to the edge of the right hand lily patch and a few seconds later the float lifted and started travelling … the strike met with resistance and the fish immediately moved into the lilies where it was solid and couldn’t be moved an inch … so I opened the bale arm of the reel to give loose line an put the rod back down in the rests and watched for line movement … and about 30 seconds later line started to slowly peel off the reel’s spool … the rod was lifted and pressure applied and the fish could be felt pulling back and after another minute or so it was clear of the pads and ready for Liz to net for me… a 2lb15oz tench … not huge but definitely satisfying! :)

[AN ASIDE…. this photo was taken on my mobile camera (Sony Xperia 10ii) and I notice it is a far better/ clearer one than any I’ve taken on my Canon digital cameras! The advantage of my cameras are that they allow ‘custom’ self timer settings and I usd ‘first shot after 20 seconds, then 5 more shots at 2 second intervals’ which allowed plenty of time to operate the shutter release button, return to the fish mat, take hold of fish comfortably and pose and I got 6 photos, one of which at least is a good one.

However the phone’s self timer only allows one shot to be taken at either 2 seconds after shutter activation (no good at all!) or, like many cameras after 10 seconds- not impossible to manage if everything goes well but that down to pot luck and a perfect return, grab and pose but usually there’s a fumble or the fish flaps, etc and so the whole procedure needs re-doing… however, I’ve relocated my smart phone’s bluetooth remote activator (£2-£3 from eBay) so that I can activate its camera shutter remotely whilst holding the fish … and by holding the button down the phone captures  images in burst  mode ie takes photo after photo until the button is released … so it seems now that future pics will be done via the phone whenever possible]

After that I just had small nudges/waggles on the float despite bait changes to bread and jelly bread until 1330 when, having gone back to maggot, I landed a 1oz-2oz sized bream… and Liz had nothing at all, despite trying sweetcorn for a while, until 1530 when we were packing up and she found a small (ozs) perch on the hook.

So another slow day at the office…

BLAMING THE BAIT … well, I’d bought two pints of mixed reds and white maggots from the local Angling Direct on Saturday in readiness for the session and I thought they didn’t look the best when I got them home … looked small to me but thought it was just me … but on arrival at the water and giving Liz her share she commented on how small they were … and closer inspection showed a lack of food sac ie old maggots.  And by small I mean a size 16 hook held 5 maggots and there was still 50% of its metal showing! I’ve seen bigger squats and pinkies!

So, that’s it for me, AD have lost a customer now – but I have a few places in mind to replace them. One an angling store that I used to get my maggots from back during the 2021 lockdown and had to queue outside the backdoor for and which were good quality then but its a bit of a bus journey to get to as Liz has the car for work on the days I have available for procurement. The shop does offer our club a discount though on production of the membership card for tackle at least, unsure about bait. I did notice they did packs of pike deadbaits for a good price too so possibly get my pike baits from them as and when needed this year … usually buy mail order but £9 delivery makes the prices a bit heavy unless buying a load but then you have the onus to store them taking space up in the freezer.

There is another proper angling shop a hour away via two bus rides but with frequent  services and two hardware/tackle/bait type shops, one about 20 mins away on one bus and the other local but two bus rides away with one ride on an infrequent service.

I used to have two excellent maggot suppliers locally – one was a large warehouse, sold everything from garden supplies, food, furniture, mugs, toothpaste, mirrors, etc, etc but also had a really good separate fishing area – proper angling area, not re-packaged stuff – good branded rods, reels, line, bags, etc and maggots like caterpillars … and the cheapest maggots in the area at that. Was called Hooties, and was owned by the chap who actually founded Poundland … but unfortunately he sold up the business and its now part of  ‘The Range’ chain of businesses … awful place!!! The other was the ‘Bilston Angling Centre’ …. which closed during the 2021 lockdown and never re-opened and now the shop is a Caribbean type greengrocer … very decent maggots they did too… so a sad loss.

Thursday, 11th August, a session at the club’s carp/bream pool (AA-GH) is on the cards.