As suggested in my last post I did indeed set off for a BAA stretch on the Warks Avon at Pensham near Pershore at 0600 on Tuesday 17th August.

The trip, largely on the M5 (J2-J7), was not bad … a large number of trucks and lorries on the motorway but traffic was flowing freely past … and I did fine until the last half a mile or so when the SatNav did its usual trick of saying ‘keep straight on the road’ when in fact what it meant was ‘turn right halfway round a left hand bend in the road’ ie a right turn but you don’t actually have to turn the steering wheel’ … Anyway, this ended up with me going round in a circuitous route, probably passing the same place twice before I worked out what was happening via the street signs!! That probably added 15-20 minutes to the journey so my arrival at 0715 on the BAA car park was reasonable.

As I’d not visited the venue before – and as usual I was the first to arrive – and the only arrival all session as it happened – I decided to take a short stroll to view the water which was only 60 yards or so away.

Firstly I walked to have a look up stream … looked at the first 3 pegs but a scattering of lily pads between the bank and open water were deemed to be a possible hindrance to the landing of fish and so I ventured a short distance downstream and the pegs there were more open and so I decided on the second of the pegs there.

All the pegs had steps cut into the bank down to planked platforms but, despite mine being one of the larger ones, they are quite cramped … at least for my style of fishing but probably better if you have one of those seat boxes to which your rod rests, bait waiters, etc clamp. I had to use my XL telescopic rod rest (1.2m-2.1m) almost fully extended and pushed into the water via a gap in the planks at the front – that was fitted with a ledger head/bar … and the rod butt was rested on my bait bag … and with my folding camping seat alongside there was not much space left and all else had to be left behind my chair and on the lower steps…

Tackle for the day…

So, first cast was made aiming about 30 degrees downstream and 3/4 the way across at 0745 with pieces of  sweetcorn on the hook…. with a few gentle trembles of the tip ensuing…

0840 … first boats pass by – two one behind other. Boats are no problem with the fishing as the water is 10’-12’ deep and so the line is well away from the hulls and propellers unless they come within 20’ of the bank really and on this occasion a protruding tree downstream of me pushes the boats over towards the centre line.

0900 … first fish of the day … a 5lb 1oz bream is landed. Unfortunately, due to the previously described compactness of the fishing stage I was unable to set up my usual camera-on-tripod to take timer operated selfies with the fish and thus had to settle to try to photo in the net on the unhooking mat by my feet … however, the fish was a feisty devil and wouldn’t stay still and managed to flap himself off the map and into the water before a photo was managed.

1015 … a change of bait to bread and another bream reaches the landing net … and a PB one at that! Weighing in at 5lb 14oz it exceeded my previous PB by all of 2oz! Luckily, this one was not as excited as the previous fish (or was very vain and wanted a photo taken!) and so do have the photo of this one … 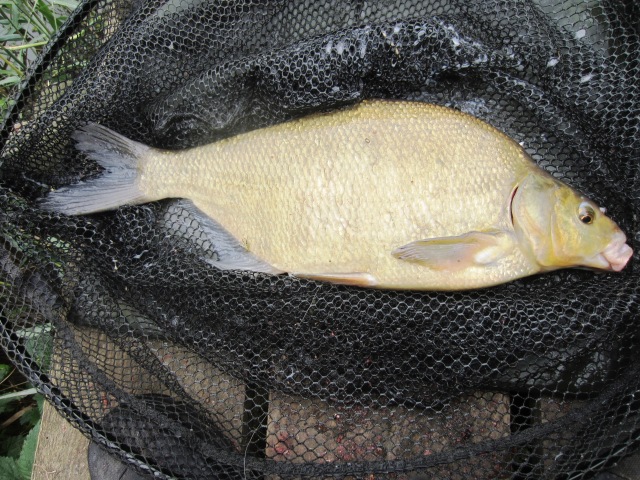 And then all went very quiet until…

I decided to travel back on the A449 rather than M5 which I thought would be getting busy by the time I would be getting on and travelling along… and all went swimmingly only getting delayed in a long queue near Kidderminster but even that dissipated far quicker than I’d thought it would do so all was good in the end.

Well, I had thought to go back to the Worcs Stour on Thursday 19th but with Shrewsbury Folk Festival due to start on Friday 27th there’s a few jobs I want to get done before then so I’ve postponed that plan now. So the next outing will be some time after our return from festival now…

BTW … Shrewsbury Folk Festival main stage is, and has been for many years, streamed live on the internet for free viewing by all. Slightly different this year as the usual seated marquees will not be in use and the two main music stages (The Cuckoo and The Skylark) are open air – and from the line-up the Cuckoo seems to be the ‘main’ with the bigger names – but the usual screened live streamed broadcasts will still be made. See Who’s On and When for timings of appearances BUT note these can often fall behind by an hour or so by the end of the day. As to viewing the streamed content, there should be at the time a link on the main web pages (Shrewsbury FF Main Page)… And if you should miss them then most are available via YouTube at a later date. Sometimes it can happen that due to contracts (recording companies, etc) various acts cannot be broadcast but these are few and far between. Search YouTube for ‘Shrewsbury Folk’ to see content from previous years….

As Steve Knightley (Show Of Hands) and John Jones (Oysterband) are co-patrons of the festival then their bands perform virtually every year and sometimes they appear in other forms/groups….. J

Tight lines to all in my absence!!