Monday, August 9th, Liz and myself set off for a day at the tench and bream pool (AA-B) … eventually as, and I expect this could come under the ‘blitherin idiot’ heading too, I’d set the alarm clock wrongly! Having been away camping a short while ago I did what I usually do before leaving the hoiuse for an extended period and turned off the power to anything not necessary to be left on – such as the PC and the various chargers I have connected in the bedroom to a multi-power block that also powers the radio alarm. I’d not needed the radio alarm since our return and thus I needed to set it on Sunday night for the Monday morning awakening… it was around 11 when we went to bed and I wanted to get up at 5:30 in order to finish off fishing preps (flasks, baits) … so the alarm WAS set to those times … at least numerically … BUT I set the 11 as AM not the PM it should have been but I did get the 5:30 correctly set as 5:30 AM … consequentially there was NO alarm at 5:30 AM as the clock now reckoned it was 5:30 PM … luckily I awoke naturally at 6:30 AM so we were only an hour behind time for the day…

So, it was around 0830 when we arrived at the pool, driving up to the far end as we intended to fish two swims up there but decided that the vegetation would be a problem and so drove back down to around the midway point which looked good. 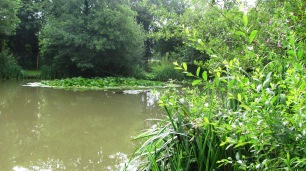 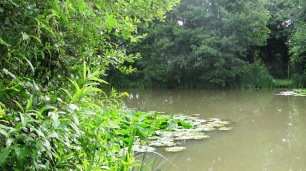 During tackling up we had a short shower of rain which lasted about 1 minutes and later when tackling down there was another similar burst of precipitation – other than that it was a very pleasant and warm day.

We both fished ‘lift method’ with driftbeater floats – 6lb main line and 6lb braid hooklengths – size 14 and 16 hooks.
Bait was mainly 2-4 maggots although I did try sweetcorn and worm which both had interest shown albeit in the form of nudges and knocks rather than proper strikeable bites.

And the homeward journey wasn’t without its ‘events’….

On the way back we usually make a left turn at a ‘T’ junction onto the Wolverhampton- Bridgnorth Road but on this trip the road was closed and we had to right turn turn and do a detour. We assumed initially for road works as there are quite a few in progress in the area but as I looked back up the road there was a police van parked up … and so we then thought it was an accident… However on return home we discovered it was due to a murder with a body dumped in a large laybye often used by lorry drivers for overnight stays, etc.

So, back at home, I searched for my walkie talkie that seemed to be missing on the day. Liz and I use WTs to converse, etc when fishing as even in adjacent pegs my hearing is severely lacking and the WTs save Liz having to scream at me when I’m needed to land a fish, etc… I know I’d had it on the holiday but could we locate it anywhere? Searched the bags, the box of tent appliances, even the camping chairs in case it’d been left in the cup holder or pockets on the arms thereof… with no result… and then ‘blitherin idiot’ on his way to bed spotted his fishing coat and waistcoat hanging up, something that had not been checked as I’d have surely noticed them in the pockets on Monday … but then I remembered I’d not worn either on Monday at all … being warm I’d just dropped both into the back of the car with the tackle when leaving the house … and not worn whilst out. So, first dip into a coat pocket and like a magician’s rabbit out pops the missing walkie talkie!!! DOH!!!!!!

Thursday 12th … a return to the Worcester Stour for me…