Thursday 3rd June saw me back at the tench/bream pool (AA-B) arriving at 0645 – and shock-horror someone was already there unlocking the gate!! Unknown territory for me as usually I’m the first on any water by a good hour or so and often by several…

No problem, the other guy decided to fish the far bank – in fact I think he was in one of the swims that Liz and fish when on that side – and I intended to fish the swim that Liz had fished on our earlier visit on Monday.

However, it was not to be as the problematic drifting catkins and lambstails of the Monday visit had congregated enough in that swim to take it out of consideration and I ended up in the swim I had fished previously. Although next door to the planned swim, a patch of lily pads worked to greatly block the ‘kin’s progress especially to about 2 rod lengths out and was reasonably well fishable… btw the pics below were taken later in the day and by and large the ‘kins had moved down the pool to the left. 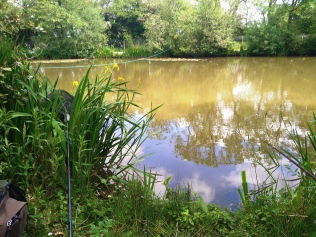 I had decided to fish ‘on the drop’ to start and set up a 4AAA bodied antenna on my 6lb mainline terminated with a 6” 6lb braid hooklength and a size 14 hook..

I had decided to just free feed this session – no cereal groundbait – and I pre-fed the swim with maggots, stewed hemp and pearl barley whilst tackling up and throughout the session added extra frequent but small supplements of maggots.

I made my first cast around 0800 with maggot initially… and landed my first fish at 0815 – a small (1oz?) perch. And then I switched variously between maggot and worm baits and cocktails thereof until 0910 landing a further 2 small perch and a small common carp of about 6oz… 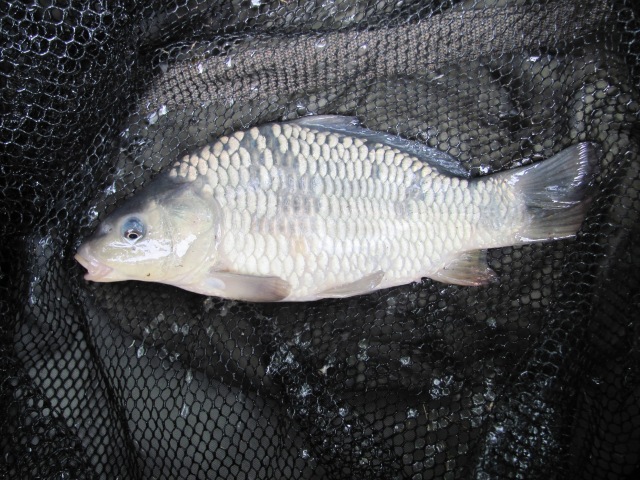 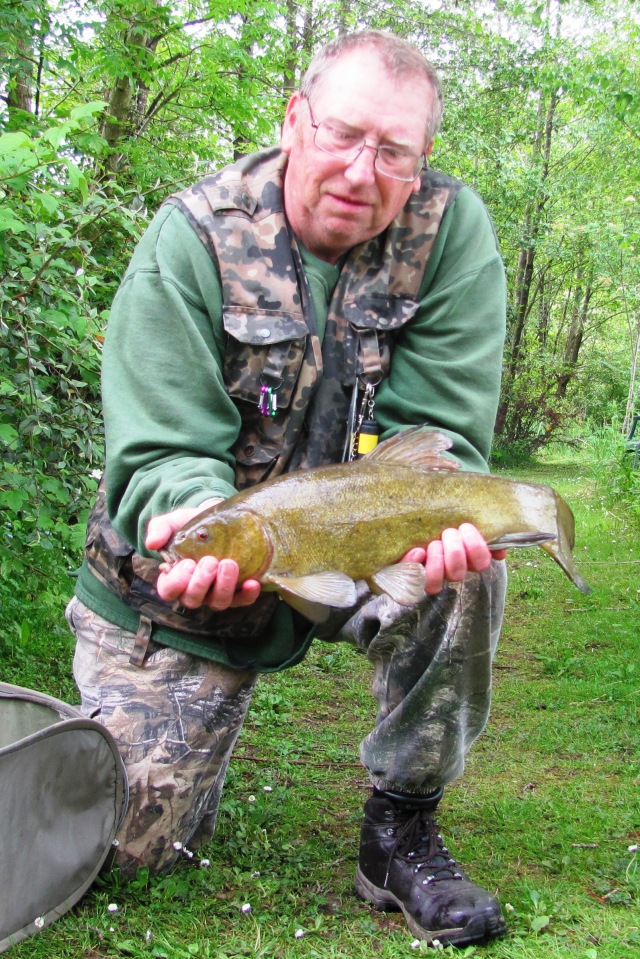 I then decided to do some bait testing – and fished for 30 minutes with each of bread, sweetcorn, luncheon meat and prawn, none of which enticed a single nibble but as soon as I cast out maggot again I had a take right on the drop – a barbel of about 12” (8oz?)

And all was, I thought going OK caught those until the chap who had arrived just before me and hence had been fishing the same length of time came around on a wander – and he’d had 18 fish by that time including 5 tench, 7 bream, a barbel … and a surprise crucian carp. There used to be a lot of crucians but its been a long time since I’d heard of a capture.

Well, final capture but not, I’m sad to say, the final take ….

I had decided to pack up around 1445-1500 as I needed to do a bit of shopping – it was Liz’s birthday the following day and I needed a card having not managed to locate one I liked in the days previous. So, around 1420, I started doing a bit of housekeeping around me, putting baits away, and that sort of thing while keeping an eye on my float and for about 15 minutes all was fine, the float hadn’t so much as flickered … but I picked something up, put it in my bag, and looked back to where the float had been – 5-10 seconds of inattention – and the float was no longer there … I struck, met a resistance and the pulling of a fish, but as the line lifted from the water it led directly to a pad of lilies on the far bank and I could still feel the jagging of the fish … and then all went slack and I thought the hook had been shed but on retrieval of the line I’d been snapped.. lost my favourite float too. From the length of line recovered it seemed the snap had occurred just above the shot, fish had probably wrapped the line around a lily pad or two, so fish wouldn’t have been tailing a long length to entangle and tether it … and no activity among the lilies either to indicate a fish caught up and trying to get away and hopefully the barbless hook will be easily shed. Just a few seconds of inattention! Won’t be doing that again!

Liz has left today to spend a week in Great Yarmouth at her brother’s – so I have unrestricted access to the car for the week … yipppeeee!

Trip 1, Monday: To a club predominantly carp pool – floatfishing and hoping for some bream among the carp … and if the carp are cruising the surface then I’ll be switching to the floater rod with Baker’s Meaty Dog Trteats for at least a couple of hours…

Trip 2, Wednesday: Nordley Pools near Bridgnorth – Birmingham AA waters, there being 6 pools there –  5 of which I would fish, the 6th being more a puddle covered in chickweed usually. On the lead or feeder…..

Trip 3, Friday:  Undecided – the most local of the all the club pools I have available or back to the tench/bream pool.

AND … river fishing season soon starting again (16th June) I’m planning with Liz to have a drive out to a BAA stretch of the Warks Avon in search of bream … although noted for its  barbel I think the population thereof is quite  sparse in this area. I’ve not fished this stretch at all before but I think it abuts the downstream boundary of a club Liz and I left this year.

And so, at this point I bid you all farewell and tight lines as I head off to grab a coffee and perhaps do a bit of bait sorting and tackle tinkering… BYEEEE!!!