Thursday 25th March at 0730 I left the house for my first fishing session at a club pool (AA-HP/I) that had been acquired early 2020 with proposed first access allowed on April 1st. However, due to the pandemic, exchange of contracts was delayed and access was not theoretically available until July 2020. It was November 2020 however before I personally visited but that trip was thwarted by a locked gate that didn’t respond to the club’s combination and I had to divert elsewhere. Pandemic restrictions returned in January 2021 which included the club closing all access to its waters altogether and so when I fished it was at other waters, etc and this was the status quo until 1st March 2021 when the club’s waters were again made available … so I re-visited the pool to attempt to fish again … and managed to do so.

The gate/padlock problem had been resolved – 1st March starts the new club season and the padlock codes get newly set for the year – plus this year the club replaced all the padlocks on the waters so the access problem was resolved.

I’ll start with the fishing report for the day (which won’t take long!) – and then go on to details of the water itself.

As it was a first visit to the water then there was no ‘special’ swim in mind – and it seems that the pool has not been fished by many people at all as there was very little sign of having been visited – and so to me the nearest swim to the car seemed as good a place as any to start especially as it was a corner swim and faced into the south-westerly breeze of the day too.

Initial casts out and around the swim with the Deeper QUiRK+ sonar indicated a slope down from the bank to flat bottom with a depth of 15’ max, mostly 13’-14’ – but with a lot of weed of 2’-3’ being detected. During fishing it seemed that there was mainly fine weed/algae with some sparser grass-like weed. It seemed strange with weed at that depth but as the water was extremely clear then probably due to that…

I set up my pair of ledger rods with 8lb line and frame feeders – one rod with a size 4 hook baited with bread, the other a size 6 baited with worm – and made first casts at 0915.

With no takes by 1100 I added a prawn to the worm baited hook – perhaps the worm was crawling into the weed? I did think of injecting air into the worm’s head to raise it above the bottom but didn’t on this visit.. perhaps next time?

1245 – still nothing so I changed the bread bait in favour of a meat and red/yellow corn cocktail. 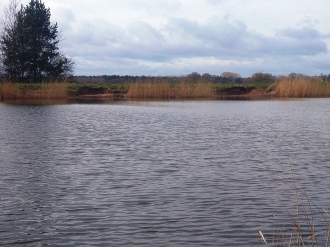 The water is an irrigation pool that can get abstracted in dry times to water the farm’s crops and is rectangular in shape and deep (up to 33’ deep) according to information on the board from its days as as day ticket fishery (ca 2005 until 2016 when its then owner passed away. 2016, the new owners decided to terminate its use as a fishery but either they have changed their minds or, as I think, new owners have taken over). In fact, the club originally obtained the rights on two pools on the site – this pool and another smaller carp pool a few yards away but the owners decided to keep the carp pool as a ‘wildlife’ pool, understandable as their house windows look out on to it. In lieu of the loss of the carp pool, it was arranged that some (about 20) pegs would be created for us on the fishable pool as the banks were steep with the top lying 5’-6’ feet above the water’s surface – and they have done so by digging out sizeable pitches that lie within 6”-12” of the water’s surface and these can be seen in the general photos and in more detail below….

However, it is possible the club may need to cut/make some steps down to some of the pitches to make them easier to get into and climb out of due to the slope of the enclosing banks especially with tackle… but the pitches are of good size and easily contained my bags, etc with room to move around ie once in the pitch then not many reasons that would mean you’d have to have to leave it.

Like another of the club’s pools (AA-KP) about ½ mile away this pool is quite open to the elements and thus could be a delight on a hot summer’s day with a light cooling breeze but a bit bleak in the colder winter climes.

As I don’t pole fish at all I’m not sure but to me it may not be a pole fisher’s delight due to the depth? But saying that there are rudd and it seems that some excellent rudd catches having been made there in the past.

So … some of those fish may have matured over the 15 years and exceed those weights now? As a lover of pike, and the pool does look ‘pikey’ with its surrounding margin grasses and reeds, I’m hoping that pike do exist in there too as despite the possible winter ‘bleakness’ I mentioned before it would be great for a short session, lightly loaded and roving around the pool with a floatfished/ledgered deadbait, fishing each swim for 15-45 minutes each before moving on to another – or possibly luring with a large plastic lure…. :)

The noticeboard shows 33’ ‘max depth’ which would explain the 15’ determination at my swim with the QUiRK+ as at the pool’s near end the surrounding land is flat and level but as one ventures down to the far end of the pool the land falls away and the pool is dammed and hence it is more than likely the bottom of the pool would follow the contours of the surrounding land and thus the water would become deeper and a depth of 30+ feet would easily fit that scenario. Would the greater depth also mean the lesser weed on the bottom due to the reduced sunlight passing through? One thing to be determined in a future visit.

Monday 29th March. Probably accompanied by Liz, two venues are top of the list, both mixed fisheries and with bream and tench in mind.