A cool misty morning, I was well glad I’d put my thermals on! The small tree adjacent to my chosen swim was dripping water and it looked like a drop of heavy was in progress but there no such thing, purely condensate falling… and it continued throughout the morning and into the afternoon albeit slackening in slightly in quantity. 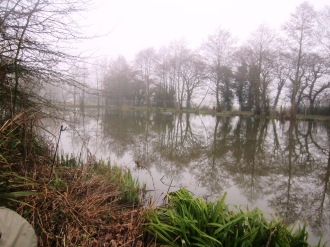 Before tackling up my ‘just under 13’ Hardy Matchmaker clone’ for fishing lift method style I catapulted out a few small pouches of half-dead maggots – they were quite old really, and although they were all of the same batch, some were comatose, some lethargic and some almost lively – but whatever, with the temperature of the water as it was, they weren’t going to be performing in the ‘maggot olympics’ once they hit the water. Also a few micro-pellets, small cooked prawns, a few small cubes of meat and some sweetcorn were added – but not a lot, all of those additions together would probably make up 3-4 small pouches in total.

Tackle, as I said, utilised my float rod, coupled with 6lb line straight through to a size 16 hook baited with maggot. The float was a crystal waggler (no insert version) overshotted by about 1AAA (a SSG shot at the bottom 6” above the hook, a AAA shot at 18” from the SSG cocked the float so its tip was just proud of the water – and another AAA shot was added alongside the first to add the required ‘excess’ weight) and this was fished about 10” overdepth in the 4’6” of water in front of me.

0930, not a single indication. So I decided to put out a ‘sleeper’ ledger rod… so the 11’ Grandeslam ‘Des Taylor Avon System’ was set up with its standard tip (also comes with a quivertip top) – again 6lb line, 1/4oz bomb, size 12 hook, was cast out to my right with 2 small cooked prawns as bait and a few prawns fed over it.

Now we come to Matty Territory – and as the famous saying went – ‘All done in the best possible taste!’

BITES OF THE DAY… 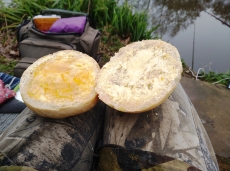 1030 Bite Of The Morning – Marmalade On Sunflower Spread

1330 Bite Of The Afternoon – Ham And Mayonnaise

Unfortunately, those WERE the only bites of the day as by 1430 when I tackled down the float had not even wiggled nor the buzzer beeped….

But more excitement lay ahead before I got home…

The area around this pool can get very boggy – and the club had issued a warning about it recently. However, area I wanted to fish was only just beyond the hardcore near end car park and that bit looked fine to me. Also it is a sheltered area in the bushes which would have been handy for ‘my needs’ if I had wanted them. Anyway, I gained access easily enough, no slippage on access and taking it easy…

Home time comes and, the car loaded up, I start to reverse out intending to do a sharp turn as I reach the main path to keep to the firm ground. However, as I come to do the full lock to make the turn I realise I’m too far over and a tree prevents the front end from making the manoeuvre – ok, so I intend to go forward and make a better angle to get on to the path …. however, I’d gone too far back, too straight and the rear wheels had dipped into an old tyre rut on the far side of the main path and consequently the front driving wheels started to spin when I tried to get out of it… so for the best part of the next hour myself and 2 other anglers tried all sort of tricks to get the car free … and after trying old carpet panels, tree branches, etc, etc I deflated the front tyres (to about 12 psi) and finally with a bit of ‘jerky rocking’ by on the clutch and accelerator the tyres eventually found some grip on firm land and I managed to escape from the grips of the rut. However, at that point I was now back to where I’d originally parked and thus needed to make the reverse turn on to the main path … and this time I actually managed to do the reversing as I’d desired to do it originally and got out on the main track facing the way I wanted to!

So, nice and steady up the track, keeping grip with the tyres on the firmer parts up to the exit gate and away.

Just had one job to do then – to get the front tyres re-inflated for which I had to drive back to the city centre Sainsbury’s, about 10 miles. Got there – that’s how I know the tyres were at 12psi – got inflated back to their required 35psi and then got back home without further incident where baits were fridged/freezered before a nice hot coffee and shower J

Currently the plans are that Liz and I will be having an outing at this same pool on Monday 22nd – parking in a safer place and with the bread crate panels along for the ride as surety.

Thursday, 25th, a solo outing for me to the pool that the club acquired access to last year but which I’ve not yet fished although I did make a trip to in November 2020 but I couldn’t get access through the gate for the car and ended up just climbing over and having a look at it before heading off to another pool just up the road.