So, after further delays to my fishing – which not only involved cancelled outings due to the weather but also further health issues as about 3-4 weeks ago I discovered a possible hernia at the point of my ex-ileostomy operation. I contacted my doctor and after a telephone triage I was invited to the surgery a few days later … and when I showed the area to the doc his first words were ‘’It’s a big one!” which wasn’t exactly promising at that moment. However, after ascertaining I had no pain or discomfort he said to carry as normal and he’d contact my surgeon to have it looked but suspected it would need an operation. It seems that hernias after such ops aren’t too unusual due to the weakening of the abdominal muscles. Anyway, he said he’d also chase up the hospital re: the 12 month review of the original op I had in Sept last year AND the 6 week/2 month review of the reversal op that was due in mid-August neither of which I have been contacted about…

Early in the year a new venue with 2 pools (AA-HP-I and AA-HP-C) onsite that was obtained by the club but delays in contract signings meant that the pools weren’t available to fish until July 4th – which fell within my 2 week self-isolation pre my reversal op on 7th July and so obviously I couldn’t fish there (or anywhere) on opening day. Following that there was time needed for recuperation and when I did re-start fishing I visited another couple of venues … but on Monday 5th November I set out at 0700 to have my first day out on these new pools.

They are not far from home – 20 minutes or so – and only ½ mile from another of the club’s pools – and so I found the venue quite quickly and drove up the dirty track from the road up to the padlocked gate that gave access to the pools. And that’s where it started going wrong… I was unable to open the padlock… re-checked the code I was using, etc but without joy. I e-mailed the club secretary but had no response even to now so not sure if it was (a) OFT (Operator Finger Trouble ie me), (b) a faulty lock or (c) the landowners had gone OTT on lockdown and changed the lock/code… Anyway access was denied for car and tackle but I did manage to club over the gate with my camera and took a few pictures… 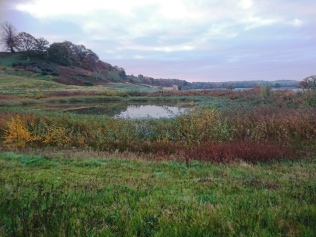 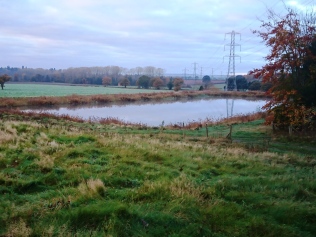 One of the pools is a carp pool – not sure if other species exist in there, and the other is an irrigation pool/reservoir used by the farmer in summer for watering his crops and is reportedly 35’-40’ deep and was the pool I intended to fish as I’ve heard, when the pools were day ticket (fishing was stopped in 2016 until we took the pools over) that this pool produced ‘slabs’ of bream and perch to 4lb+ … however, that wasn’t going to happen to me on this day!

So… I decided to head to another water instead … and ended up at the pool (AA-KP) that was ½ mile away, a pool I’d not fished IIRC for 18 months maybe longer… a nice pool in calm conditions but very open and gets cold and bleak in the cooler breezier days. However, on the day it was as flat as a millpond and I stopped off there.. and had a padlock problem again! Several attempts made, no joy – so I drove away thinking that maybe the club had decided to close all the waters… but a mile up the road I realised this may be (and subsequently found to be) a case of ‘OFT’! I’ve been with the club for getting on 10 years and never had a lock problem before BUT on this occasion for some reason I’d been PRESSING the knob that releases to padlock’s bolt instead of PULLING it! Anyway, drove back to the gate and eventually made my first casts at 0900… 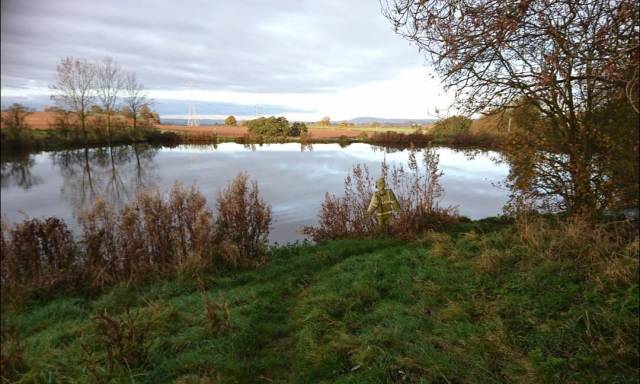 I fished two 1.75lb TC ledger rods, 8lb mainline, 18g frame feeders loaded with cereal and dead maggots with one rod with a size 6 bread baited hook and the other with a size 8 maggot/mealworm baited one. I would have used worm too if only I hadn’t left them at home in the garage by mistake!!

So first cast at 0900, last cast around 1330 – and recasting every 20-40 minutes in between – and not a single nibble all day despite fish showing by rolling and jumping!

So, at around 1400, having tackled down I had a few casts around with my newly obtained Deeper Chirp+ sonar which proved the presence of fish – but not so many in the area into which I was casting!! But then again I was more interested in mapping the pool’s bottom contours… J

BTW – Deeper do a holder for a mobile phone that attaches to the butt of the rod but charge £13 (plus usually there’s some p&p involved too) for it … but I located on eBay a similar sort of holder, meant for bike handlebars, etc, that worked perfectly well for me ….

I was going fishing on Monday 9th Nov with Liz but Liz has pulled out as she says weather is forecast to be not too good but will def come out on Monday 16th J …. and its our ‘first met’ anniversary on that day too so I may resist going out 😀 Maybe go out pike fishing on the following Thursday instead….