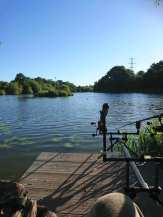 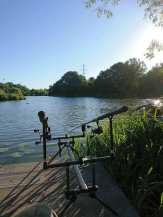 As you can see from the photos I’d decided that I’d have a change from the old float tackle and go ‘hi-tech’ with the pod and alarms putting my baits from a line just right of the centre of the island and a line just off the islands right end… distance out probably 3/4 of the way to the island itself.

Tackle consisted of my two Grandeslam Avon Plus rods of 1.75lb TC, each equipped with 8lb Daiwa Hyper Sensor line and frame feeders stopped by Enterprise Tackle ledger stops. One rod was equipped with a size 6 Pallatrax hook, the other a size 8 Kamasan Animal – both on 8lb hook lengths of 6″ connected to the main line via swivelled quick change clips with a rubber ‘jacket’ to protect.

And, after that explanation, I’ll tell you I generally use a tail of around 18″-24″ on both rods on stillwaters but this can vary with the bait in use and the type of bites. On rivers/flowing waters the tail can be up to 48″ for times especially for barbel on the Severn. Anyway, its not a ‘one size fits all’ thing, more a case of trial and error to discover the optimum on the days when the fish are being really finicky. On this trip I did lower the tail distance quite dramatically for one bait in particular –  large pieces of bread flake – when I dropped it down to 6″ or so in order that the bread would hover and waver just off the bottom (until it got over sodden and sank down anyway).

Frame feeder feed – I use my general groundbait/particle mix which consists of my dry mix of bread crumb, crushed Vitalin, strong white flour, crushed bird seed, salt, chicken layer’s mash – and to which I add at the water’s side pre-prepped particles (things like boiled hemp seed, rice boiled in turmeric, stewed wheat, blitzed tinned mixed beans, boiled maize, sweetcorn, dead maggot, etc) and wetted in this case to a nice sticky consistency in order to hold on the frame of the feeder – too wet or too dry it just flies off on the cast! Ideally, it needs to withstand the force of the cast (which should be a lob – a slow build up of power throughout the cast – rather than a macho heave-ho!) and hopefully the main body of bait still on the feeder reaching the bottom of the pool with small bits of the edibles falling off as it sinks to create a ‘column of attraction’…

0640 – first casts were made, the initial baits being worm and bread…

1000 – NOT A TOUCH … despite retrieving and re-loading baits and feeders as necessary and re-casting out every 20-30 minutes … so a change of baits ensued and the worm was replaced by meat (bacon grill) and the bread by 3 cooked cocktail prawns (with the tail lengthened back to the usual 24″)….

1050 – Beep ……… beep – a couple of spaced out tugs on the prawn baited rod… turns into a beep..beep..beep.. as the bobbin gently and surely rises …. a strike is made … resistance is felt … and what seemed to be the characteristic knock-knock-knock fight of a perch is felt … but later the fish comes to the surface … long and thin … it’s an eel! :) Netted, weighed in a 1lb 1oz, photo’d (not easy!! LOL) and set off to grow bigger….

1100 – the meat is replaced by cheese (BabyBel to be precise – bought in truth to acquire the wax coating from them to use a weighting when fishing floating baits, but the cheese itself is a good texture for bait in its own right)… and the bait that consisted originally of  3 cocktail prawns is now replaced by one large uncooked king prawn…

1245 – a good take on the BabyBel as the bobbin rises slowly and surely but on the strike nothing is felt – possible ‘liner’?

And then until I packed in at 1530 all was again quiet – and again I had been re-casting out the feeders every 30-45 minutes or so plus catapulting out small (golf ball) sized groundbait balls.

SO … saved the blank again … thanks to the eel which actually is the second biggest I’ve ever caught … the biggest having been caught during the 1978-79 season in the River Severn at Bridgnorth and weighed 1lb 8oz … and which, I’m now sorry to say, tasted delightful after being cleaned and grilled with butter….

Prawns were again a saviour!

Mr Henry Heron was, as usual at this pool, in residence all day trying hard to earn himself a crumb although I must say he wasn’t having much luck from what I saw … unlike the seagulls on the pool on my previous visit who I saw take at least a dozen sprat sized fish…

Liz and I are planning a trip out on Thursday or Friday – dependant on weather, it seems that it may be a bit wet on Thursday but… anyway, already sourced our maggots this morning for the trip :)