Tuesday 4th February at 0900 I was off to fish a stretch of the local Staffs-Worcs Canal for a session of general coarse fishing. This is a stretch that is administered by one of my clubs (SAC-SWC) and actually runs alongside one of the club’s pool waters – and beyond along the length of a neighbouring commercial fishery – and so the total length of this canal stretch is around 1500 yards or so. 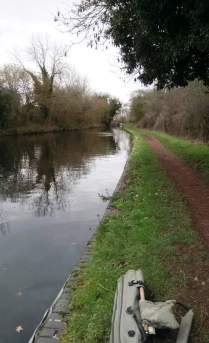 Down To The Lock

I set myself up opposite the entry to the marina – the type of place that is generically good for catching – a favourite haunt for species like perch, bream and pike in particular and I had been told, and was actually told whilst fishing too, that this area was no exception to that rule.

So, on arrival I set up the light 11’ feeder rod I use as my usual canal float fishing rod as I find commercially made ‘float rods’ these days have rings, tip rings in particular, that are too small for me as, when float fishing, I virtually always use a sliding float arrangement regardless the depth of water I’m fishing in as I just find it easier to make whatever changes/adjustments I need to do over the course of a session … and the float stop or stop knot can be felt to jar in the small rings on the cast thus effecting the casts (ie jarring causes the cast to fall short of desired OR if cast harder to compensate then the stop can sail through smoothly and overcast occur – usually into far bank overhanging vegetation!). Hence the use of the 1lb TC feeder rod with its larger rings. Line was 4lb BS, size 16 hook, and a 3AAA reed waggler completed the setup. Bait was 2-3 maggots.

3 areas were baited up with crumb, partices and maggot – along the boarding on the far bank of the main canal (as seen in 1st photo), about 3’ off the end of that boarding into the marina entrance, and about halfway across to the tall tree (so was mid marina entrance).

For the first hour or so I float fished into the 3 bait areas in turn but had not a single nudge – and when I finally got a knot in my end tackle I couldn’t easily resolve I decide to switch to the lead … well, actually I was going to use a small feeder but found I’d not packed any feeders (aside: nor had I put in my thermometer either, hence no temp readings) and so I used a small flat (‘penny’) lead of about 5g around which I packed hard balls of groundbait… Rod was a 10’Syntra feeder rod with a light quiver tip, line was 8lb BS and a size 6 hook baited with worm completed the setup.

This gave slightly better results in that at least I was getting occasional plucks albeit that no fish were hooked.

It started to get a bit cool around midday and with the lack of action … and blank 8 made … I decided to call it a day at 1230 and head home and prepare my tackle for the next outing which will most likely be Saturday 8th February and thus, due to transport needs ie a bus, be back to the same canal albeit in a different area.

Anyway, feeders and thermometer now added to the canal box!! 🙂