We’d considered three options for the venue to visit and finally opted to fish a club pool in Shropshire (KF-VV) which is commercial in type and stockings (although it is a ‘Members Only’ pool) and thus can be generally relied upon to provide some action in most conditions.

Setting off from home, with footpaths, etc coated in a good layer of frost, the car thermometer recorded external air temperature at +1.5’C in the immediate urban areas but it dropped to -1.5’C  as we entered the countryside. And the car was well iced over (as it had been for a few days previously too) and despite having been out with the de-icer spray a little earlier we had to sit on the drive for 10-15 minutes with the windscreen and rear window heaters on as well as the car’s cabin heater – but as that relies on sourcing heat from the engine’s radiator cooling system that has to get up to temp first. So it was probably closer to 0815 when we drove off the driveway…

So the outlook for the day looked poor in the terms of catching ‘bags’ of fish but at least the pool does have a good head of chub which tend to feed OK no matter how cold the water temps drop – and although absolute temperatures do play a part, the bigger effects come from delta-Temp over delta-Time ie the rate of change in temperature with respect to the change in time (the faster the temp change, the greater the effect produced). As I said the air temps had been quite cold over several days so difference in those temps was small and water temperatures change far slower than air temps – so hoping the overall effects of the fish would be minor too. 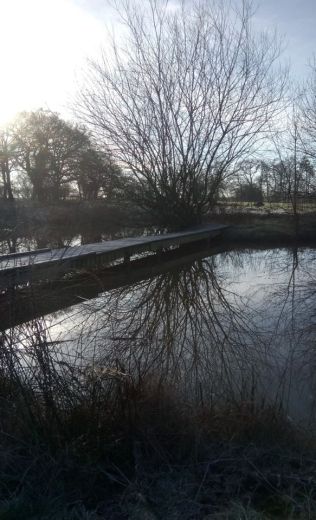 We arrived at the pool I would say around 0900-0915 and we had a quick walk up the dam wall from where the car was parked to look to see what the situation. No-one else was on the water – unsurprisingly as Monday is generally a quiet day for fishing everywhere from my experience – workers back at work after the weekend and hard at it, and others who are ‘free’ generally prefer other weekdays – Wednesday actually seems the busiest day for doing things like meeting in the pub at lunchtime with old colleagues, theatre groups going to matinees, and doing other things – like fishing! Me, Mondays and Thursdays are my usual fishing days as you’ll know.

So, the swim we had decided to fish was thus vacant (in the 2nd photo we would have fished from by the far bank conifers) – however, it was far from fishable due to a layer of ice that covered the near end of the pool up to that swim. However, the far end of the pool was ice free and fishable – and that included a channel between the main bank and an island known within the club as ‘Chub Alley’ – so as I alluded earlier to the chub’s habits to include eating even in cold times this was of course where we chose to fish.

Liz fished at the far end of the spit of mainland with maggot feeder out to the end of the island where a large overhanging bush grows and another maggot feeder out into open water… myself, I fished parallel to a wooden bridge that crosses from the mainland across to the island (Pic 1) as there is an overhanging bush slightly to the right of the far end of the bridge (just out of pic) and fishing close to the bridge itself is a good area for perch. I floatfished with maggot and worm. 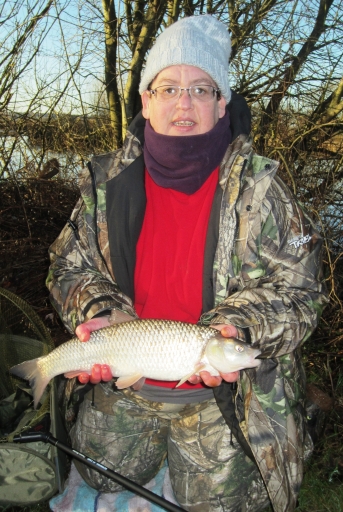 Myself, I floatfished for the whole session. Firstly, with maggot without a single touch and then latterly with worm with similar results at the start. I started my fishing a 5AAA antenna waggler with a bulk of shot about 24” from the hook, and the tell-tale shot 6” from the hook and a couple of trimming shot midway between the two groupings and the hook/bait was presented on the bottom. However, the float did drift slightly and so, after fishing with worm for an hour or so to no effect, I added an SSG shot tight to the telltale shot, removed one of the small trimming shot and increased the depth I was fishing at by about 12” – thus I was now fishing overdepth and slightly overshotted and needed to tighten the line to cock the float – so almost, but not quite, lift-method style. So now the bait was anchored to the spot and no longer drifted. And this proved to be an improvement in that I now started to get bites … float rising slightly in the water and then travelling along, often against the drift/breeze. However, although at least some of the bites were ‘unmissable’, they were all missed even after allowing longer times between indication and strike! Possibly small perch just grabbing the worm’s head or tail? Anyway, 1500 came and it was packing up time and the tackle was put away… and blank number 5 of 5 trips made so far in 2020 was concluded…

But it wasn’t the end of the day’s fun and games… oh no, far from it!!

Got to the car, loaded up the gear, Liz went and unpadlocked the gate while I did the final loading and shoe changing … got in car and started to drive away … and the hard frozen ground of the morning had thawed … and I experienced the dreaded wheel spin!! Got the bread crate panels I always carry in the car at this time of the year to park upon to prevent the problem – thought the ground was OK so didn’t use them BUT seems I’d reversed just 24” too far and on a slight upslope – and tried pushing those under the wheels but still couldn’t get a grip. Ended up deflating the tyres from their usual 44psi to 8psi … and managed, by pulsing/rocking backwards and forwards to finally get a grip and manage to make it too the hardcore tyre tracks… but now I had to re-inflate those tyres back to 44psi – and that took 45 minutes..  but at least we were back on track (excuse pun) and headed home … where worse awaited us…

Got home, decided to reverse car up the driveway to make unpacking easier by dropping it all in the garage until the morning … but managed to reverse TOO far and went straight into the front porch’s sliding aluminium doors…

So, this morning, I was straight on to our house insurance, our £100 excess paid up, surveyor coming on Thursday (23rd) morning between 0800 and 1300 to assess damage and hopefully arrange fitting of new doorway…. Doors opened to the current full extent in the pics due to buckled framework and its a bit of a squeeze to get in/out…

OOH…. I forgot to mention one other thing…. Whilst folding down my rod at the end of the session I discovered 3 reasons it didn’t seem to be casting too well…. (A) the line had a knotted wind loop in it which would have snagged in the rod rings on each cast… (B) the line had been misthreaded through one rod ring – through the frame of the ring rather than the ring itself… (C) one rod ring had been missed out completely when the line had been threaded. AND (B) and (C) at least must have been like that for the previous 2-3 sessions when the rod was used as I don’t tackle down, just unplug the rod’s sections, fold over and velcro them together…. Anyway, will be rectified as I need to put on new line due to that knot….