Monday 12th August I eventually made it back to the waterside! Yipppeeee!

The delay was due to several things – as said the weather was forecast to be bad on the Thursday after my last trip out and I did, indeed, use it as a groundbait mixing day making up 7 x 1Kg bags of my base mix. An easier job than it used to be as I’ve bought a paint/plaster stirrer paddle for my electric drill. In the old days I used to have to mix up each Kg individually to ensure a proper mixing – and as my mix consists of 6+ ingredients then it would have meant at least 42 individual weighings and mixings the ‘old’ way. With the paddle I just weighed out the ingredients (7 IIRC in this batch) as needed to make the end weight into a large bucket and whisked with the drill/stirrer combination – job done in no time! Actually, I would have made more but had to work to the lowest quantity ingredient I had in stock.

Other delays were due to a few hospital appointments and finally, a big teaser one, to visit friends from London who were on holiday near Stratford-on-Avon – on a private holiday park and their lodge was right next to the river – and, in fact, it would have been an easy cast from their patio area into the river albeit having to cross a footpath so people passing along might have been a nuisance! LOL. Suffice to say the friends aren’t fisherfolk either… what a wasted opportunity. Several people were fishing along the stretch though – although all appeared to be float fishing and the closest couple, a young couple, were catching but only minnow sized silvers from what was observed from our location.

Anyway… I have now got back into the swing … hopefully!

The venue for this outing was a club pool (KF-VV) that I had not visited in a while … and was actually longer than I thought as the club’s membership year runs from 1st April to 31st March and the gate padlock code changes at the start of each new year and I had to look up the code printed on the membership card and didn’t recognise it meaning I’d not fished there since at least the end of March!

A nice morning – mild, calm, dry – the first for a few days the previous week being windy and wet and apart from a short but sharp shower at around 1400 it was like that for the full day.

On arrival at around 0745 I was the only one there, around 1100 a father and son couple arrived and fished on the far side of the pool on the other side of the pictured island but had left by around 1400, and on leaving there was someone fishing on the dam wall, out of sight to the right from my position.

This pool I generally floatfish but as Liz wasn’t with me I ‘stole’ her swim (as seen above) to do some frame feeder fishing putting one bait (bread mainly) out towards the left edge of the island (ie a little way left of the light green bush straight ahead) and another (worm/maggot mainly) further to the left, and closer to me, under the dark tree reflected in the water.

Feeder mix was per usual … base mix mixed firm with added hemp, wheat and turrmericed rice, and dead maggot.

First casts were made around 0830 … and first fish was hooked at around 0850 on bread by the island. Unfortunately, the hook lost its grip as it came to the net but I saw it was a common carp probably around 4lb or so.

Over the day, bites came frequently ranging from full scale runs to tentative small pulls on both rods. Some fish hooked, some lost to hook pulls, and some landed… and most were taken on the worm/maggot rod.

The latter fish being a bit of a disappointment as well as a source of elation…. I’d not had a decent fish for a long time it seemed, let alone a double figure one (and that includes pike) … and when I put this fish on the scales they went down to 10lb 8oz initially … BUT … I’d laid the weighing sling over my Fastmat (a bit like a carp cradle) to put the fish in … consequently it sank inside and when it and fish were lifted out it contained an amount of water … and as the excess water drained the weight dropped accordingly … 10-06, 10-04,…., 10-00 (stop now I cried!), 9-14,…., and finally came to rest at the recorded 9-08. 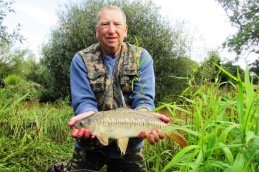 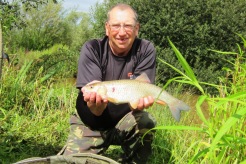 So, although nothing huge graced the net, it was a very enjoyable day especially as I prefer to catch a ‘mezze’ (a greek meal course made up of many small dishes rather than just one main dish – can be sort of a ‘tester’ as it usually contains small portions of all the items on the full menu)or ‘pot pourri’ than just one or two species over a session regardless of size …. and I did have a gudgeon drop off the hook whilst swinging in too!

Well, tomorrow (today being Wednesday 14th) I’m intending to return to the local pool as its a ‘pick Liz up after work’ day. Interesting fact – someone has had a pike on a Robin Red pellet … unusual in itself BUT even more so as a mate of mine when asked a short time said there were no pike or not enough to bother about in there – and someone posting in response to the report of this capture said he’d been a member for 13 years and this was the first pike he’d ever heard of being caught there… I’ve also heard that there are catfish in there… So I know to big bream, perch, carp, eels, crucians, silvers, etc in there now plus the odd pike and some catfish… seems a good pool! :) Heard now that the pool might be closed for fishing from 26th August for a while too … the Canals and Rivers Trust are dropping the water levels to effect some maintenance work….