Monday 22nd July and I visited a club pool not often visited by me – AA-LA1 – despite being the club’s ‘premiere’ carp water. Reasons for the lack of visiting by me include (a) I’m not a great devotee of carp but occasionally I do go carp fishing in its wider sense of fishing for carp rather than the usual fishing for ‘mahoosive carp’, (b) its a fair distance from home and so time constraints play a part as to when I can get to fish there and (c) although it holds species other than carp (perch, tench, eels) of good size and, seemingly, one solitary bream of around 8-10lb, it is usually a ‘hard’ water and gives up its stock, inc that of the smaller residents reluctantly. 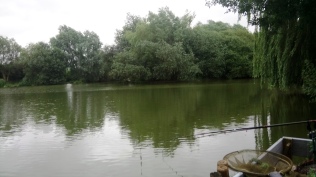 As for title of this posting – well, the farm on which the pool is situated takes it’s name from it’s religious neighbour next door…. although the pool’s is known within the club by the name of the religious establishment itself and which, incidentally, has a pool within its own grounds albeit, by looking via Google Earth, fully weeded…. There is also a second, smaller, pool (AA-LA2) just below this one of ours that is included in our lease but it is never fished as it is basically unfishable – banks overgrown (way beyond a quick slash with a scythe level, more like JCB), the one bank whereby the water could be accessed has one, and only one, possibility, a scaffolded platform placed there by a previous club many years ago with wood so rotten that even a damsel fly landing on it causes pieces to crack off. That plus actual access problems (think the gate is padlocked with a non-club padlock) and the fact that the farmer’s son has leased it to a duck shooter who ‘will not be happy with people disturbing the birds’ and it seems very shallow and just hold small bits and lots of small (2lb) jack pike… means that the club has never bothered to do anything with it, preferring to spend the time and money on the main pool. Liz and I fished this smaller pool once with lures (8 years ago?) but didn’t have a touch.

So, I arrived around 0730 to find a car already on the car park area – heart in mouth thinking my desired swim will have already have been taken – but it seems not as the angler had turned in the other direction and was fishing at the near end of the pool – and, I think, it was the chap I’d seen on the pool I’d fished in Session 28 as I know that has been an area he’s fished before and given the distance the features that could be discerned re build, hair, etc seemed to match his.

Happy to find the swim free I drove round to it, it being one of the few swims accessible by car, the only other on my bank being the next door swim to me which got occupied around 1100 by a ‘carper’ (carp cradle on 7’ tripod, bait bag on tripod, bivvy, line wrapping sticks, etc, etc). On the other side of the pool is another swim with a parking area at the back – although it could be to set up a bivvy!

So, my swim – a two-peg swim so plenty of room to manoeuvre around – or as anyone who knows my usual swim housekeeping, scatter my tackle and bags around all over the place! Immediately to my left a large overhanging willow tree (first pic) and to my right another willow tree further over (second pic) and out from that second willow tree is the end of an island.

My intention, as stated in my last session’s posting, was to spend my first half of the day (0815-1130) float fishing just off the outside of the left hand willow and the seconds half fishing two frame feedered rods out in front of me in line with the direction of the island (ca halfway out).

All prepped and plumbed up, the first cast was made with the float rod starting with a size 16 hook to 6lb line, laid-on with a 5AAA driftbeater and using maggot for bait was made at 0815 and the first bite of a ‘bite a cast’ session soon started. In fact, if a bite wasn’t seen for 15 seconds I knew the bait had been stolen and I was what we call ‘baitless fishing’ which can be hard work, although not necessarily without reward as at times I’ve had perch take a bare hook on retrieval. Later I switched over to a size 10 hook with worm for a short period and then switched back to size 16 and maggot. Plenty of bites but many missed, many tiny silvers hooked but which flipped off the hook on swing in as there was not enough weight in their bodies to counter their flipping but some of same did get landed …. and several perch in the 4oz-7oz range… So no major sized fish were caught but it was worth the trial and perseverance as I have had decent fish from the spot in the past – and a crowd attracts a crowd. 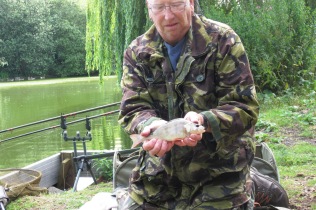 1100 – as I said, another chap came and set up his carp stall – and 3 hours later he was still setting up his stuff!!! I hope he intended to stay overnight to make that effort worthwhile… and I thought it takes me a while to get sorted before first casts as unlike many I get everything I think I’ll need set up and laid out around me so that there’s no ‘oh, not set the landing net up!’ or ‘where’s my scales?’ moments and resulting panics! Although one thing I usually miss is my disgorger … I have an available set of forceps but sometimes, especially with small perch, the hook is a little too way back out of reach with those (although – touch wood – visible and not deeply hooked) and thus a disgorger is needed.

1130 …. out went the frame feeders … 1330 …. retrieved untouched and recast … 1530 … retrieved, again untouched, tackled down to go home…. so not a great success and perhaps I should have stuck with the float rod as I was at least having action and larger fish could have moved in…. also Mr Carper, next door, to my best knowledge, was having no better luck or at least I never heard his alarms beep out….

What was a bit weird, given that it was quite a hot bright day, although with strong’ish winds at times evidenced by the various tall trees around the pool swaying and playing quite violently – but those trees also sheltered the pool itself and the surface, at worst, was orange peeled rather than rippled … and so I would have normally expected to see at least a few carp cruising, leaping, rolling or bubbling – but all day long I did not see even one of these signs although there were plenty of dipples of small silvers sucking flies of the surface, etc and scatters of the same as perch attacked them all over the pool and all over the day. Ummmm, go figure….

Anyway … as I said, it can be, and often is, a hard water so catching the few smallies was a little bit of success and saved a blank session.

PLANS: Thursday 25th I’m returning for a 4th visit to the ‘new’ pool (SAC-DP) to try to actually convert a bite into a landed fish. I’m hoping that I’ll be able to get the same peg as I fished from last time as it seemed to be productive for bites but this time I’ll use the feeder rods right from the start. And I’ll also be taking my floater rod and biscuits and a loaf of bread so that I’ll be able to try for some of the cruising fish that were around on the last visit especially as over the past few days the temps have risen further and, as I write this at 0630, the current temp is around 20’C and forecast to rise to 26’C … and on Thursday rise even higher to 31’C …. and for the following 10 days or so be a bit cooler at around 21’C-23’C but still too hot for me … especially at night when my legs twitch and jerk due to the heat and prevent me sleeping (and the bedroom’s pedestal fan is usually on full blast and all upstairs windows and doors are wide open trying to get some air movement). Last night I was up at around 0200 drinking peppermint tea which I find helps a bit … or maybe its due to the exercising of the legs by going downstairs to make it … and then watching and videoing the sheet summer lightning over the hill at the back of the house for the following hour….