Thursday 4th July, I set off at 0530 for my club’s water on the Warwickshire Avon (KF/A/WG) arriving at the water’s edge, after unloading the car and getting to my chosen swim – which was 50 only yards away – just before 0600  :) 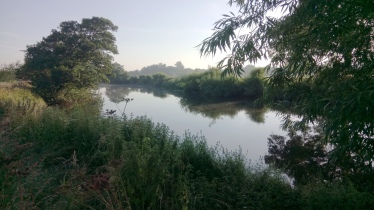 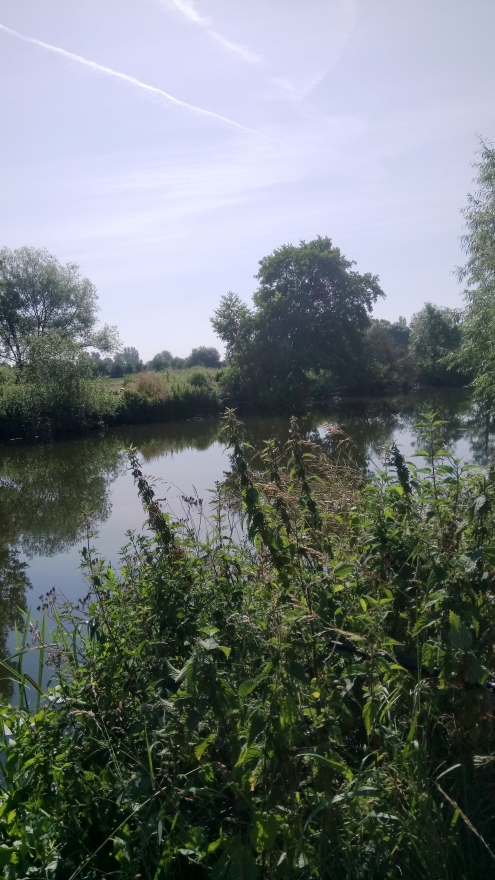 Primary target for the day was to be bream with the hope of a 6lb+ to break my current 5lb 12oz personal best record… and to that end I fished with a 12’ quiver tip rod (Ron Thompson Evo 360) with 8lb main line, 8lb hook length with size 10 Kamasan ‘Animal’ barbless eyed hook and a 20g cage feeder on a running 6” link of 6lb line stopped about 18” from the hook.

At this point I’ll digress a bit to talk about what I mean by ‘cage’ and ‘frame’ feeders as I’ve needed to place some of each on order as home stocks are getting low and the searching of eBay and Google has thrown up several different versions of each. So here is what I mean by the terms…

OK … this is the type of frame feeder I use … body/framework is plastic and bottom ‘bullet’ type weighting is 15g on the model I use.

Used in stillwater, when loaded with groundbait it provides plenty of weight for lengthy casts but on retrieval it is light enough to lift from the bottom to clear snags – one a couple of waters I fish swan mussel shells can be a problem, and can cut the line with their razor sharp edges if the weight/feeder drags along the bottom. Also there is so very little weight incorporated into the feeder itself that the fish are freer to fight and the playing is far more tactile. Also, almost 100% of the attached feed is available directly to the fish.

Its an ‘old’ version of a method feeder really – and can be used in similar manner if wished (and I don’t) – but, unlike current ‘inline’ method feeders, it can be used on a ‘resistance free’ running link.

My 2nd choice feeder, used for stillwater and slow running waters. I generally use in the size range of 15g-25g. Releases the feed more slowly and not as good as the frame feeder if larger particles (eg corn, whole pellets, etc) are part of the groundbait mix as, as the name suggests, the contents are ‘caged’ so larger particles will not escape naturally (ie either only come out on the retrieve or get slowly washed out if any water current is present. And contents are not immediately accessible to the fish until they either soften and ‘flow’ out or the fish nudge the feeder.

I do on occasion use other feeders (eg heavy river feeders for use on the Severn (like the cage feeder but far heavier and flatter in profile), maggot feeders (like a drilled and weighted plastic tube with end caps – the weighting can be either, like the cage feeder, a lead strip or fitted as part of one of the end caps).

You may note I used 8lb main line and 8lb hooklengths instead of a straight through arrangement. This is purely due to the fact that I like to use quick change hook length connectors for several reasons…

OK … so at my swim – which has a high (8’), almost vertical bank and so you need to fish from the top meaning that a long, 2.5 metre minimum landing net pole is a necessity – and my new 1.8m-2.8m Korum Adjusta-Net pole proved absolutely perfect for this. Also a long, 12’ minimum length, rod is good as it allows the feeder/bait on retrieval to be swung in over the marginal lily pads – or for fish being landed to be drifted in on top of the pads to the landing net. On my first visit here several years ago I turned up with 10’ and 11’ feeder rods, the 10’ was totally unusable as the end gear just snagged the lilies or the vegetation growing out from the bank and end result was usually snap offs to get free … the 11’ was far better although still far from perfect and several snap offs still resulted. With the current 12’ then snagging up has been minimal and usually those that have occurred have been freed without breakage. 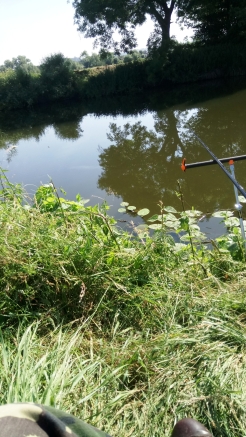 First couple of casts I let sit for 10 minutes in order to lay a feed trail before retrieve and refill of the feed… and third cast saw the first sign of piscatorial interest with tremors and small plucks of the tip … then after continuing the 10-15 minute cast regime, with small plucks noted on every cast, I hooked into a fish and landed a nice chub, duly weighed at 2lb 2oz … at which point I realised I’d not photo’d it before release … ‘oh well, I’m sure I’ll have more and better fish today’ … and now you’ve already guessed the way this tale continues??

Anyway, over the next hour or so, whilst still getting plucks, I engage on a series of bait changes trying bread, macaroni cheese (NOT the tinned stuff, far too soft and flies off hook on the cast oir just falls off under gravity if taking too long casting. I’ll explain what mine is at the end).

0915, first boat of the day travels upstream … no problem, cheery wave and all is well … and I expect a change in the bite rate due to (a) churned up micro-organisms (albeit the river is 15’-20’ deep in centre, even at edge of bank its 5’, and a yard out 12’+ so unlikely to have much effect in that way – even the bankside lily pads barely move from the wake) and (b) oxygenating the water. And there was a bite rate change … for the worse … usually 15-20 minutes to the first plucks instead of the previous 1-2 mins at most.

Fished on for the next three hours with more bait changes (sweetcorn, back to bread, back to worm)… still slow and boat traffic increasing … and at one time I had two boats, opposite directions, passing in front of me and at another time a small cabin cruiser overtaking a canal boat…

Canal boats are fine … but sure every cabin cruiser was doing over the 6mph speed limit and one would I’m sure would have clocked a speed cam had be been on a road! However, one did attempt to be mannered and slowed as he saw me, drifted past over towards far bank, and then sped up again when well past albeit he wasn’t massively overspeed anyway.

1200 a careless driver, in a cruiser, went over and cut my line – don’t think he even saw me, although had I my catapult and maggots at hand he would have received a ‘belated message’ within a few days… ;)

So, I re-tackled and then fished on until 1500 changing baits (inc raw prawn, luncheon meat as well as re-trying the previous baits) and even tried dropping a line with a prawn piece just off the edge of the lily pads in front of me in the hope of enticing a perch but to no avail…

1500 … tackled down … headed back to car in order to drive back home and collect Liz from work. I had the option to either take the A449 or the M5 to get back so, due to the time I decided to head to the M5 thinking I might just miss the heavy traffic but if not then I’d come off when convenient and head across to the A449. However, the motorway was running freely until J4 and I hit some roadworks, not severe though and I hoped that they would quickly come to an end but they kept on and on to J3 at which point (a) I was in outside lane and unable to get across to the exit and (b) it probably would have not been much better timewise… so I stuck to the M5 up to J2 which was my leaving point anyway. Once off M’way local traffic was reasonable and I reached Liz’s place at 1700, with time to pop in for a cuppa in the cafe (she works in a Sainsbury’s cafe) before she finished for the day at 1730… then on to KFC for our evening meal … then back to Sainsbury’s as she’d left her mobile behind! Anyway, did get home directly after that.

PLAN FOR MONDAY 8TH JULY: Off to the tench pool with Liz – a bit of a walk to the pool from the car park so we’re planning to merge tackle (eg she’ll put her wanted odds’n’ends in my bag, take 1 rod holdall between us with the 4 rods in, 1 bait bag and the unhooking mat (which is also a bag)… and take lightweight camping chairs instead of the usual fishing chairs. Have to check weather forecast but unless rain imminent then think brolly will be ditched as a bit weight saving too.

So, my home cooked version … easy to do … all that is needed is macaroni (or really any pasta as suits your whim a it should be effectively the same thing, penne being like super-macaroni sized, etc), a pan and water, a packet of cheese sauce … a sieve … and a plastic bag to store the finished product..

To do … Bring water to the boil, drop in required quantity of macaroni, boil for as long as it takes macaroni to start softening (don’t forget that it will keep softening after removal from the heat and water), sieve from water and put into the plastic bag while still damp and hot, tip the cheese sauce powder into the bag, seal top of bag and shake well to coat all the mac… Leave to stand to cool … Hopefully, it should now be OK … but if its gone too soft then tip the mac onto a piece of paper towel on a tray in a warm ventilated place (the greenhouse usually in my case) and leave until right…. Stores well in the fridge….

One response to “Session 25 – Back To The Warks Avon…”