Thursday, April 11th, on a frosty morning that required the car’s windscreen to be cleared of a thin layer of ice, I set off at 0645 to a local club pool (AA-GH). 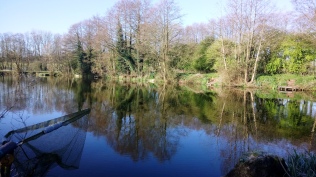 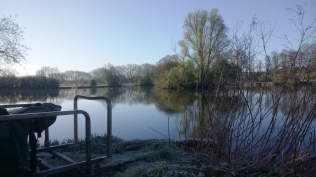 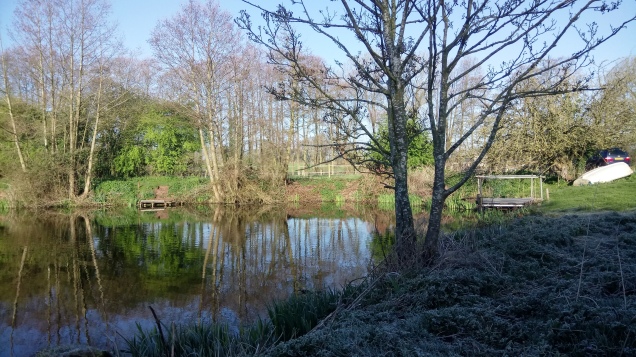 As the weather forecast had said that it was to be quite a calm day (3-4mph breeze) I had decided to floatfish for bream and to also set up my ‘floating bait’ rod for any top feeding carp that may turn up. So, I set up both rods and made my first cast with the float rod in to the 12’ depth of water in front of me, laying on with double maggot on a size 16 hook at around 0745.

At the start of the day it was calm as forecast but by midday the breeze, from the south, had picked up considerably and probably added another 10mph to that expected … but all was OK as I just changed my original loaded bodied antenna float to a larger driftbeater and all problems were resolved.

A few nudges on the maggot but nothing major led to changes of bait (bread, worm, macaroni cheese) and hook (to a size 12) didn’t get any more success although there were at least takes that were strikeable at with the bread despite not connecting to a fish.

BTW – macaroni cheese wasn’t a noteable success – if it even managed to get placed on the hook ok, it invariably fell off on the cast. I remembered my Dad in the 80’s using mac cheese in a club competition on the local canal in the 50’s (but don’t know if he caught on it) and thought I’d give it a try after spotting a tin in the supermarket the other day. Unfortunately, the tinned variety is far too soft and, as I said, either split on trying to put on the hook or flew off on even the gentlest cast. However, not to be beaten, I intend to get some ‘raw’ mac to parboil to leathery soft and then sprinkle a cheese sauce powder into it – add the flavour and also should soak up some of the excess moisture – possibly add a sprinkling of fine cornmeal to keep the mac firm but hookable if need be…

So, the float fishing wasn’t a great success but around 1300 I spotted a few BBSs (Big Black Shadows) cruising under the surface and the float rod was put to one side and the ‘floater’ rod baited up – basically, just 12lb main line straight through to a size 4 hook in its simplest form but I do generally add a ‘sausage’ of wax gathered from BabyBel cheeses or the Xmas cheese truckles about 2’-3’ above the hook which adds weight for casting, thus alleviating the need to soak the usual bread bait to create enough casting weight but softens the bread too much so it flies off on the cast easily – and the wax does float and act as an indicator – and, if you should use links to able to add hooklengths, if wrapped around the link it easily supports it on the water’s surface and prevents it sinking and dragging the line down….

A few bits of crust catapulted out showed that there was interest in surface food and shortly after casting in a 5lb 5oz mirror carp was netted…. 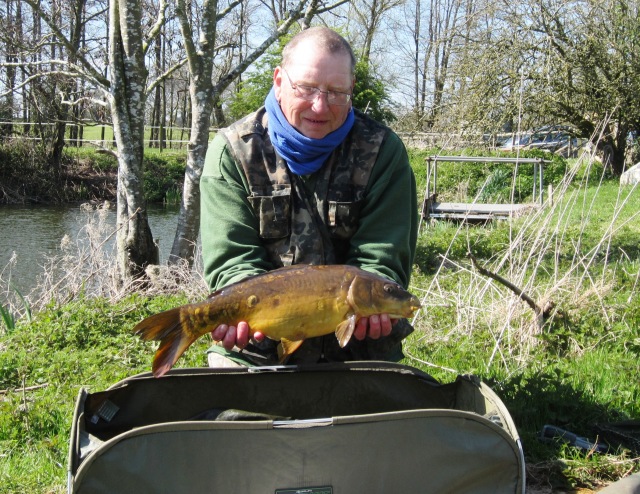 However, the good times soon vanished as a few, and one in particular, geese also located the area of the bread freebies. And this one goose, on its own, virtually destroyed any chance of another catch for, as soon as I cast out, it locked its targetting to my bait absolutely! Even to the point that at one time I even sat there for 15 minutes plus without my bait in the water until said goose had moved 200 yards or so away … and as soon as my bait hit the water, goosey turned back, and ignoring 10 or more pieces of free floating crust that it passed enroute made directly for my hooked bait … and even twitching the bait away from under its nose, which usually spooks any duck/goose, it just gave chase all the way back to the bank or until the bread fell off. And I also had forgotten to pack my dog biscuits which, usually anyway, seem less prone to be of interest to any water fowl although in this case I wonder…..

So, the rest of my fishing time until I packed up at 1545 was more taken up with the avoiding of that goose than it was attracting any fish….

We filled in the forms for the joining of the new club last Thursday as said in the previous posting and will get our cards soon ready to start membership from May 1st – but we will be away on holiday until May 6th so won’t be able to make use of them until our return.

On Sunday (14th) Liz and I are off to the Stoneleigh County Showground in Kenilworth for ‘The Big One’ (https://www.thebigoneshow.co.uk/) – an angling show/exhibition with ‘the stars’ in attendance (eg Des Taylor, Steve Ringer, Andy May, Jeremy Wade, etc) and stalls from most of the major angling suppliers… and Sunday May 26th we’ve tickets for the Barbel Society’s ‘The Barbel Show’ being held just down the road (well, 15-20 miles or so) in Telford (https://www.thebarbelsociety.co.uk/barbel-show-2019/).