Tuesday, December 4th, exactly three weeks after my previous outing I managed to make it back to the banks of a water once again. The gap between visits was due to several factors – had a bad cough/cold, events (birthdays, rock music weekend in Pwllheli, etc), Christmas chores (present shopping, etc) and having our driveway re-shaped and laid – and the damned lousy weather wasn’t exactly compelling me to get out there either!

Anyway, mid-week I decided I was going to get out there whatever on the Friday – I did – and glad I did! Apart from quite a hefty early morning frost (air temps 2.5’C on the way to the pool), the day was almost late summer’ish with clear blue skies and a golden sun and barely a ripple on the water and it was quite pleasant for most of the day until around 1300 when the sky became more overcast a slight breeze picked up and a slight chill was being felt.

Destination for the day was Pike Water 1 and, obviously, pike were the prey.

I left the house around 0700 and arrived at the water a little after 0730 … and as the first there (another arrived around 1130) I had a complete choice of swims and so I got the one I’d intended to fish without problem.

Before tackling up I threw out some ‘rubby dubby’ in the form of breadcrumb, a bottle of ‘Fish Sauce’ (which is basically the juices of crushed anchovies – very fishy smelling) and chopped up pieces of old stocks of sprats, etc – and then I cast out my Deeper Sonar to ascertain if there were fish around and …

… it seems that there were! The scale shown is in metres – so in proper money the depth of water was around 13 feet with the fish lying between 2 feet and 10 feet … other casts/scans around the area gave similar results.

So, with that information, I decided, that was the range  of depth to place my baits in. However, as I had no maggots to catch live baits, I was to use dead baits and I’d taken a fair selection – herrings, mackerel and sardines for the larger baits with sprats, smelt and capelin (a member of the smelt family but silvery rather than the smelt’s orange hue) for smaller bait use.

First baits, cast out around 0830, were 2 half herring ones – head half on one rod, the tail on the other – set to work within a depth of 4’-6’ and drifted along in front of me.

After an hour or so, having had no response, and thinking possibly that 2 halves of a big fish drifting in mid-water may not appear natural, I set both rods to fish their baits on the bottom over the rubby dubby – and at 1000 I had the satisfaction of hooking into a pike which had taken the tail end bait… It was successfully landed albeit that it decided to emulate the tactics of an eel and spin in the net – result was that it made the unhooking easy as the hooks had come free (but now embedded in the net mesh – but as I use barbless or squeezed down barbs that wasn’t a major problem) BUT the pike’s head was enclosed in a multi-wrapping of mesh and the mesh had also passed over the lip bone’s ends which I was not able to free by manipulating ‘over and off’ and thus had to cut some of the meshes. Still, it was done quickly and with minimum fuss and actually with minimal damage to the net itself… so all good in the end…. 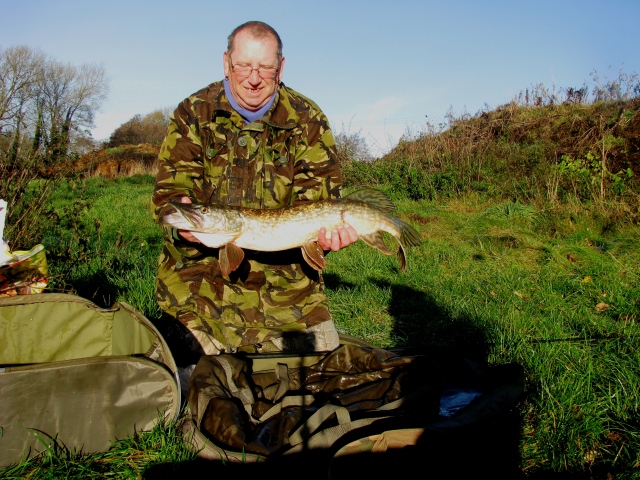 However, after a further hour with no further interest shown I switched back to fishing mid-water with sprat and capelin baits set up as what I refer to as a ‘Xmas Tree’ – multiple baits (3-5 sprats, etc) on each trace as to emulate a mini-shoal of fish – and is a tactic that has provided results in the past. Anyway, to me, a shoal of small baits looks more natural than a half big dead fish at mid-water… I thought I had ‘discovered’ this technique actually until I read a book from the 50’s which described the same sort of thing although actually using minnows for chub… Nothing is new in this world is it?

At 1315 with no further action and a chill starting to drop – along with the forecast of heavy rain later – I decided to tackle down the bait rods and have half an hour or so with a lure – which I did but again with no response.

I’ll probably not be out again this week – more jobs and commitments to be honoured – but hoping to do some fishing on Monday or Tuesday of next week as an improvement in the weather is promised too, so possibly I’ll be doing some pool fishing for chub and perch 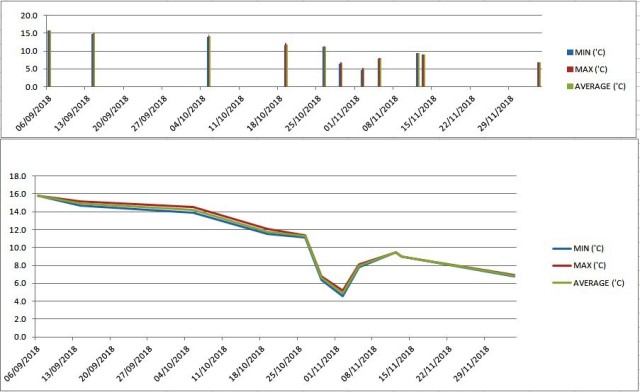