Friday 24th August, was a cooler than usual morning – car registered an external temp of 10’C for the entire journey from home to fishery and it seems it had dropped to 7’C overnight. I even had to put the car heater on! I know its not majorly cold per se but after the long bout of hot weather that we’ve had it was a bit of a shock. However, when the sun came up later the temps did rise.

Anyway, destination was a club carp pool (AA-LA1) although I wasn’t planning on carp fishing primarily – I planned to float fish (perch, tench, etc) for the first few hours by starting fishing with the float rod from around 0730 until around 1030-1100 whilst regularly baiting up the carp swim further out with small balls of groundbait, etc at 30 minute intervals, and then switch to two ledger rods with frame feeders for carp for the rest of the day (around 1530-1600).

So, the day started off OK – the float rod and the ledger rods were both set up ready for ‘the plan’ and I even put out my WaterWolf camera on a 3rd rod just out from the bank on a 3rd rod – which I’ve just reminded myself of as its still in my tackle bag and I need to get it out and transfer/scan/edit the recorded video. However, the plan deviated slightly and in the end I only had the carp rods out for about an hour if that … but more of that later.

As the first there I had choice of swims – another guy came whilst I was tackling up and I think he he’d intended to fish my swim and he settled in the next door peg, no problem as well spaced out – and I chose one of my usual three, next to an overhanging willow tree, which usually gives up a few fish of various types having had roach, tench, perch and even an eel at various times. 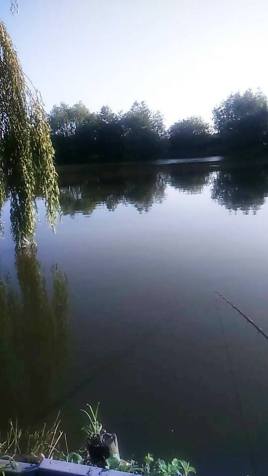 Tackle on the 13’ float rod was 6lb main line, size 10 hook on a 6” 6lb braid hooklength with a 4AAA wind/driftbeater float fished lift method in the 5’/6’ of water just off the edge of the willow trees foliage.

[I did note that the leaves of the tree were beginning to fall now, just the first few, but later in the year this swim would NOT be a choice for me. Willow trees in the summer provide a plentiful supply of shade and are a fish attractor BUT when the leaves have been shed then I avoid them like the plague…Why? Well, apart from the usual problems of dead leaves in the water (snagging the line, decaying depleting oxygen, etc) I believe that willow leaves further ‘sicken’ the water due to the fact that they contain a natural aspirin – and were used in the bygone days as a painkiller by chewing the leaves – and as this leaches out it adversely affects the fishing as the fish move away.]

Baits used were worm, maggot and prawn (Morrison’s ‘large’ cooked and peeled ones – but I usually use pieces of Aldi’s uncooked King Prawns as I find uncooked far better than cooked but none of those were at hand on the day as I forgot to pack them – I had the Morrison’s ones with me as intended feed).

I started with worm on the hook and later maggots and prawn were utilised too. I catapulted out frequent small quantities of maggots (10-20 maggots) every 10 minutes or so or whenever a fresh cast was made.

And over the course of the rest of the float fishing part of the  session – which actually lasted until around 1220 – I had around 6-7 perch in all ranging from 2oz up to the best of the day fish of 1lb 5oz… and including another 12oz’er. 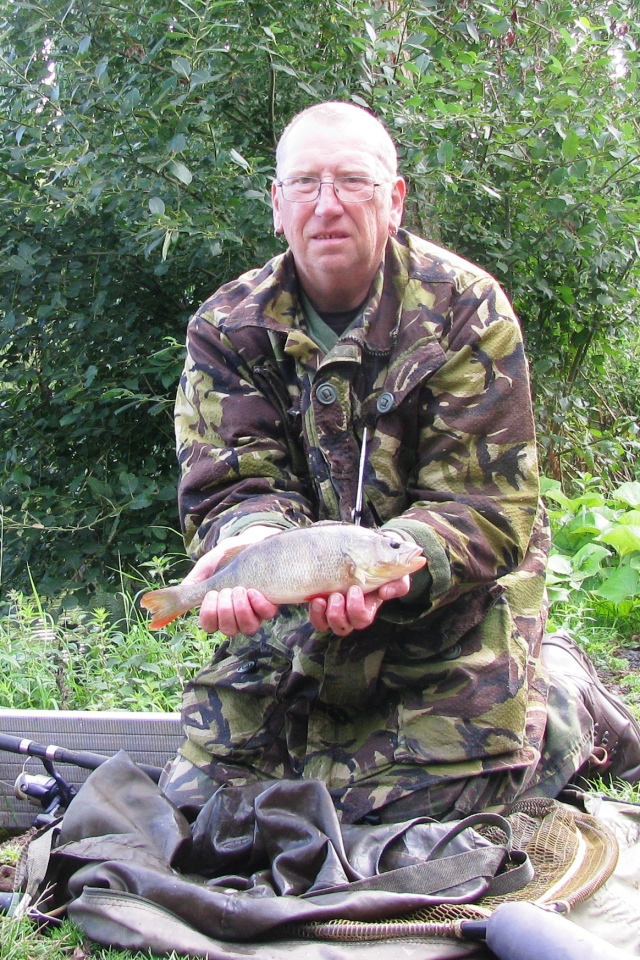 So, having delayed the switchover to the carp rods I did so at 1220 prompted a bit by the weather as the sunny skies of the morning turned to grey clouded and a few spots of rain started to fall and, as the forecast was for rain all afternoon, it seemed an opportune time to change as ledgering makes fishing under a brolly a better proposition than float fishing.

The float rod set aside I baited up the ledger rods (8lb main line and braid hooklengths, frame feeders) – worm on a size 8 hook on one rod and bread on a size 4 hook on the other and cast out ….

And discovered a problem with one of my reels! It was snatching on the wind in and backwind (important to me as I don’t use drag/slipping clutches, my spools are locked down as tight as I can possibly make them and rely on backwinding to play fish) and the anti-reverse mechanism wasn’t working… Not happy with this situation – esp with extended spells of rain forecast – I decided to pack up for the day at around 1400.

So, I need to look at the errant reel before my next outing but I have ordered a couple of cheap reels (NGT EX40, freespool, £12.95 each) in case. The NGT EX40 reels are not bad reels actually and I use a couple of them on my other rods. However, as this weekend is a Bank Holiday one, they’re not going to arrive before probably next Friday (31st) so the next couple of sessions could be float fishing unless I can resolve that faulty reel….

Next session will be Monday 27th but undetermined where/how….