Anyway, I eventually got to get back out with rod and line on Monday 30th July to a club pool (KF-WL1). As I’ve mentioned before this pool (pond) is one of a pair of waters on site and is available to fish on day ticket, the other, larger, water being reserved for member’s only.

The morning followed a day of light rain although the forecast had been for thunder and lightning but that never appeared. And the forecast for the day itself was OK … slightly cooler than the previous few weeks and the possibility of light showers – a couple of which did appear but weren’t sufficient to require the erection of a brolly although I did, in fact, set it up for the second one as it looked greyer in the distance and the (light) breeze was picking up a notch … but within 5 minutes the sun was back out…. 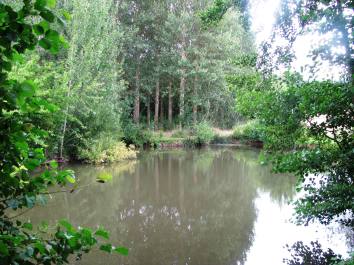 Leaving home at 0630, I arrived at the pool, around 0700, being the first to arrive – and also the last it seemed as I saw not a sole all day long, inc cars passing by on the track to the member’s pool, until when driving away at 1545 I passed a mini-saw mill in the wooded area there and saw a chap working there. 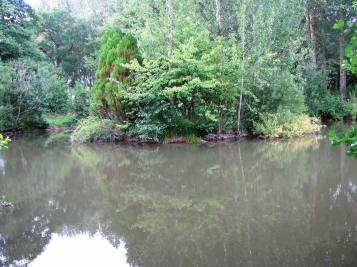 Arrived, unloaded car and took tackle down to my selected swim – all of 25 yards away – however, if I’d walked round the pool in the opposite direction, to get to the same point it would have been less than 200 yards anyway – as I say, a small pool. But it does contain some reasonably sized fish.

I’d decided to float fish for the day, fishing lift method style with a 4AAA wind/driftbeater float – well, it says 4AAA on the body but in actual fact takes 3SSG to sink the body right to it’s neck and at that point, as the stem is of non-buoyant glass fibre, a single BB is enough to take the float right down to its large sight bob. However, the undercurrent water drift needs to be considered and too light an ‘anchor’ shot can mean that it gets dragged out of position by those currents if too light … so I set up with an SSG anchor shot just above the size 12 hook’s 4” of 6lb braid hooklength with 3SSG shot about 3’ above that and the sliding float set to fish with about 12” of slack line when the anchor shot had settled – placing the rod in two rod rests with the rod tip just under the water’s surface then allowed the line to be tensioned so that the float’s sight bob was just above the water surface meaning the line is completely underwater and free from being dragged by any breeze – and a bite indicated by either the bait and bottom shot being lifted and the float rising in the water or, if the fish swam away with the bait, the float submerging completely. Main line was 6lb mono.

As usual, free feed was introduced into the fishing area first thing and then net, scales, camera, baits laid out, etc before setting up up the rod…

But not so usual was my setting out my WaterWolf underwater camera – always take either it or my FishSpy version, sometimes both but then start fishing and can’t be bothered to set it/them out. But last couple of trips I’ve done it before setting up the tackle and its not a problem then – literally takes just 2-3 minutes to get out into the water, and if I’ve spombed/spodded bait out then even quicker as the spomb/spod rod is also the camera rod so just a matter of unclipping the spomb and clipping on the camera. Anyway, as I say, I swung out the WaterWolf just off the edge of an overhanging bush to my left so that it was about 12’ out from the bank. A bit of the video can be seen on YouTube at: Underwater Video… WL1 .

[BTW … in real life, at least where I fish, I don’t usually have the crystal clear waters that others seem to have looking at other YouTube underwater videos… and most of my waters hold carp for a start and as their common nickname of ‘Puddle Pigs’ suggests they are well up for digging up the bottom mud and thus most waters with carp tend to look like chocolate soup. One pool I fish – used to be my favourite as it was carp-free – now has carp stocked and it quickly went from very clear to a chocolate colour with just a few 2-3lb stockies added. Anyway, suffice to say, in such cloudy waters even at 2’-3’ deep the recorded image is far from HD-TV quality due to (a) light from above being quickly filtered out and (b) suspended matter fogging the image even more… and the quality of the raw recorded image at times just appears to be a blank screen of various hues … often times no items can be discerned at all… and thus editing of the video image plays an HUGE part in getting any sort of meaningful end product.

For example, with the WaterWolf, the steps I take are….

Anyway, a quickie bit of info there … I’ll not go into the nuts and bolts of how to do it all but if you’re interested in looking into doing something similar then get hold of VD 1.10.4 and have a play – if you get stuck or need help then drop me a ‘Comment’ and I’ll do my best to help and guide….]

I fished 0730 to 1500 – I was intending to be there until probably 1600 but I got into one of ‘those’ terminal tackle tangles whereby the only solution is to cut the line and re-tackle afresh and it didn’t seem worth the rush … and I was looking forward to a long bath soak. So I decided to call it a day and sort out the tackle at a more leisurely pace at home…

So, nothing huge really, just a bit of fun and great to be back out there..