Sunday, July 8th and Liz and I were on the road at 0630 on a return trip to the ‘special’ waters that my club get invited annually to fish for a few weekends in return for a charity donation (see Session 25, June 18th, for our details of our first visit earlier this year).

We’ve fished there now for probably the last 6 years when we’ve had the chance – the first year we fished at the near (gate) end of the pool … succeeding sessions, including the June trip this year, we’ve fished the far (dam) end … but for this session we chose to fish a spot about halfway along that faces upon a small island.

The target, usually, for us is tench but the pool also holds carp, bream, perch, roach and rudd. However, the numbers and size of tench we’ve had over the past 2-3 years have diminished somewhat – initially when we went there we’d be catching 5 or more tench in the 2lb-3lb+ range for every carp, now we seem to be getting 10 carp to every tench and the tench are about 8oz…. So, we thought we’d give this new spot a try this time…

And we had company this session unlike the last – and the two guys fished in our old spot at the dam … and seemed to be catching although they were a bit hidden by a large tree between us.

Liz and I set up almost identically – 2 x 1.75lb TC ledger rods (actually Grandeslam Carbon Strike Avon Plus) with 8lb lines and 15 gram frame feeders which we loaded with a thick method-mix type cereal groundbait loaded with particles (hemp, wheat, maize) and dead maggots and wetted with hemp-infused oil(*) and, as I’d prepared a fresh batch of hemp a couple of days ago and kept the water used, the waters from a hemp preparation plus a bit of lake water as required…. The only difference was in our hook sizes and baits in use…

We fished until 1400 – by which time we were beaten by the blazing sunshine – the day was surely the hottest yet with the car registering 32’C inside as we left despite all the car doors and hatch back having been left open… Even the brollies didn’t help much – the ground was so hard that even getting a screw tipped spike to screw down was difficult and even then the brolly fell over after a couple of hours (mid-morning BEFORE the main afternoon heat!). And the temp at 0630 when we left the house was already 21’C. We spotted some strange white phenomena in the blue skies during the day too – I think they were amorphous alien space craft! LOL!

Its been weeks since I last saw clouds!

Back to the fishing …. Liz had first blood at 0810 … very soon after our first casts … landing a nice common carp of 5lb 7oz… followed minutes later by my 5lb 6oz one… 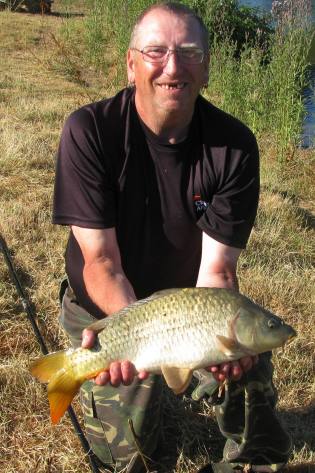 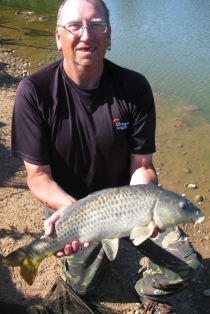 By the way – and you can see in the last three photos – that the water level is quite a bit lower than a full lake. About 18” from the bottom of the overflow pipes in the dam wall but given the current hot, and very dry, spell that doesn’t actually seem too bad. It seemed that the level dropped an inch or two whilst we were there too with a damp line showing where it was… A bit of rain forecast over the next 10 days or so here too – and ‘bit’ I think is the operative word… Local BBC forecast predicts 3 days on which we’ll be getting short and light showers and with temps dropping a degree or two (literally) on those days.

AND SO…. that’s the end of our ‘special’ angling adventures for 2018 – at least at this water – but we hope to return in June/July of 2019 given the chance again. A very nice and serene place – apart from the actual Open House Charity Day (and its Eve) as on day there’s a fun fair, competitions, stalls and a PA in operation and on the eve they’re setting and testing equipment and speakers, etc. That all takes place inside the actual walled grounds of the House but still quite noisy in the surrounding area. We’ve fished an ‘Eve’ previously and made sure we didn’t book that weekend since. The last weekend of our fishing allocation previously coincided with Open Day BUT this year I noticed that the Open Day was timed to happen a few weeks before our allocation started this year….

(*) Hemp-infused Oil
I’ve been a user of hemp oil in my groundbaits for a couple of years or so. I cannot categorically state that it makes any ACTUAL difference but I feel it does and I like the look of rippled water becoming calmer and smooth as the oil rises to the surface – hopefully lifting some of the lighter crumbs up from the bottom to create a visual attraction as per an ‘active’ groundbait. Is ‘hemp’ oil any better than say ‘sunflower ‘ oil which would provide those two elements just as well but cheaper? Well, I’d like to think so … with a slight aroma of ‘hemp’.

The ‘hemp oil’ I’ve used in the past has been sourced from Sainsbury’s at a standard price of £6 per 500ml bottle – and like a lot of ‘specialist’ targetted items – a lot cheaper than brand named ‘hemp oil’ from the angling trade which seems to range from £9-£20 per 500ml. Plus sometimes Sainsbury’s have it on offer at £4 per bottle – and then throw in Liz’s staff discount of 10% (and occasionally 15% or even 20%) and the differential becomes even more marked.

However, I’m not too sure how much the processing of the cooking version of the oil destroys the original ‘chains’ and aromas – does it lose any ‘attractiveness’ in that processing??? So, what I’ve been doing the past 12 months or more is making my own ‘hemp-infused oil’. Basically, I get a 2-3 litre bottle of vegetable oil from the local Asian supermarket and I buy hemp seed in 15Kg bags for particle feed anyway – so I take around 1 litre of the oil and add around 100-200g of ground up hemp seeds by the use of the hand grinder I bought from eBay a while back…

[I used to use a small electrical coffee grinder but I tend to want to crush 1Kg of seeds (wheat, hemp, corn, etc) at a time these days and doing it in 25-50g lots takes ages but the hopper of the manual grinder takes 300g-500g lots and quickly deals with the load – even dry maize which is hard and requires 2-3 passes, each grinding finer than the previous, takes 10-15 minutes]

… and then heat the oil and crushed seeds to around 70’C-75’C and hold at that for about 15 minutes … and then let cool and bottle (oil + crushed seeds)  into a ‘stock’ bottle when hopefully the oil from the hemp seeds has dissipated throughout the veg oil.

For use at the waterside, I take about 200-250ml of the prepped oil/seed with me to add to the groundbait mix at the waterside and generally add about half that bottle after shaking so that oil and crushed seeds are added, the rest being kept back in case I need to mix more groundbait…

Recently, I’ve learnt that the place I get my breadcrumb from – the chap makes breadcrumb commercially for the industry it would seem and he sells 20Kg bags of crumb of all colours for £10-£12 depending on colour – also sells along with pellets and other bait items his own pressed pure hemp oil. I don’t know the details re: cost, etc but its something I’ll enquire about on my next visit there.