Monday, July 2nd saw me on a club stretch of the Warwickshire Avon (KF/A/WG) for a first visit of the year in the hope of capturing a new personal best bream – as it was/is probably the best venue I have available to make that a possibility.

As per the recent norm, the weather was hot and sunny with temps getting to around 30’C at its peak – and even on arrival at around 0630 it was more than warm. Luckily, the club has recently gained permission to park in the first of the fields that we lease the water on so I was able to park literally on the waterside. The walk to the river from the original  car parking area wouldn’t have been too bad – downhill and coolest part of the day – but the return journey at 1600, in the full sun and up a quite steep climb, would have been a killer!

I set up my single rod – 12’ feeder rod with quiver tip, 8lb line, size 8 hook and a 15 gram cage feeder which was loaded with a cereal mix along with maize, hemp, dead maggots and about 150ml of hemp infused vegetable oil added before wetting to a stiff mix – and made my first cast at 0710 with worm tipped with a couple of maggots.

And discovered that my worms – and I’d checked them the day before when they had been fine – had seen better days and were limp and comatose. And the heat of the day didn’t help as despite dampening with water and keeping in the shade by the end of the day they were definitely in the afterlife and breaking up when hooking them … HOWEVER … they remained bait of the day as despite giving sweetcorn, meat and bread extended trialling I could not get even a twitch on any of them but dead worm usually elicited at least a twitch or nudge within 10-15 minutes… 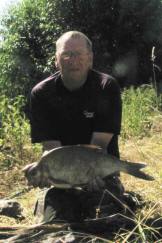 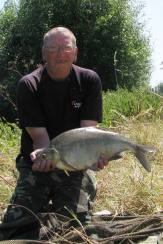 And so, the day ended, but on the the trip home such was the need for a cool and refreshing beverage that a quick stop off was made and a very welcome pint of Hobgoblin quaffed….