Friday 15th June and it was off to a club pool … AA-GH … for a bit of carpin’ and a bit of hopin’ for some bream and chub as this pool contains good fish of all those species and others…. 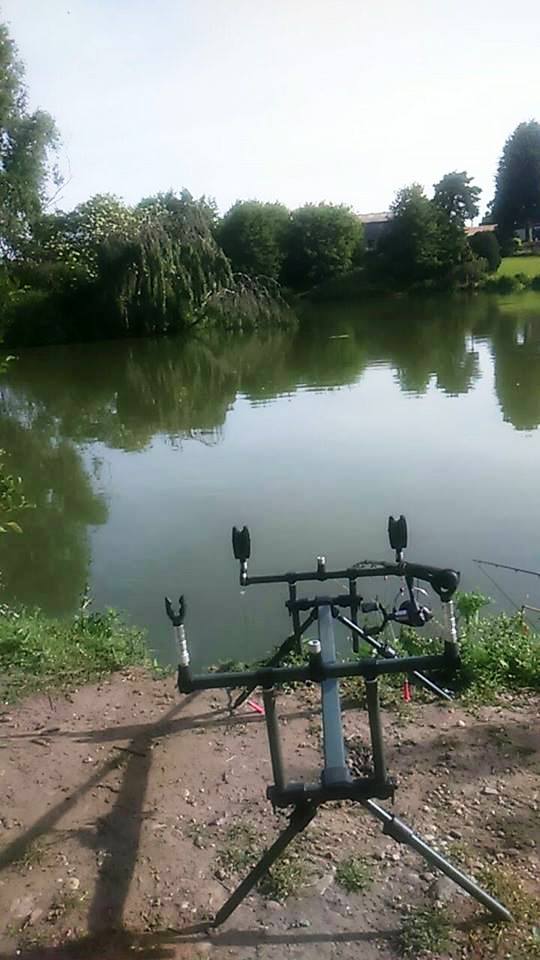 I arrived at the waterside at around 0700 and cast out my Deeper Sonar fish/depth finder – main depth in this pool is around 15’-17’ – to see if any fish were around – and it seemed that the pool was packed with them like sardines! And it appeared they were all lying at around 7’ deep and shallower even in deep water… so elected to ledger! LOL! Actually I was more ‘forced’ to by the fact that I’d left my ‘floater’ rod at home accidentally – I’d swapped it out of the quiver on a previous outing to make room for my quiver rod and had forgotten I’d done so basically… But, at the end of the day it seems that I’d not missed out as the floater freebies I threw in were ‘played with’ but I didn’t see one piece actually grabbed by the cruising carp, some well in to double figures.

So, my initial set up was two ledger rods, 8lb line, size 4 or 6 hooks, and with frame feeders loaded with groundbait and particles – but I soon ‘downgraded’ to just one rod as bites started thick and fast with the first rod having takes before I could even cast out the second and so the second rod was laid aside for a while but it was eventually toyed with again to try to double it as a makeshift ‘floater’ rod but with no joy.

Baits tried over the day – bread, prawn and sausage with bites on all but I only actually caught on the bread.

These hot summer days have always been a problem with having to keep the bait shaded to prevent sweating (eg maggots), melting (eg pastes) or plainly preventing dying in the direct heat of the sun (eg worms) and up to now its been a case of moving the different containers around into shade as the sun moved around. Not always convenient and often forgotten until on the late side…. however, a solution that worked for me yesterday – and in conjunction with the new table too although possibly on a windy it may require fixing in another way otherwise the table could get flipped in such a situation….

The solution – cost £5 off eBay (inc p&p) – one of those clip on parasols often used on baby buggies and prams, etc… 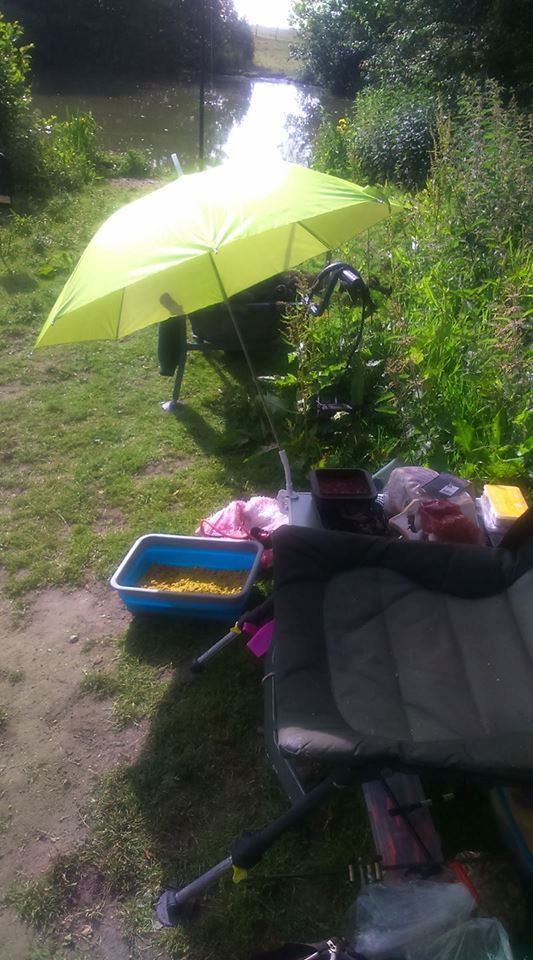 It’s very light and rolls up small and so easily fits into the quiver/holdall, it is fitted with a screw clamp for fixing to my table – or to a separate bankstick if conditions require that – and has a stiff/firm but flexible joint so it can be angled and rotated easily to the right position to block the sun’s ray with ease. Comes in a a variety of colours but as you see I chose green – and it did work well in the hot sun with my (unused of the day) maggots remaining completely unsweaty… Again, searching ‘off track’ proved a money saver – Go Outdoors sell similar items at £13 each as a ‘camping shade’….

Well, tomorrow, Sunday 17th June, its a trip with Liz to a ‘special’, unfished 48 weeks of the year pool.

Each year my club gets invited to fish the pools (there are actually two on site – one is carp, the other mixed) four weekends of the year as part of the owner’s charity event – only 6 anglers per day are allowed and each gives £10 per session donation in return for the access which goes to the owner’s local church funds. They are nice quiet secluded pools and the mixed pool (we’ve never fished the carp pool and two guys who did last year moved on to the mixed pool with us with an hour or so) contains reasonable carp, tench, perch and bream. Liz and I have taken advantage of the invite for the past 6 years now and look forwards to it.