Dedicated To The One I Love (Mamas & Papas): https://www.youtube.com/watch?v=4M7gKZqgHn4

Monday 11th June saw Liz and I head off at 0700 to one of our fishing club’s venues (KF-WLx) for the day. There are two pools on the site and we had hoped to fish the smaller of the pools (a pond really) which is also available to non-members on day ticket. It may be a small pool but it does contain a good variety of species with some specimen sized fish and can usually be relied on for a good day’s sport providing all sorts from small perch and roach/rudd up to double figure carp … and also holds ide, a silver fish not unlike a roach but with larger eyes….

However, this pool has a tendency to weed over very quickly given the right conditions – and on arrival we had a quick walk round and found that fishing it would be virtually impossible as the potamogeton crispus (aka curly-leaf pondweed) had appeared to have taken over the vast majority of the pool and only a few, possibly fishable but well apart, holes were visible …

So, we continued off down the track to the larger members-only pool for the day…

This was better but still provided far from perfect conditions as it appeared that there was plenty of weed and algae on the bottom in the form of blanketweed and potamogeton and others – and also floating patches of the same which on the breeze and with surface drag caught on the line at times …. but by no means made the fishing impossible, just needed thinking about in order to minimise the effects of….

So …. me…. I started off, and fished all day with, a lift method setup consisting of a 5BB rated driftbeater float on 6lb line and size 12 maggot baited hook. Usual pre-feeding before tackling up and setting up the ‘station’ and frequent catapulted maggots into the 2 areas I intended to fish – one area around 4-5 rod lengths out in in front and an area just off to my left about 2 rod lengths off-shore. I started off in the standard way as one would using lift-method with the line, and rod tip, just submerged under the surface which would have defeated the breeze in its own right but couldn’t withstand the weed/algae debris that was carried along by it. Solution… I fished with the rod tip some 18”-24” above the water’s surface which kept the vast majority of the line above the water and although not the optimum it solved the drifting weed problem and I fished on with no problem whatsoever … although when the breeze strengthened at times I did have to resort to the near bank swim … but I was catching consistently from both areas. Catch over the day: 21 perch with a best at 1lb 1oz and several around 10-12oz, a tench of 2lb 13oz and three small (sub-2oz) rudd… 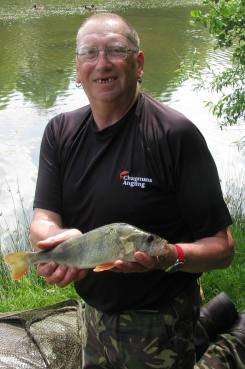 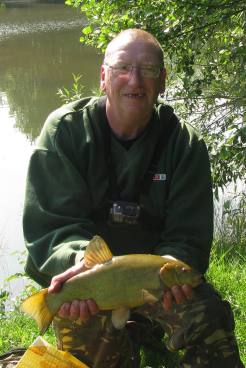 Liz…. started off with 2 feedered rods on the alarms fishing just groundbait in the feeder and sweetcorn, maggot and meat baits … had a few small nudges but nothing of note …. and so we set up her float rod with a 3BB antenna float set to fish with the bait just on the bottom, not lift-method… this switch proved productive and several fish were taken… rudd and perch …which included a new PB perch of 1lb 5oz… and a later perch of around 12oz was taken on maggot when Liz switched back to her feeders… 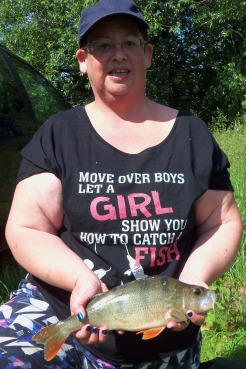 We fished on until 1600 before heading off home – via a local hostelry, of course, for well appreciated beverages and cobs after a long hot days efforts… :

My next session will be Friday 15th June … the last day of the river’s close season … so I’ll probably go carp fishing (although hoping for bream!) at a club pool. Although Saturday is the first day of the river season I’ll not be out that day as on Sunday Liz and I will be fishing a private pool that only gets fished 4 weekends of the year as the owner invites our club, in return for charity donations of £10 per session, to fish 7am-7pm on each of the allotted  Saturdays and Sundays with 6 anglers per day permitted. However, the following Tuesday, as Liz won’t be fishing, I’ll probably go to a river on that day – the Warwickshire Avon after bream or the Severn in search of barbel.

SO…. for my readers that leaves just one thing for me to say….

If you are a river angler then I wish you tight lines, big fish, blue skies, bent sticks and singing strings for the oncoming new season!