Friday, May 18th, in ANOTHER change of plans I headed out to a different pool (AA-GH) to the one had had planned to return to…. however, the ‘return’ is now planned, and WILL REMAIN as the destination, on Monday 21st.

[Well, due to ‘places to be and people to see’, ANOTHER change of plans has had to occur regarding the outing planned for Monday 21st May. Monday, Liz and I have some shopping to do, arrangements for holiday pet care to make and a couple of other things to sort too. One of those involves a visit to the local market which is only open on Mondays, Thursdays, Fridays and Saturdays – and Liz’s days off work are Sundays, Mondays and Tuesdays and thus the only matching days between the two lists are Mondays. Hence, the day for the planned trip to the pool has now changed to TUESDAY 22nd MAY but the destination remains the same]

The pool actually visited this trip holds predominantly carp but does have numbers of bream, chub, pike, roach and rudd, plus the occasional perch and I’ve heard tench too although in 5-6 years of being in the club and fishing this pool I’ve never heard of, let alone seen a tench caught. BUT a couple of years ago I remarked to Liz that I’d never seen perch on this water even when on a 3 hour underwater video I’d made which captured roach/rudd, chub, bream and pike all swimming around – and as usual when you say things like this the inevitable happens and, in that case, the next trip I had to this water I’d stood my landing net up in the water after landing a fish and at the end of the day, when I lifted it out to dry it out, lo and behold, in the bottom was a minnow sized perch! And subsequently mentioning this to someone else I was told of a 3lb’er that had been caught a few times … so it appears they are there but not in great number … and could also be true of the tench, I suppose.

So arriving at 0630 I’d planned my tactics for the day … fishing for bream … set up the float rod for lift method/laying on in 12’ of water from peg 5 … cast out to ascertain a suitable casting distance for the day … spomb out 1Kg of liquidised bread coloured ‘electric green’ loaded with hemp, wheat, maize and maggot … and then fish 2-3 maggots on a size 16 hook to 6lb main line – and the plan was carried out to the letter. 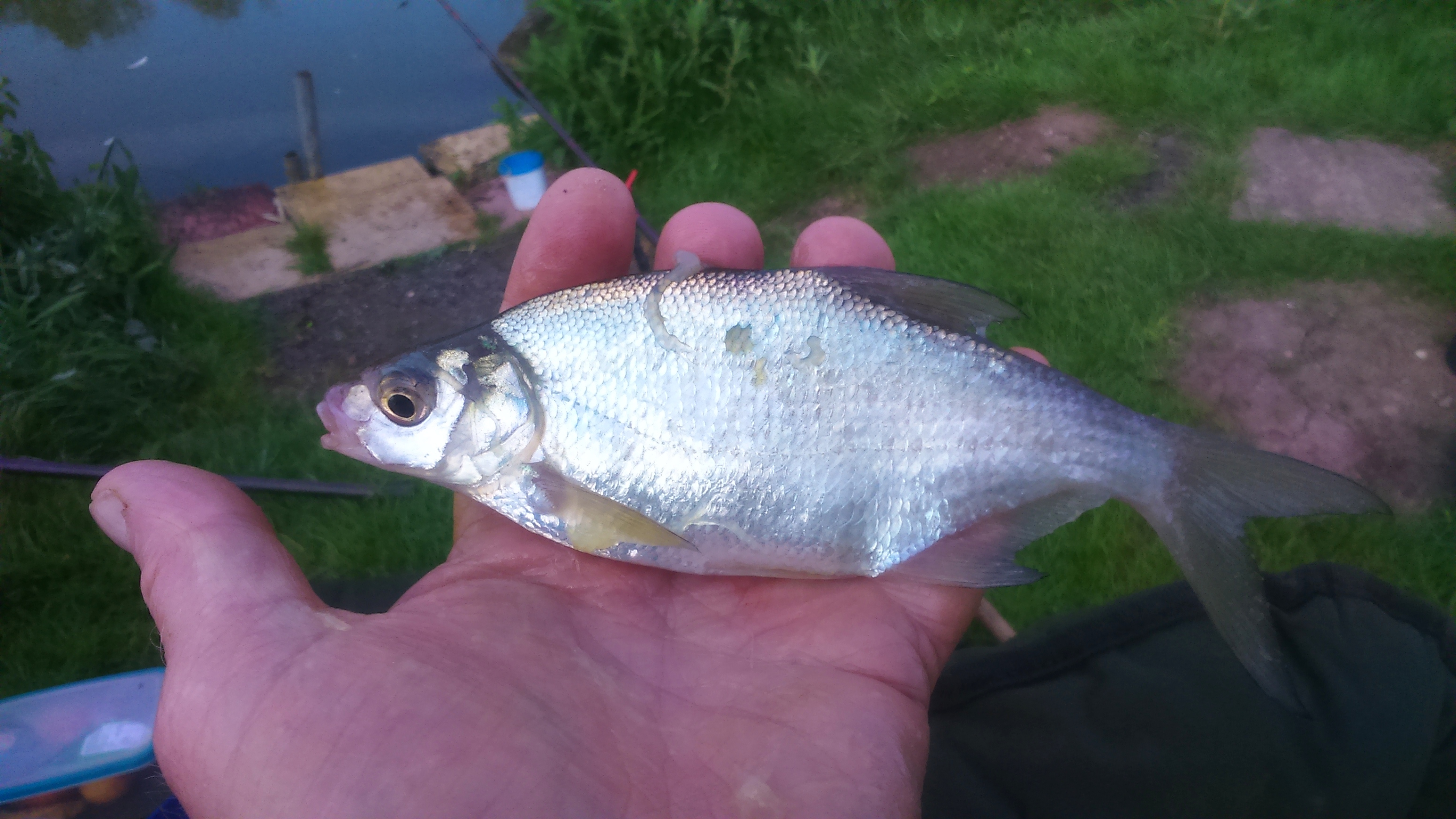 However, although I was getting lifts and dives of the float I was unable to hook anything else for a while – one of the problems of fishing a sliding float in 12’ of water, the angle of the line at the float meaning that a long strike is necessary to straighten the line from rod tip to hook in order to get enough force to the hook point to penetrate. Obviously I may have been better to have ledgered – thus removing any major angles and resulting in better contact – but I WANTED to float fish and I was quite happy with what I was doing. Eventually I did have another skimmer bream of similar size to the first.

I did make some changes over the day though – I changed hook size up to a 12, and increased bait size and type to try to lure any bigger fish that may have been around and tried bread, prawn, BS paste and meat, as well as bigger bunches of maggots and various ‘cocktail’ combinations of baits. The paste didn’t work at all – temperatures were too hot and fell off the hook on the cast!

Later in the day I had a 2lb’ish common carp – and a worse bedraggled specimen I’ve yet to see with ragged fins, missing scales and a ‘parrot mouth’… needless to say I didn’t weigh or photograph it.

A few large fish were cruising on top and I did try throwing out crust and fishing a floating bread bait but they didn’t seem to want it – at best they came and nudged and tail flapped at it – however, a guy came and fished the next peg to me fishing floaters at range with a marker float and had several good carp including a very nice mid-double common….

And in may last hour I noticed a few large tail swirls just in front of me about 3’-4’ out so I fed in some loose maggots which brought more swirls – so hoping to emulate Liz’s ‘Sherman’ (18lb 1oz carp) that she caught in similar style a few years ago I set my float with all the shotting just below the float and the depth to about 4’ (just over depth at the pool’s edge) and continued at flick in a few maggots from time to time … and I caught probably 10 small (1oz-3oz) roach before tackling down for the day.

OK – now you’re wondering what’s all this to do with the title of this posting?? Well……. besides about 6 other anglers on the water, there were also 5 fishers … a kingfisher, a heron and 3 common terns (I thought originally there was 1 tern having a good day but later saw 3 of them so possibly….) And those fishers were doing reasonably well – I saw the heron with one fish, the kingfisher managed to get two, but the tern(s) had 5… I tried to photo the terns but IMPOSSIBLE!! So far that I needed the camera at its full 40x to get a decent sized pic – as I did the kingfisher but the kingfisher was sitting and the terns were tearing around at a rate of knots LOL so impossible to get in the screen long enough to fire the shutter! 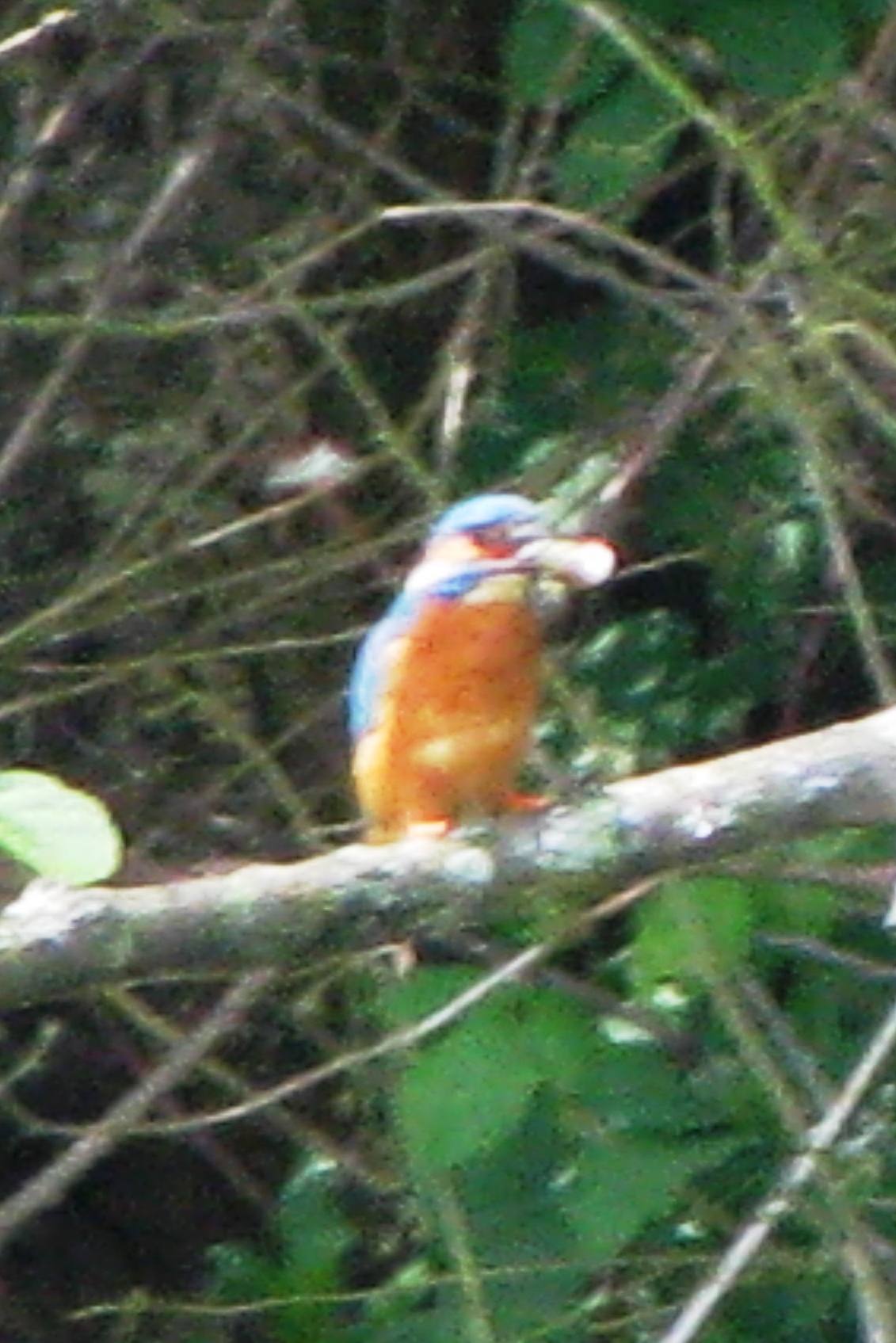