After sorting out my swim, baiting up and setting up my ‘station’ to my satisfaction I was fishing at 0800 with 2 rods out, both ledgered, 8lb line with 1/2oz leads but with one bread baited on a size 4 hook over a spomb baited area in open water (I’d replaced the broken reel on the spomb rod the previous evening) and the other with a size 14 hook baited with worm fished under a willow tree to my left which had been maggot fed (and extra added over the day).

I also catapulted out over the day a number of floating freebies to see if I could get interest in those over the day – and again the dog biscuits were taken – mostly by the Canada Geese, though – whilst not even the geese or ducks showed even the slightest interest in marshmallows – so I think the ‘marshies’ will no longer find a place in my bait bag! The few dog biscuits taken by fish were such few in number and over such a large area so as to make fishing floaters not really worthwhile and so I just stuck to the two ledger rods all day long….

Only had one piece of action on the bread rod when I had a good long slow take – but when struck it was discovered a diving coot had been enticed by my bait or had caught the line underwater as it had a foot entangled in my line. And it was quite a calm little fellow – just sat there without a flinch while I wound it in backwards but didn’t like the net – netted it three times but each time it managed to jump back out, and the third time the line freed itself and the coot just leisurely swam off up the pool as if nothing had happened and then 15 minutes swam back down. SO different to a moorhen I also ‘caught’ several years ago when that took a bait off the bottom … fought like billy-ho, 95% of it in the air while screaming obscenities (I assume it wasn’t just saying ‘Way-hay’ and singing), battled hard whilst I and another struggled to free it from the line … and then, when released, flew at the rates of knots to the far of the pool screaming continuously and continued to complain, loudly, for the next hour or more!

The worm rod saw a little more action – with 4 perch, best 11oz, with others of 10oz, 7oz and a couple of ounces captured. And a snapped handle on the reel when I stepped on it – second reel broken in two days! Luckily, it was a reel with a double paddled handle (Okuma CBF-340) so it was still perfectly usable as only one half of the handle was snapped off – and, as I had a couple of spare twin-paddled handles at home, it was replaced overnight and back in full action again. 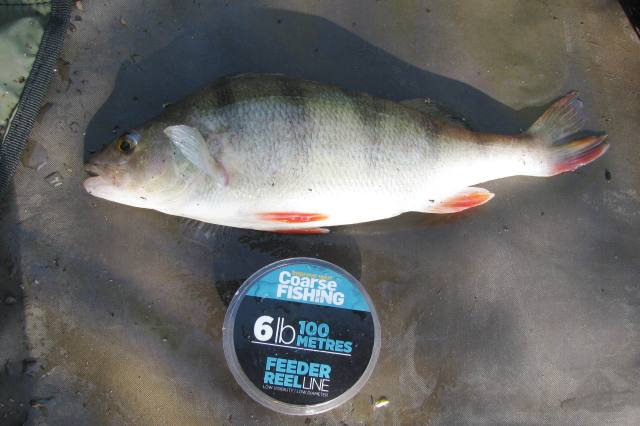 So, although it may seem a poor day – 4 small perch – to me it was a red letter day…. The pool in question is a ‘hard’ water… as although there are millions of fish – and large carp (its the club’s ‘premiere’ carp lake) it is naturally a ‘food rich’ water with myriads of daphnia and other small food items in great abundance. Basically a fish just needs to open its mouth and it intakes enough food for a week type of thing …  and what is needed is for anglers’ baits to become a part of their diet by weaning them over to it BUT … Catch 22 … as its so hard to catch there then hardly any anglers, other than carpers and large boilies are not going to wean roach, perch, etc – visit and hence suitable baits like maggots, small pellets, bread, etc are not being fed in sufficient quantity – people don’t catch because people don’t go, people don’t go as they don’t catch basically. Usually, I think of the water as 1 bite per 5 trips on average – and as most bites are from carp then more like 1 non-carp bite per 10 trips. So 4 non-carp in one session is basically like winning the lottery to me especially as anything non-carp is all the better to me!