Friday 26th January and with the weather remaining on the ‘warmer’ (albeit still not ‘warm’) side of things albeit wet at times too I headed back out to the waterside. However, my planned canal zander hunting trip had to be changed … Friday’s I need to pick Liz up from work in the evening – which would have meant battling through Friday afternoon traffic on the M6 to get back home in time to unload the car, sort out tackle/bait, bath/shower, prep tea ready for Liz, etc – so not a good idea I thought. So that trip put off for a while until probably a Monday/Tuesday when there’s no rush to get home…

So, I arrived at the pool at around 0800 … and amazed to see another car already there … I’m usually first by a long chalk … and then to add to my frustration the guy was setting up in the peg I’d intended to fish! A whole pool to choose from and it had to be mine. Think he was carp fishing though – he kept sending a bait boat out to the edge of the island in front of him anyway…. and the pool ended up quite busy by the end of my day with around 10 or so fishing  which is more than usual … quite often I’m there on my own all day.

With my first choice swim taken I decided to fish in a position actually between two pegs so that I could cast towards the near end of the island in the deeper water and the first thing I did was to get out my Deeper Sonar to check the contours of that area as its not an area I fish often and when I do its usually with a lure…. and I found that the best depth was around 15’ …. and there were a lot of bait fish hovering mid-water…

So, having determined where to place my baits I then spombed out some rubby-dubby in the form of breadcrumb into which was added fish oils and maggots plus an amount of chopped up fish – generally old baits.

I then tackled up my 2 pike ledger rods – both home-built in the 80’s – North Western blanks,11’, 2.75lb TC, no handles as such and the sliding Fufi reel fittings are fitted directly to the blank over a wrapping of insulation tape to protect/cushion the blank and held on with more wrappings of insulation tape … in fact, until recently, the rod rings were also attached with insulation tape but now they’re properly whipped on. Rods were then fitted with 5000 size reels loaded with 40lb braid and 30lb wire traces (with 2 x size 2 double hooks) and free running 3oz ledger leads.

Baits were two halves of a needlefish – tail end on one rod and the head end on the other – and balsa wood sticks added to both with the intention of popping up the baits, one at 2’ and the other at 3’. As I say, popping up was ‘intended’ as I discovered later that the belly of the tail end had burst open and the stick popped out and the head end was too heavy for the stick and sunk anyway.

These were cast out and left for around three hours with occasional tweaks of a yard or so to try to attract attention to no effect …. and then re-cast to a slightly different area for another 3 hours, again with no joy.

Meanwhile, I put out my WaterWolf underwater camera for a few hours but not yet looked at the results closely…. 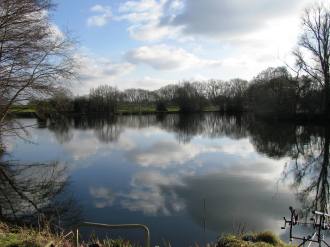 The ‘donkey dick’ rod has the WaterWolf attached.

Anyway, it was a nice day with blue skies, sunshine and little breeze for the main part although far from sunbathing temperatures…..

So, as it came up to 1415, having had no action at all, I decided to pack away the bait rods and have a few casts around my immediate area with my lure rod. Normally I’d have wandered around a bit but there were more people there than usual which limited the options of casting areas… and I know the bit of bank where I was can produce as I had my current PB pike (20-12) there along with several others since. So, with most of my gear packed down, I set up the lure rod with a slim blue/gold/silver, slightly banana shaped, sinking plug and about 6-7 casts later I set the hooks into a 4-04 pike…. It was landed and weighed and then, inside the weigh sling, slipped into the water whilst I set up my camera on a bankstick ready to take a self-timed photo. Camera setup, I lifted the weigh sling from the water and placed on to an area of flattened/decaying rushes that I’d focussed the camera on … went to camera and pressed the shutter button to start the 5-shot sequence I use for self timers … but as I got back to the fish, it flipped itself out of the sling and straight back to the water … and I ended with 5 pictures of my knees and none of the fish…

So at that point I reckoned it was time to go … and I went ….

If I fish next week it will be a single session on the Tuesday as on my usual days (Monday and Friday) I have places to be and people to see … specifically, Monday 29th, I’ve an appointment to have a tyre changed as the current one gets pumped up to its required 44psi but within a week its dropped to <20psi so has a slow puncture…. and Friday 2nd I need to bid place internet bids for a book I’m after and there are two copies in two separate lots coming up that day…. Anyway, if I go on Tuesday, I’ve still to decide on the what, how and where….