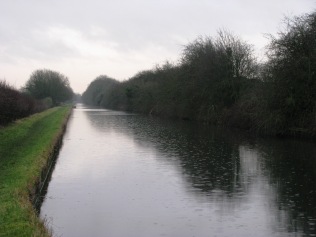 Looking down to the usual start of the stretch

The end of the stretch

… and on this session I elected to fish at the bottom end of the club’s 1.2 mile which I’ve only managed to reach before on one occasion – and that was probably 5 years or more ago. As I say, it’s 1.2 miles from the usual parking for our stretch and when out roving with lures and wobbled deadbaits it takes about 4 hours to reach this end and then 3 hours to get back (as you tend to be more selective of casting areas on the way back) … and thus it would take 6-8 hours fishing if I’d started at the usual end and fished up … and I’d only 3-4 hours maximum to spare as Liz needed the car later for work. So, in this situation I’d used Google Earth to locate some parking at the far end before setting out (well, a few days ago in actual fact), and then put the co-ords into the Sat Nav and … bingo, arrived without problem. The parking was at an entrance to the canal in a place where another club holds the fishing rights but it was only a 250 yard walk down  the canal to reach our area… far better than the walk from the other end as it left me time for 3 hours of fishing although I probably only fished for 2 of them.

Anyway, as can be gathered from the title, I intended a lure and wobbling session for pike, and set up 2 rods for this. Both rods had 30lb braid terminated with wire spinning traces – and one rod was initially fitted with a black’n’luminous rubber shad and jig head and the other with a Shakespeare Midi S plug…

… and I fished these for about an hour without any joy … and then swapped the shad for a black’n’red caterpillar type body on the same jig head …. and fished down the canal another half hour before deciding to stop for a cuppa … and before having a sup I set up a sprat on a wobble rig but at that time added a couple of swan shot up the trace and cast the sprat to the far bank as a static ledgered bait whilst I had that cup of coffee…. 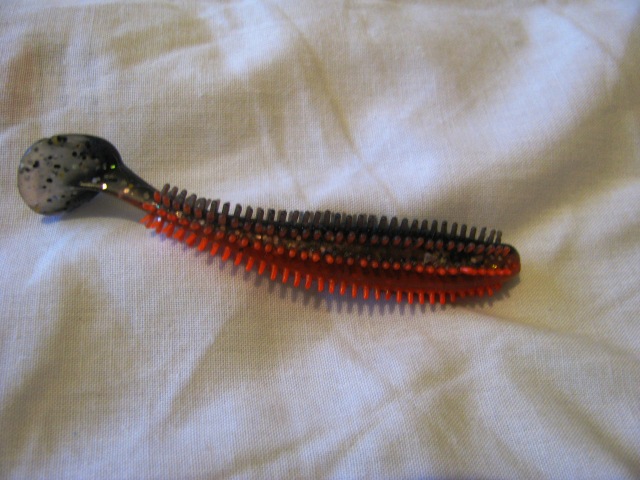 Anyway, whilst having that coffee the skies had re-darkened and the wind picked up slightly – and in the distance, down the canal, I could see a canal boat working it’s way up towards me – and with a lot of decaying leaves still on the bottom of the canal the passage of that boat would create problems with those leaves being churned up and then entangling on the line and on the lures….  so I decided to work my way back to the car and possibly stop off at a pool that was almost en-route home for an hour or so… but whilst driving back the rain increased and I decided to call it a day.

Well, the club has put a call out for members to attend one of our waters on Sunday 7th to have a clear up of stray loose and lost lines after a complaint has been made by the landowner. The water is on an equestrian centre and so loose line not only creates danger for the wildlife but also for the horses and dogs….. so I’ll be doing my duty there…,

Friday 12th – possibly a day with Liz. I’m not sure if she’ll come out but even if she does it will be her choice of venue as she doesn’t get out too often. I’m easier on being retired but one of the cons of having a 25 year age difference is that she’s still working. And her free time has to be shared with other activities too… so when she gets to actually get out fishing the choice of when/where/how is basically hers.