Friday, 18th August, and I was back at the scene of the previous mission (AA-GH) after the originally planned visit to the River Severn was changed due to seemingly bad conditions due – but looking at the club’s website it seems that people were there and had good results! But not to worry – had a good day anyway…

I arrived at the pool at a little after 0600 – first there and had to unpadlock the gate to get down to the pool but that’s good as it means I get my selection of swim, or, in this case, as I’d a score to settle with a fish there, my wanted swim of Peg 5. 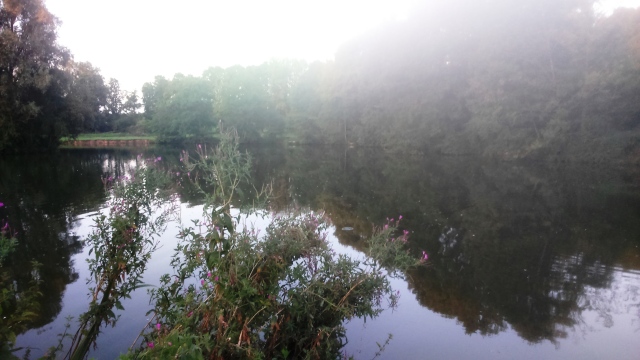 So, did the usual arrival procedure of baiting up, laying out kit, etc which included this time flicking out a few dog biscuit and crust floaters into the margins at my feet along with a few maggots – and floaters and maggots were then kept regularly going in. This was in order to attempt to lure back that mirror carp that I lost on the last session and perhaps a few of its relatives… I also baited out into the water with the usual cereal groundbait mix along with particles..

The intention for the day was to start feeding the floaters to get the carp feeding on them but not actually start fishing for them until later and whilst doing that I’d do my normal 2-rod ledgering further out.

So, the first rod set up was my ‘floater’ rod – a 70’s Winfield 1.75lb TC ‘Specialist Angler’ rod set up with 12lb mono main line connected via a small quick link to a 3’ hooklength of 15lb braid terminated with a size 2 Kamasan B981 barbless hook. And I tried out one of the things I mentioned in my last posting – the first of the ‘cheesey’ successes of the title – BabyBel wax used to float the weight of the quicklink to prevent its weight pulling the line down under the water – and I also pulled the braid itself through a piece of the wax to give it a slight coating to ensure its flotation – and it worked brilliantly!!

Then the usual two ledger rods were tackled up and baited with BabyBel cheese on one and meat (later changed to worm after a long period of inactivity). And that cheese was ’cheesey’ success number two… really soft and mouldable but stayed on the hook really well, seemed to withstand the attentions of the small ‘nibbly’ fish, and it seemed the carp liked it too… I’ll have to try it as a bait on that pool I’m having trouble anything other than small perch on!

The day was a strange mix weather-wise – one minute you could be sitting in bright sunshine and the next in a raging deluge – and the demarcation lines in the skies were very sharp, like lines drawn/etched, around the areas of (sometimes midnight like) black sky and the light blue with white fluffy cloud ones… and this gave rise to the daylight looking very fluorescent/electric at times… quite weird!

Anyway, first casts with the ledger rods were made at just after 0700 … but around 0900 I pulled those rods quietly in as the mirror (or its sibling) was taking the floaters being fed in. The floater rod was baited with a piece of crust and quietly dropped in to the margins and shortly after it was taken, I struck into firm resistance – and few seconds the mainline parted… ARRGGGHHH! Must have been a flaw in the line or it got dragged over a rock as I’d certainly not got enough pressure applied at that time to comprise even 6lb line never mind 12lb as I was allowing the fish its head on its first run… Perhaps the line had been flawed on a previous outing but certainly checking the line afterwards showed nothing untoward. Oh well, before I use that line again.. But then the situation also immediately threw up another problem … I’d not got any 15lb braid to make up another hook length, only 8lb which would not have been suitable in my view and the best I’d got was 11lb mono (in hindsight, as I write this, I should have just put a hook on the mainline and fished straight through!! It’s the age, I tell you!!) but it was not good and had a ‘memory’ from sitting on the storage cotton spool and was extremely curly. I did try, in a lengthy period before that rod was needed again, standing the rod up and dangling two 1oz leads off the hook but that only made the very slightest difference. And to cut the story short, although other carp came along and took floaters over the rest of the day, the curly line ensured that not another took the bait.

I also had issues with the ledger rods … as I’ve said many times, and for the reasons stated in previous posts, I almost always (99.99%) use short (usually braid) hook lengths for ledger fishing and these I previously attach to the main line via light weight quick links… 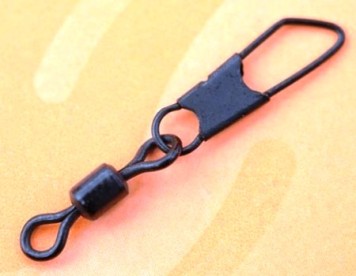 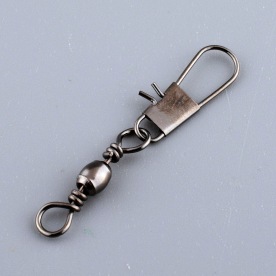 … but in both kinds the crimping on the non-fastening side of the sleeve could work loose and the link fail … also in both kinds the bends of the sleeve that held the sprung wire could start to open up and fail … in the first one, as there is no turnover on the wires where they clip a pull can bend the wire and pull them out of the clipping … and although the second version prevents this the bend overs can catch the line and tangle… and so I only use these for connecting my leads now as a ‘weak point’ can be advantageous to a degree…

… then I started using these kinds… 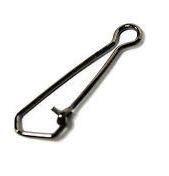 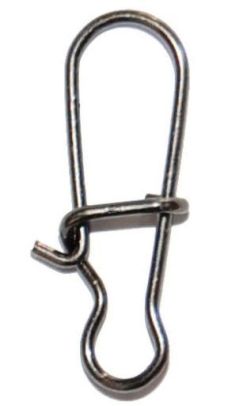 ..which are structurally stronger – 1 piece of wire thus no connections to fail as per the ‘safety pin’ type – but I did find a problem with line catching in the ‘eye’ that the hook of the spring wire catches into on the first type and the end fixing wrap of the second type …  and also line could also catch on the loose end of the wires although somewhat protected by lying inside the shape of the first one…

… so this outing I used another two types… 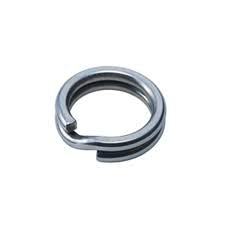 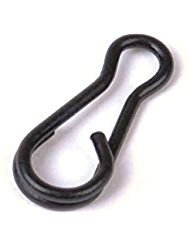 .. again, 1 piece construction so structurally sound. However, the first one, a standard stainless steel split ring fails completely to be of any use for two reasons – and disastrously so for one of them. First problem is actually fitting the loop of the hooklength on to it in the first place – I used small (3mm) rings and it was difficult to do without the use of a pair of split ring pliers (ie more stuff to carry). Second problem – and this happened twice, once on each rod – the line gets cut very easily by those 2 ends of the ring especially as due to shape the line can rotate around and catch on the ends at the split. Evidenced by the line loop on both occasions being cut on the opposite side to the knot. However, the second version seems far better and I changed to these after the problems with the first type – easy to slip on the loop, shape stops any rotation and thus SHOULD remain at the bottom of the loop although its possible that when lying on the bottom and the line is thus slackened that it could lie above the end that lies parallel with the body and thus get cut as per version one? Maybe add a slip of rubber tube over the bottom end to prevent this .. or locate clips with both ends facing inwards? And as this type is far smaller than sprung wire type Then the likelihood of line catching the wire tags is less too I should have thought … and never had it happen at all on this session.

Tackle issues sorted … what of the fishing?

Well, first fish of the day – on the bank – was a 4lb 6oz leather carp taken at about 1045 taken on the BabyBel cheese… 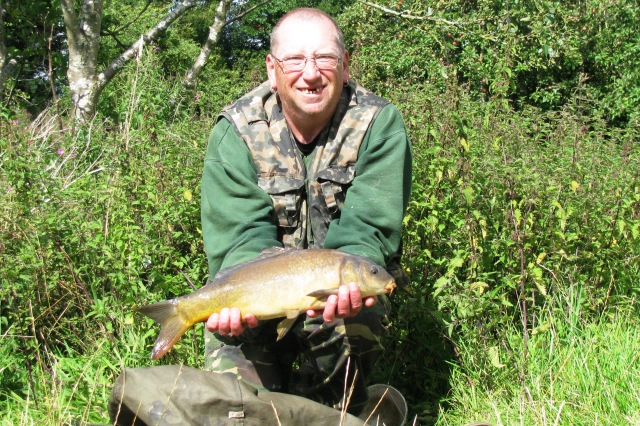 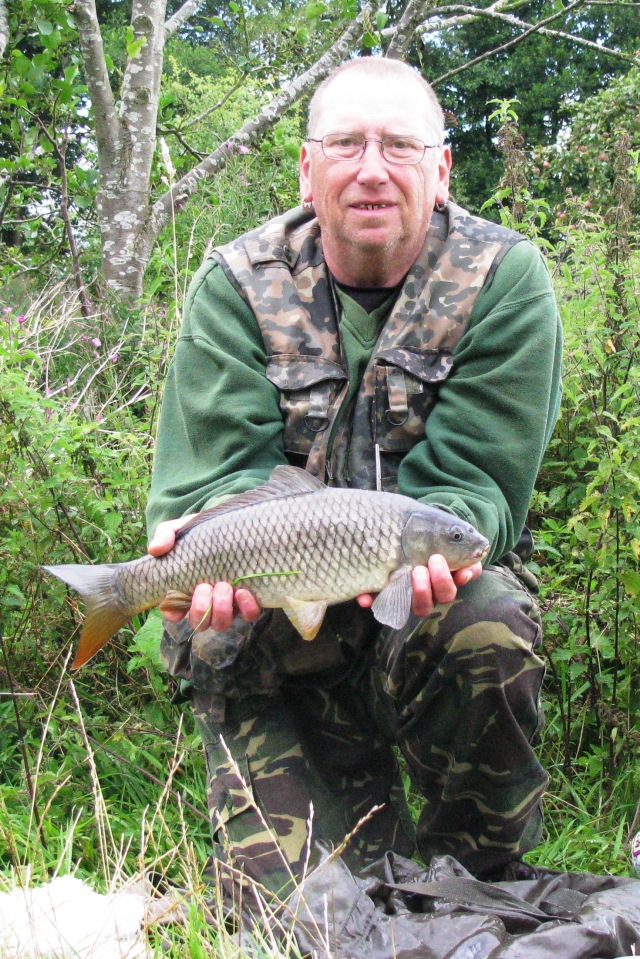 … and these were followed by a 3lb 10oz common carp (cheese),  two 3lb 0oz common carp (both on cheese)… and that ended my catching as at this time a number of floater feeding carp appeared in the margins and I spent my time unsuccessfully, due to the ‘floater tackle setup’ problem noted earlier, trying to entice one or more of those for the rest of the session.

Whilst I was there another angler of my acquaintance turned up and headed off to fish a bit further round the pool to Peg 1… and came back down to me a short while later … it seems he’d caught a roach of around 6oz and has it let it go into the water it was immediately snatched by a pike, so he’d taken his lure tackle out and had an immediate take of a 10lb+ pike – but he’d left his camera at home and so I headed off round to his swim to do the honours… 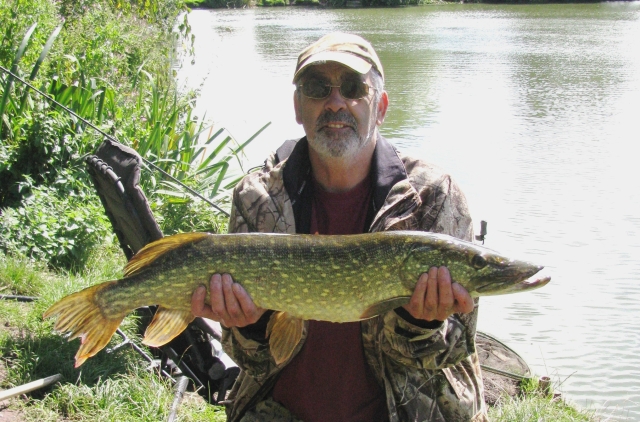 Also there was another chap fishing at Peg 2 who had, reportedly, had a few double figure carp fishing on a float with maggot directly at his feet … and this was the swim that Liz caught ‘Sherman’, her 18lb 1oz PB carp from, also literally within 12” of the bank, back in 2011.

Over the day there were 4 of us on the pool, or so I thought, but I know that two left just before myself and one guy I could see still on the far bank but on the car park there were two cars besides mine … so there must have been someone slipped in unnoticed and was fishing in the trees along the side bank or on the bank but hidden from my view by the island… so, maybe there were 5 of us.

OK … and that’s the end of my UK fishing until the latter half of September at least now. We’re going away for a couple of weeks soon and need time to sort out house jobs, etc before heading off… but not the end of fishing for that period per se…. as we’re heading to Cyprus where Liz’s parents now reside and where we’re hoping to do some fishing for catfish (not like our catfish I’m told, these are toothy buggers!), freshwater bass and, I assume as Cyprus held the Carp Championships back in the 90’s, possibly carp…. and go on a three hour tuna fishing trip – which is run by two guys from Coventry LOL!

SO… blogging over the next few weeks, due to having to write it on the onscreen keyboards of a mobile phone, or at best a 7” Android tablet, when away will be either of a shortened diary entry type and then updated on return – or even possibly not be published until our return….

So, toodle pip and tight lines for you long term sufferers of my ramblings in the meantime!

2 comments on “Session 45 – A Few Carp Landed, A Few Carp Lost, A Bad End Tackle Idea, And Cheesey Successes… And Last UK Fishing Trip For A While Now”