Tuesday, 30th May, I paid a return visit to one of my clubs’ mixed species pool (AA – B) – albeit no carp or pike in there – but it does hold, tench, perch, barbel, chub, roach, rudd, crucian carp among other species – and a carp (& chub) only pool resides 10 just yards away for purveyor’s of that species. 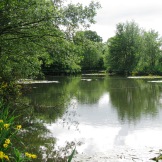 The Pool – The Item In The Middle Of The Pool In 2nd Picture Is A Solar Powered Automatic Pellet Feeder And Aerator Unit – Keeps The Water Oxygenated In Hot Weather And Fish Fed In The Cooler Months When Less Bait Is Being Fed In.

A nice day, relatively calm with alternating periods of sunshine and bright overcast spells, I made first cast at around 0715 with my float tackle – using lift-method with a 3AAA wind-beater float, 6lb line, size 12 hook (changed for a short period to a size 16), baited mainly with worm, maggot and worm/maggot cocktail but also tried tomato flavoured chick pea and meat for short periods.

No other species at all – not a touch on meat although I had a few nudges on chickpea before that went quiet – so none of the expected tench, bream or barbel – but a pleasant day overall really.

And the carp pool had been suffering a leak and the level had dropped quite a bit on my last visit to the site but it seems that the curative works planned have taken place – well, the water level has improved and the area of banking from which the leak was occurring has been coated in fresh clay and a few new reeds planted… hopefully the problem is now resolved!

Right … next trip …. another club water I’ve not fished for a while although I did visit a while ago but was forced by events to return home before I even managed to get the rods set up. Probably the hardest water I fish – although there may be another contender for that title that another of my clubs has the rights on, a 100 acre reservoir, but which I’ve not yet visited at all… So that’s planned for Friday 2nd June…