Tuesday 1st November 2016 – I had recently received a special invite to fish a small Staffordshire estate pool (WBP) and so at 0630, as I didn’t know what to expect, I set off with two ledger rods, a float rod, a 10-35g lure rod and a 30-80g lure rod, the latter of which is used as a multi-purpose tool – besides its normal lure use it also becomes the ‘launcher’ for my fish/depth finder’s transponder, for my spods/spombs, and for my Water Wolf and FishSpy underwater cameras among other things.

On arrival at around 0730 I found two others already fishing and enquiries elicited that the pool was around 4’ deep, which seemed in keeping with my findings when actually fishing, that the pool was heaving with small 3-4oz fish catchable by float fishing and that good sized (20lb+) carp had been taken from there too.

Anyway, I decided to fish with the two ledger rods for the day using frame feeders using paste on a size 6 hook to 8lb line and worm/maggot on a size 12 to 8lb line on the other. Before tackling up, the ‘station’ and equipment were set up ready and several cricket ball sized groundbait balls were thrown out into the swim – the frame feeders were loaded with the same groundbait too – breadcrumb + other cereals + additives + maggot – and sweetcorn and small meat cubes were also free fed.

First casts were made at around 0815…

On arrival the sky was bright overcast, water temp was 10.4C (constant all day) and the air calm and all was good albeit biteless but at around 1100 a slight breeze picked up which, although it didn’t ruffle the water even as the pool was surrounded by trees, it did blow off leaves from those trees – and loads of them and most seemed to gather on the nearside of the pool making fishing difficult due to they catching on the line, and having to cast over them and try to get the line sunk below… The other two chaps had life a bit easier in that they were using bait boats to drop their feed and bait to the far side of the pool – and as the boats passed through the leaves they created a leaf free channel through which the line could sink before the leaves re-gathered.

Anyway, I fished until around 1500 but other than a few nudges, line twitches and chewed up worms on retrieval of the lines I had nothing at all. The two guys both had a few carp each but did say the fishing was slow that day. 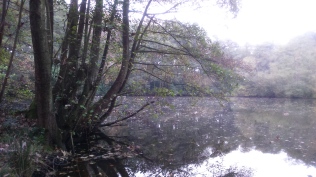 I tried to get my FishSpy camera out and filming – the water itself was clear and as shallow I thought I might get some good footage … however, problems! I could not get it to connect via WiFi to my mobile – the red ‘flashing light’ that it was supposed to display was in fact showing a steady light. When I got home I checked the FAQs on the FishSpy website but could find nothing relevant or even mention of the light being in a steady state so I started to write an e-mail to them when I had a thought… after last use and downloading the stored video on to my PC I had re-formatted the inbuilt ‘hard drive’ – and used NTFS format instead of the FAT32 it had been in… so I re-formatted again but in FAT32 format… walla! Working perfectly! Anyway, sent the e-mail too FishSpy anyway with an added update to indicate the possible NTFS ‘bug’(?) and that they may want to include the info not to use NTFS in their online FAQ. BUT things can also work to your advantage – whilst on the FS site I found a recent firmware upgrade which switches the camera to store black’n’white footage rather than the usual colour format – filming in b’n’w supposedly helps definition in very low light levels – and I’m now looking forward to trying out this new mode of operation.