Friday 16th September and again its a trip to the carp and bream pool (GH) … I had intended to go to a non-carp pool after tench and perch (and barbel, chub, crucians, etc, etc) but with the recent wet weather and the 3/4 mile trip down a deep potholed dusty/muddy farm track to the water and given the fact I’d just put the car through a car wash I didn’t fancy getting it dirty again so soon! LOL!

Anyway, I arrived at the venue at 0700 – unsurprisingly the first to arrive as usual – although unusually the next arrival wasn’t after midday… maybe the forecast of rain with lightning, etc in the morning put people off but although there was a short spell of rain there was no flashing or banging and I didn’t use the brolly even and with it being a warm day the little dampness I’d acquired soon dried out.

My current usual tactics for this water were employed again – floatfishing with sliding float (water depth 12′ at one rod length out) with maggot, worm and butterscotch flavoured paste, and floating baits (mainly bread) for cruising carp. 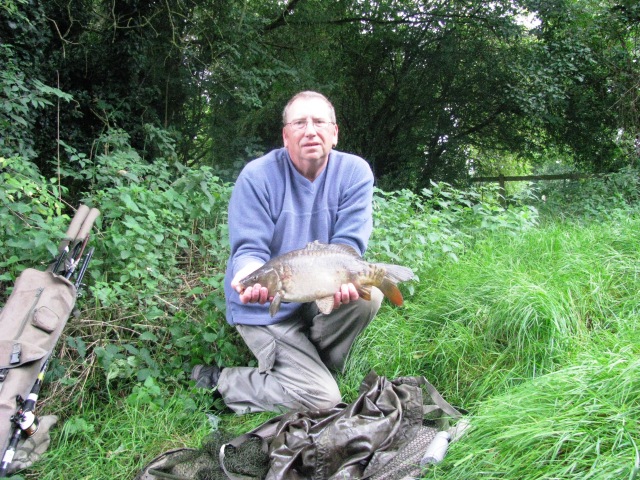 … and shortly followed by, after a couple of missed bites, a 1lb 3oz bream again to floatfished worm… 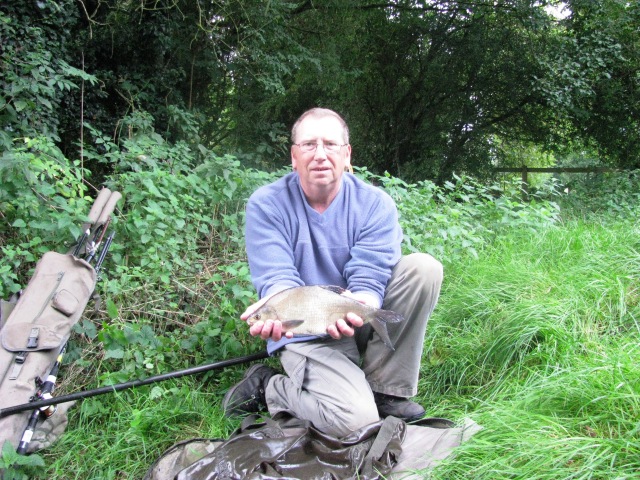 … a smaller, 8oz, bream followed and then again on worm, I hooked into my biggest fish of the day, a decent, possible double figure, common carp – however, despite managing to extricate it three times from submerged bankside roots on the fourth visit into there it managed to wrap me up and I could only pull for a break 😦  At this point I switched to a butterscotch flavoured paste as bait which saw a 12oz bream, a 4oz bream and a common carp of 4lb 7oz arrive on the bank. Then all went a bit quiet on the bottom baits but a few carp were swirling in the area so I put away the float rod and cast out a crust on the floater rod…. and quickly hooked into what was to be my best (landed) fish of day, a mirror carp of 5lb 12oz…

… however, that was the only surface fish to be fooled over the next hour or so and so I switched back to the float rod for the rest of the session catching common carp of 2lb 14oz and 3lb 4oz and a small bream of around 4oz, all on butterscotch paste – and a change back to worm brought several roach of up to 8oz, a small rudd, 3 bream of around the 12oz-1lb mark and another common carp of 2lb 3oz.

Over the next couple of weeks we have Liz’s parents visiting us from Cyprus so there are fishing days planned for the next two Fridays – the first, I think, will be a return to this pool with Liz’s Dad as the pool I’d intended us to fish (and which we fished last year) is not fishing very well I was told and there are problems there – and on this pool you’re almost guaranteed to catch decent fish anyway… and the following Friday, which may also include Liz and her Mum fishing, will be a visit to one of our other club’s pools… Well, weather permitting and all that!! 🙂