Well, Tuesday May 31st I set off extra early to fish one of my club’s pools and arrived at around 0700 to find the gate on our entrance to the site locked with a non-club padlock… Another member had found the same on Sunday – and it seemed then that the gate was only opened at 0930. Sooo… I wasn’t going to hang around for two hours or more and so I had to switch plans and head elsewhere…. As it happens I’ve since found out that we are allowed to use the main entrance to the site rather than our usual ‘tradesmens’ entrance in the case of our entrance being closed but hey-ho!! 🙂

Anyway, my first thought was to head to another of the club’s pools – probably 5 miles or more away – but as driving there I remembered I’d bought a BAA (Birmingham AA) card for the first time in a few years as I want to fish a section of the local River Stour later in the year and they hold a stretch of that – and the BAA had some pools close to where I was that I had put on my agenda to visit again anyway. And so it was off to Nordley Pools for the day.

Anyway, I headed to pool No. 1 – a pool I’ve had some reasonable bream from in years past…. and all the pools in general contain a good mixed range of species too. 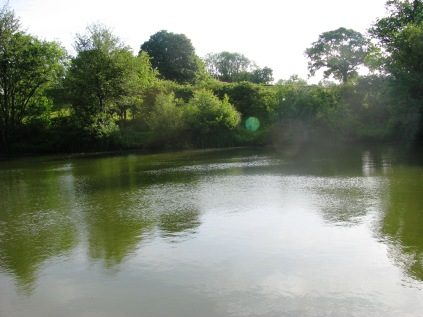 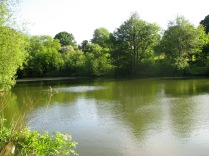 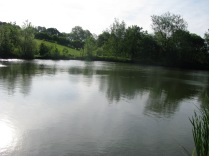 I set up two ledger rods, both with 8lb main line and using frame feeders. One was equipped with a size 6 hook baited with bread (and battered chip experimentally for a time), the other a size 14 baited with worm and maggot.

So I fished then from around 0745 until 1530 casting the bread/chip rod to my front around midway into the pool, and the maggot rod to my left around 4-5 rod lengths out.

I had plenty of takes on the worm/maggot rod – virtually a tug every cast but seemingly from small’ish fish as most resulted in nothing being hooked – but the bread/chip rod didn’t see much action at all with only one take in the entire day BUT that did produce the biggest fish of the day being landed – a 4lb 10oz common carp. 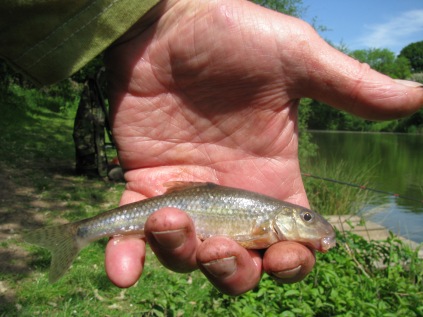 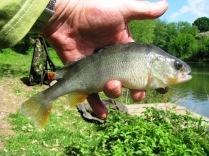 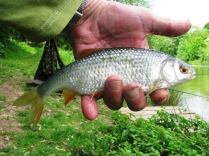 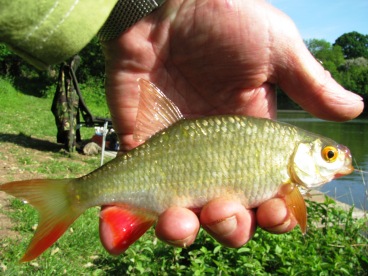 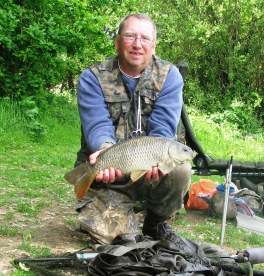 BATTERED CHIPS?? – Well, these days, you go to the chippie to buy a small portion of chips and unlike the old days when the old ‘six-pennorth’ was a perfect portion size for a single person the smallest offering these days costs £1.60 (at our chippie anyway) and you get enough to feed 4 adults… OK, you can buy various specials (eg pie’n’chip, mini fish’n’chip, etc) which come in a polystyrene tray and do have a single person portion BUT, if you want just chips on their own, then the smallest is the £1.60 lot… Anyway, I had need to visit the chippie the other day for those chips and, of course, had I plenty of leftovers and they looked and smelt as if they’d be excellent as bait with a orange crispy outer and spicy aroma … so into the fridge they went (and back in there again now ready for next trial session on Friday :)) and were taken out for this session. Catapulted a fair few free offerings and mid-session I baited up the hook with one for a couple of hours or so but to no great joy…. but, as I said, either bread wasn’t going great guns either – and my view is if fish shun worms and bread then its best pack up and go home as nothing else will work any better. So… conclusions from the experiment are ‘INCONCLUSIVE’ and further work to be done but I do think that they WILL prove effective in the right conditions… 🙂