As anyone who has read my blogs over a time will know I’m a ‘traditional’ piker in terms of when I actually fish for pike – for me the pike season starts on 1st October and stretches through until the 31st March… OK, so the original trad season originally ended on March 14th in line with the old general coarse season when that ran from 15th March to the 15th June and all coarse fishing was off limits, but nowadays coarse fishing is an all year round activity on still waters (bar a few eg sites of SSI and places that the owner applies his/her/their own closure of the waters) and so I stretch the season to include the whole of March. Mind you, October-March my fishing is almost 100% pike focussed with very few sessions whereby I head out with other other species in mind – usually those being perch/chub/pike lure sessions on the canal.

And so it was that on Friday October 16th that I set off to Pike Pool 1 armed with the pike rods (2 float, 2 leger and 1 spinning) and a coolbox of mixed deadbaits (pollan, natural sprats, red dyed sprats, sardines, blueys, jacks and smelt) – as usual a bit of overkill in terms of kit and baits as I only used the float rods and the sprats (natural and dyed) and the jacks.

The day itself was good – slight ripple, moderate temps, water clear – and I arrived on the car park at around 0800 and first casts made around 0900.

The two float rods were put in to operation with 40lb red greased braid, 15g cigar floats weighted with small bullet weights, and wire traces fitted with size 6 and 8 trebles. Original baits were a Xmas Tree of sprats on one rod (3 natural sprats, 2 red sprats) and a double natural sprat bait on the other and these were fished for several hours, twitching every 5-10 minutes and were both fished out in open water, close in under overhanging bushes and within a few feet of the bank and at varying depths from 3’ to laying-on/dragging the bottom – the water depths varying from 4’ at the bank to 11’ 3 rod lengths out – in fact, further out the max water depth drops to 40’ in a series of vertical drops/rises…

After 3 hours I decided to try a change of bait on the Xmas Tree rod before packing in at 1330 and so I put on a jack mounted to hang horizontally and fished on as before – and as usual the 1330 finish became extended in the usual ‘one last cast’, ‘give it to quarter to..’, ‘def last cast’, ‘’quarter past’, etc and, in fact, it was 1500 when I finally packed up having snapped one trace earlier when pulling for a break on a bush that I’d become entangled in – good thing is that although trace itself was visible in the bush it had snapped at the swivel and hence I got the rest of the end tackle back in good shape and even more pleasing was that the bait had fallen from the hooks and so no wildlife was going to grab it and get hooked up…

Anyway, in the 6 hours of fishing I had not one nudge/knock/dip or any other indication of interest in my baits – not even from the chub that usually play about with deadbaits – although they appear to have a preference for smelt which I didn’t actually use… basically due to some perversion of thought really… too good a bait to waste with fish taking them…. LOL!

Anyway, that’s it now for this week … hopefully more action will be had next week… 🙂 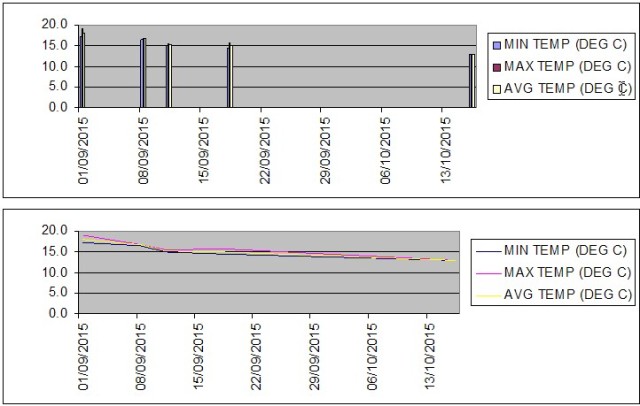