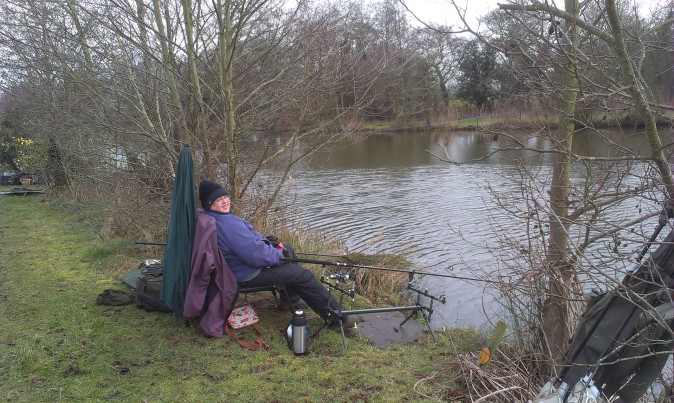 Friday, 13th February 2015, and Liz and I set off for the club’s ‘tench’ pool. As I’ve said before its not a tench pool solely – it does contain a mixed head of species – with the noticeable exceptions being pike and carp. Inhabitants include gudgeon, barbel, chub, roach, rudd, perch, tench, crucian carp and bream. An adjoining pool less than 10 yards away is stocked with carp (and chub) for those people who wish to pursue that species.

Anyway, as stated, Liz and I went for a general coarse session hoping for perch and tench – and for those who think it too early then this time last year, in similar temps, etc,  I was having good sessions for the tench on this pool… in fact they were all I could catch it seemed although I was hoping for a few perch.

We set off from the house a bit later than usual as to avoid the works/school traffic and probably arrived at the pool around 1030. We elected to fish on the leeward side of the pool’s island as to minimise the cool but light breeze coming from the south east but it was a pleasant day to start – but that didn’t last long unfortunately – with the breeze picking up and a constant drizzle which saw an initial air temp of 10.5C drop to 7.1c within 30 minutes and remain so until we decided to call it a day and head home at 1410. And, of course, when we get home there are blue skies and sunshine! However, even that disappeared within an hour and the grey skies, breeze and drizzle arrived ….

Anyway, the fishing… we both fished with a floatrod – laying-on style – myself with worm and Liz with maggot – and Liz also put out a light leger sleeper rod with a small meat bait. Swims were lightly fed with maggot but no cereal feed. First casts were made around 1100 but by our 1410 packing up time neither of us had a single bite or nudge. Also I tried dipping my bait in ‘Predator Plus’ but to no avail.