Tuesday 18th November and I’m on a stretch of the Staffs-Worcs Canal that is administered by Wolverhampton AA….

A beautiful morning with air temps around 10-11C. And can’t be more detailed on that as I had the thermometer problem of the impossibly high water temperatures being shown YET again … and overall the day was not without its other annoyances as I will describe….

First annoyance… driven 1 mile down the road, just about in front of the main traffic heading into the city to work and so the way ahead reasonably clear, when I realise I’ve left my bait bag with ALL my baits in at home! Thus I had to ‘U’ turn and head back to collect them and restarting the journey I was then caught right in the middle of the brunt of traffic meaning it took me almost 45 minutes to get to the other side of town and on the clearer roads – normally 10-15 minutes would have done that.

Anyway, got there eventually, and walked down to where I wanted to be and at that time it was very quiet with the sun just coming up…

And I elected to fish over to the far bank near overhanging bushes as can be seen in the last of the above pictures.

Second annoyance: The thermometer probe was dropped into the canal and registering around 9-10C… but a minute or so later this had risen to the high 30s and increasing… so pulled out and put away.

A few catapults of dead maggot were catapulted over the far side pre-setting up the station and tackle and this was supplemented from time to time with extra ‘pults full.

The tackle was set up – Des Taylor System 3 Avon rod with the quiver top section in place – 6lb line to a quick change link on which sat a size 12 Kamasan Eyed Barbless Animal hook on 4” 6lb braid hooklength and the setup completed with a free running link leger with a 3/8oz Arseley bomb stopped about 12” up the line from the hook. The first cast being made at 0900 baited with worm (Dendrobaena aka dendro).

Third annoyance: throughout the whole session I was jinxed with wrap-overs of the hooklength around the line above – even when I removed the quick link and just tied the hook directly to the mainline and despite feathering the line on the cast, etc.

Anyway, the line was out and fishing… and I had a bite, hooked into something – small – but it came off the hook halfway in… a few more ‘knocks’ and then a good pull… struck into something solid… and then that sickening feeling as the line just fell slack and I thought the line had parted… started to wind in and there was a slight resistance… and a small 4oz skimmer bream came to hand. Dunno what happened there… possibly the line had caught over sunken rubbish, and snagged and then sprung free as I struck? Something that will never be known…

And as I returned this fish to the water…

The fourth, and most annoying, annoyance: I hear the sound of petrol engines approaching and look round and coming up the bankside are a couple of Canals and River Trust guys with petrol mower and strimmer absolutely decimating the the bankside and destroying the natural flora and habitat of the fauna… Now, where I was, water to the hedgerow behind was a good 20-25 feet and the WHOLE area was subjected to the strimmer/mower attack leaving the area looking like a golf course green almost. In my view, there is ABSOLUTELY NO NEED to perform such desecration at all – and at most a 1 metre strip for walkers is the absolute most that would be needed but then again if there were enough walkers to warrant that then purely by their passage and re-passage the path would be naturally defined. And boats mooring can easily trample down a path from their boat for ingress/egress easily enough – and this would repair itself within a day or two of them leaving the spot. Got no money for police or for the NHS we are told and yet there seems plenty to waste for the C&RT to cut grass in a rural (lightly frequented) area and to do so in mid-November when everything is dying back anyway. Institutional vandalism I call it!! Anyway, I sat my ground and the guys had to work round me and my tackle – as per photos! Compare earlier photos to the ones below.

Anyway, they eventually left the area and peace and quiet returned – a few boats passed but far from annoying, at this time of year anyway, I find them quite an asset with their stirring of the waters and washing up the bottom mud along with the aquatic fauna (aka food) which can entice the otherwise lethargic fish into activity.

Anyway, I finished the day at 1300 with one other fish having been taken on a worm/maggot cocktail – a perch of around 5-6oz. 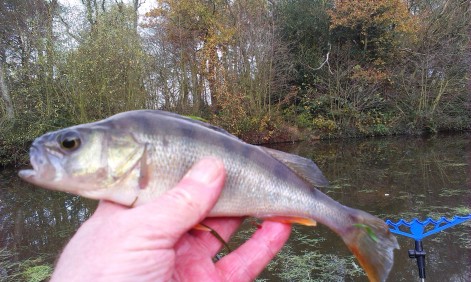 Well, I tested the other two of the thermometers that I have in a water butt – and they seemed fine. And I placed the probe of the errant one in a sinkful of cold water this morning and for a while it seemed good – an hour later the temp displayed had crept up to 30+C. So there IS a problem with it – and it seems that water pressure may play a part too as when placed in the canal it was less than a minute before the temp starting rising whereas, as I said, in the kitchen sink it was an hour or so and the creep up was slower too…

I think I may return to the area again next week but to another swim in the opposite direction from the access point – and hopefully have fewer annoyances to contend with – and less grass floating on the canal too which was also an annoyance as it drifted into and onto the line.

I’m unable to fish Friday or Saturday this week but hoping to get out piking on Sunday.