Sunday 16th November and its back to Pike Pool 1….

A bit of an overcast day with air temps around 10-11C. And can’t be more detailed on that as I had a thermometer problem again …

On arrival, at this time of year, my first ‘task’ is to drop the thermometer’s probe into the water in order for the readings to settle down before my first actual recording is made – and as that is done after the casting in of the last rod in use, and that I also set up unhooking mats, scales, unhooking tools, landing net, etc, prep and throw out groundbait and generally housekeep my station so that everything is ready and in its place before even tackling up the rods, that can be an hour or more after the probe is wetted … And on this session all followed the usual pace… and on throwing the probe in I saw that the temp was around 10-11C in both water and air… BUT when I went to take my first reading to record it – air temp was showing at around 10C but water was showing as 52C! Obviously not right… so I pulled in the probe and waved it around and temp changed a decimal point or so, holding in a clenched fist caused a quick rise of temp but still 50+C… OK… so I checked the probe and noted a gap between the wire and plastic covering of the probe so thought that water had ingressed and shorted across electronic connections giving wrong signals back to the main display unit. So, anyway, with the thermo out of action I hung the probe over a bush in a manner that water would drain away. And so, five hours later, I’m packing up and the thermo is still showing 50+C as the ‘OUT’ temp (probe).. wave it around… no change. Reset it, no difference. So I drop the whole thermo, body and probe, into the small zip lock bag I use to carry it and protect it from rain in use and place that in a pocket of my rucksack and head back to the car and home.. Arriving home 40-45 mins later, I get out said thermo to place on the radiator to dry – but looking at the display as I take it out the bag I notice both ‘IN’ and ‘OUT’ are registering the same and CORRECT temps of around 12C!! WHAT GOES ON!?

Its had five hours hanging in an orientation to aid draining of any water and in a breeze and that made no difference BUT 40 mins later having been in a sealed plastic bag inside a closed rucksack pocket all is well??? DOHHH!!!

Anyway, I’ve now sealed the casing/wire gap with Araldite – see if that makes a difference when I visit the canal tomorrow.

As for the fishing itself – 5 hours of legering a popped-up tail half of a trout and floatfishing a Xmas Tree of sprats – and not one touch.

A pleasant enough day though…

Tuesday 18th – on the Staffs-Worcs Canal with maggot and worm. 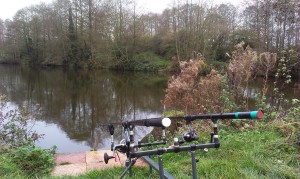 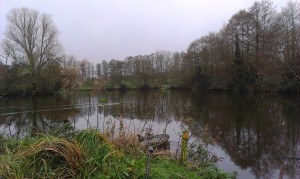 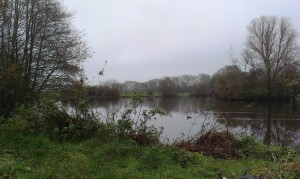