I finally decided that Tuesday 28th October would be dedicated to a canal spinning/lure session prompted by the purchase of a few Shakespeare ‘Devils Own’ (16.5g) blade spinners a couple of days previously.

So at 0830 I set off for my club’s stretch of the Shropshire Union Canal – good for perch, pike and chub. And I’ve heard that the roach fishing is good too but I’ve not been interested in roach or rudd at all – although I do think about targeting them from time to time these days… ummm, perhaps a float rod session one of the days?

I was travelling light with just the 9’ 10g-40g spinning rod with 12lb braid line, collapsible landing net and my shoulder bag with spinners and lures, flask, traces, etc so it didn’t take more than five minutes to be making my first casts after arrival at around 0915.

And so I ventured up the canal casting across to overhanging vegetation, bays and the usual ‘features’ as well as forward of me close to the banks on my side… and it wasn’t long that I lost my first spinner (the green/red/striped one) to a far bank bush! Thus a quick re-tackle was necessitated and this time the criss-crossed spinner was the weapon of choice….

A few more minutes of casting and retrieving followed as I worked my way along a length of overhanging far bank shrubbery and, then, a fish took virtually as soon as the lure hit the water and after a short battle a nice chub was in the net…. weighed in at 1.765Kg (3lb 14oz)… photoed… and returned…

And so the walk/cast/retrieve procedure continued for around another 100 yards along the bank – and then I snagged on the bottom and as I pulled and jerked to try to free the hooks there came a crack followed by a crunching sound and the top half of the rod folded over having cracked just above the joint between butt and top sections…. 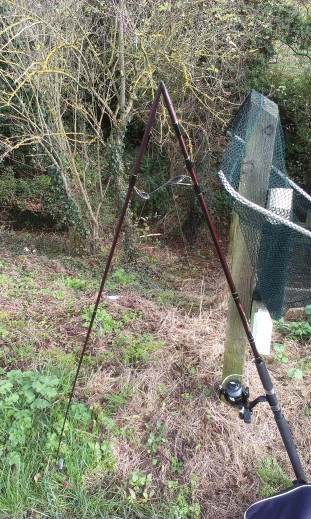 Anyway, I did manage to free the spinner and so I got to keep that but it did mean a premature end to my session as I’d only the one rod with me and the only option was to return home.

The canal in general had a covering of leaves as one would expect at this time of the year but certainly not not many as to effect the fishing too much by collecting on the line, etc as they can do… and there were more boats active than I’d expected too … but I’ve since realised its school half term hence the rise in numbers… in the couple of hours I was there probably 6 or 7 boats passed. But their effect was minimal really as I was more interested in getting the spinners into the edges/bays/overhangs of the canal whilst the boats were middle channel and the dirtied waters did not intrude into my area too much… plus with the use of blade spinners they have two attractive qualities (visual with the flashing of the spinning blade, plus an aural aspect with the vibrating/vortexing of the blade creating sound patterns through the water) and so are effective in murkier waters than plugs/jellies which generally only have the visual quality… I say ‘generally’ as some plugs have internal rattles that supply an aural function too eg the Shakespeare Big/Midi/Mini S series.

AND… before the day was out… I managed to get an identical replacement rod from Go Outdoors (now re-tackled and all ready to go)… and bought another set of the 16.5g spinners, plus the same set in 7g size, plus the Mini S lure pictured.

Next outing is to Pike Pool 1 again on Friday. On my own though as Liz has a driving lesson or some other engagement.