Friday, September 26th, and I start on the new half century of sessions, heading to the club’s silvers and tench pool for a session arriving there at my swim – the usual peg 11 – at around 0800.

As usual, groundbait was mixed and fed, along with maggots, into the 2 areas I’d be fishing for the session – to the left, between the entrance to the channel  between island and lily pads off the mainland’s bank, where I would be laying on with worm and maggot and an area to the right to be fished with a ‘sleeper’ leger rod on a bite alarm baited with bread originally. I also baited with maggots just off the edge of the lily pads to my left as a standby swim to be built up over the day and this plus the two main areas were fed with small maggot helpings throughout the session.

Early morning on the pool – the island where I fished opposite to is to the right. The blue rope across the pool is one of several that are placed there to deter cormorants, the idea being that they need a long section of clear water to take off and so they are being denied that facility but it does spoil the feel of the pool when fishing there slightly  but better that than a fishless pool.

Having baited the swim areas up, the two rods were set up – the float rod with a driftbeater float set slightly overdepth and all shotting placed 4” from the hook in the standard laying-on/lift method way and hook was a size 14 – the leger rod was set up as a standard sliding leger with the 1/8oz lead on a 3” leger link and stopped about 18” from the size 10 hook. Both rods had 6lb main line and short braided hooklengths.

And so it seemed a good day was ahead but for quite some time after I was only getting small nudges on the float and when I changed the worm to maggot the same occured and the ends of the maggots were sucked and stretched indicating that small fish were around and possibly to blame. So back on went the worms… and at around 1245 the second fish of the day was landed, again on the float rod, a small perch of 3-4oz … 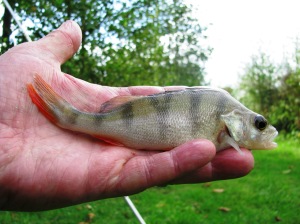 Meanwhile, action on the leger rod had almost been totally non-existent and so bait on that was switched to maggot and re-cast…

Around 1445 with just nudges on the float rod I decided to start fishing the ‘standby’ swim on the edge of the lily pads and at around 1500 had a good fish on temporarily which proceeded to do a surface roll and throw the hook… and in the next 45 minutes this happened a further twice plus I changed the leger rod to a small worm and had a tiny perch of around 1oz, if that.

So it might have seemed a poor session – but in fact between 1st July (Session 30) and this session (51) my total catch on this pool in several visits consisted of a few very small perch – so it really is an improvement :).

Also, as night time and general day time temps have been noticeably dropping over the past couple of weeks it is time to start reading those waterside values!! 🙂

This is a noticeable drop from the measured  water temp noted at the water (albeit a different venue) last week when the temp was around 18.5C at around 0800.

And also making it noticeable that winter is heading in now…. 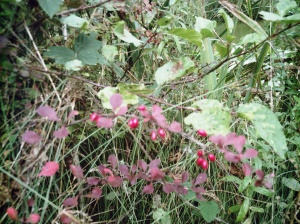 It seems the camo for the new season is ‘Hi-Viz’ 🙂