Tuesday August 12th 2014 and it was off to the club’s tench and silvers pool again in the hope that things would turn out better than the previous few visits when thing had seemed to slow down a bit.

I arrived at the pool at around 0715 and I had fears that the ground may not have been passable due to the recent rains and that I may have needed to take the tackle by barrow from the car park at the near end of the pool to the far end where I intended to fish. However, those fears were quite unfounded and the ground was, in fact, quite firm and so I was able to drive straight up to peg 13. I walked round to peg 14 (from where the above photo was taken, looking back at 13) to have a look at that peg but I finally decided to fish from peg 13.

The swim allowed access to a line parallel to the end of the island to the right and to the left to overhanging growth along the island’s edge. I baited two areas – just off the end of the island and the area near the overhanging vegetation – both with crumb, pellet, maggot, a few particles and mixed with hemp oil and sweetcorn blitz. I also catapulted small meat samples (small lengths of Webbox Cat Treat sticks and chilli coated sausage) into the end of island area. And both areas received regular small helpings of loose feed throughout the stay.

Weather was a constant mixture of blue sky and then grey cloud intervals and although breezy the day was quite mild starting at around 12C and rising to 19C by the time I tackled down at 1400.

As to results, well, in the first hour I had two ‘mini’ runs – or possibly line bites – on the worm rod but other than that my new bite alarms on their debut outing had nothing else to do for the remaining five hours as I had not a further single nudge in all that time.

The alarms (2 Nash S5R wireless heads, wireless receiver, carry case) were won in a draw-from-the-hat type competition with ‘Improve Your Coarse Fishing’ magazine back in April but I’ve only just received the full kit due to problems Nash has had with their supplier. Anyway, although they didn’t get an extensive testing they did seem to work quite well. Hopefully on the next trip they will see more action.

Whilst fishing I discovered that I was sat within three feet of a wasp nest in a hole in the bank and so spent most of the day in clouds of wasps – but we seemed to reach an accord of ‘I don’t hassle you, and you don’t hassle me’ which seemed to work ok bar for one errant wasp flying into my ear!! 😀

Other pics of the day: 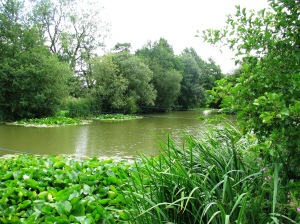 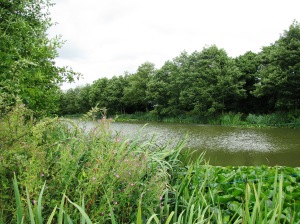