Friday, 27th June 2014, at 0730 and I was back at our club’s most popular pool for the first time since March of this year when I ended my piking season. Even for me this is quite a passage of time to visit here but as this pool is predominantly a carp pool, and carp aren’t really a particularly favourite species of mine, I’ve tended to head to our non-carp pool and also I’ve picked up a card for another club’s waters which I’ve been trying out recently. So, anyway, I decided to have a trip back here as a catch is ‘certain’ – one of the reasons for its popularity, I suppose, along with its closeness to the club’s ‘home base’….

Weather for the day was forecast for heavy rain – and I suppose that was the reason I was the only person gracing the banks for the whole day. However, the weather was quite OK in general, mostly dry and warm – too warm for me really as, before I left the house, I’d donned a thermal layer as it seemed a bit chilly at that time but by the time I’d arrived at the pool it had warmed up a fair bit and remained so. 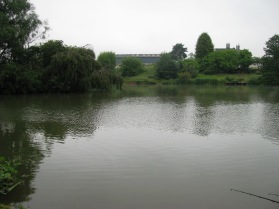 However, there were a few spells of rain – about an hour of light drizzly type stuff and two half hour heavier bursts, the last one accompanied by thunder and lightning. But on arrival the brolly/shelter had been set up in anticipation and so this was just a minor inconvenience…. And soon after this last cloud burst the skies cleared to blue skies and bright sunshine for the duration. 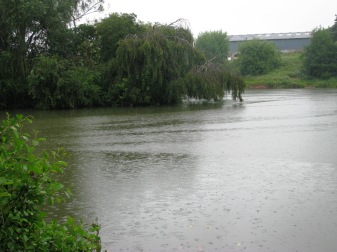 On arrival, I baited up two swims (but barely used them!) by spombing out breadcrumb, dried blood, mixed particles and maggots – one baited area being on the edge of the overhanging willow tree that you can see in the photo above, the other in open water to the right in line with the tall tree next to the house in the previous picture and level in distance with the willow. The willow tree swim was fished with extra-hot chilli coated sausage and the open water swim was fished on bread – bar for only the first hour or so. The reason I didn’t actually fish those swims much was that there was a lot of surface activity going on with fish defying gravity and ‘falling’ out of the water in a vertical direction and so I catapulted out loose floating bread and this was soon slurped up… and so I wound in my leger rods and swapped over to using my ‘floater’ rod which I had set up earlier.

Anyway, in the hour that I was legering I was getting bites and pulls and landed my first fish of the day – a 3lb 14oz Mirror Carp…

But, as I say, the fish seemed to be taking floating baits well and I love to fish floaters especially for carp – the creme de le crème method which adds a bit of enjoyment to catching an otherwise, to me, mediocre species.

And so the floater rod came into operation – basically a 10’ 1.75lb TC rod (actually a 1970’s Winfield ‘Specialist Angler’ rod) loaded with 30lb greased braid (to make it float) straight through to a size 4 Kamasan B981 barbless hook. Also on the line are a few tranklements –  small leger stops that enclose a small link swivel and a small cork ball, the purpose of which are (a) stops – to keep the swivel within a defined area ie to set the length of the end piece/hooklength, (b) link swivel – to attach a ‘float’ for adding casting weight if needed – but not used yesterday as the fish were within 10 yards of the bank and often just a few feet away and (c) the cork ball is to counteract the weight of the swivel and stops when they are not used and so keep the line fully buoyant.

And so that is how I fished for the rest of the day until I packed in at around 1530 – using bread/crust or pieces of yorkshire pudding (49p per bag of 12 from Aldi – each provides about 1-4 baits depending on the size of bait you want).  I kept the interest of the fish up by throwing out loose pieces from time to time and action was virtually non-stop (apart from the time spent sheltering from the rain).

What did surprise me though – the number of bream that I caught by this method! The first fish taken by this method was a bream of 1lb 12oz – and another 7 of similar size were also taken. And over the course of the session another 8 carp (9lb 5oz Mirror (almost a Leather but for scales just below the dorsal fin), 5lb 11oz Leather, and Common Carp of 3lb 8oz, 3lb 15oz, 4lb 0oz, 5lb 0oz, 5lb 10oz, and 5lb 12oz) were added to the one taken earlier on the legered bait… 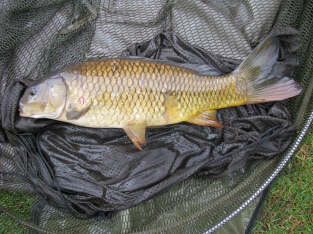 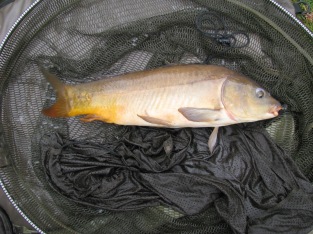 Yorkshire pudding…. Works well as a floating bait with the oily dough acting to hold the bait well up in the water. Only problem with these cheap Aldi frozen ones is that they are a bit too ‘weak’ for me. Hook on well and can be cast a considerable distance under their own weight BUT tend not to stand up to too much ‘tail bashing’ by suspicious carp and come adrift too easily at times – and also come adrift when retrieving but that is also the case with bread too. I’m thinking that I should maybe try a more expensive product OR even better perhaps making my own modified recipe ones to try to create a ‘tougher’ product. I’m not sure of the full standard YP recipe but I know it’s of a batter type, and one which I would think uses self raising flour or plain flour with baking powder to give the fluffiness, possibly? In that case, perhaps, just using standard flour, possibly with a small amount of baking powder for a slight amount of raise? What about using a strong ‘bread’ flour? Just cook in a flattish baking tray as one-piece that can be cut/ripped to give the desired bait size? Food for thought there in a punnish sort of way 😀