Friday 13th June 2014, was a turn for the better after the previous two outings.

Firstly, it was hot, sunny and dry – and, in fact, the first session of 2014 that I did NOT wear at least one item of thermal clothing – no base layers, no army long johns, NOTHING! And even I was forced whilst fishing to remove not only my jacket  but my lightweight jumper too – most unlike me as removing the jacket usually only occurs two or three times a year!

OK – as to the fishing – that wasn’t too bad either as you’ll see but I’ll lead you through my day….

Set off from home at 0600 over to a pool the other side of Newport, Shrops that I’d planned to visit and mentioned in my previous posting. Found the pool – a first visit for me – without difficulty… well, it was only one turn off the A41 so was never going to be difficult. Parked up the car and then went for a walk around to check out a good swim for the day. 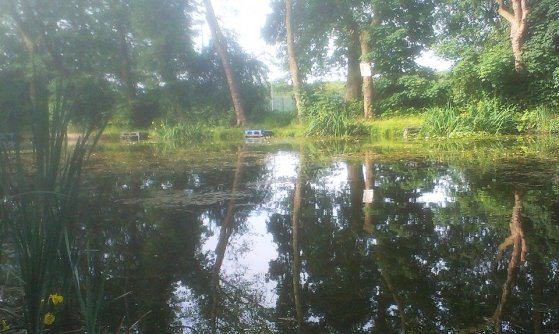 The pool wasn’t as large as I’d imagined from the on-line photos – to those in the know, about the size of my main club’s carp only water but without an island – with 21 permanent match pegs marked out. The first thing I noticed there – and hardly missable! – was that the carp were spawning. All the edges of the pool were alive with carp of around 2-5lb mark shoving and bashing each other in the way that only carp love – and the main weed beds (Potamogeton natans) in the centre as well as the water lilies at the pool edge were getting a good thrashing by the little breeders too! : 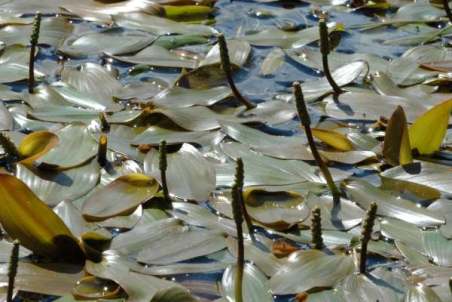 So, given this, I found a nice swim at the bottom end of the pool and baited up with a few catapults of mixed particles and a few of maggots. And, as there seemed to be a lot of surface activity, I ‘pulted a few piece of floating bread too to see if there would be any interest.

I started off float-fishing (laying-on) with my usual set up (6lb mainline, 4” 6lb braid hook length and size 12 hook, and an antenna float overshotted) baiting the hook with maggot. However, with the over-hormonal carp zooming around I was getting a lot of line bites and the broken weed that was being created and drifting about was a bit of a problem too. So, I switched over to my ‘floating bait’ rod fitted with 30lb (greased to float) braid straight through (a bit OTT for this situation but I mostly use it on waters expecting large carp close in) to a size 10 hook … smaller than my usual size 4 or 6 but the rules of the controlling club limit hook sizes to a maximum of size 10. Also on the line is a link swivel that can be used to attach a controller float if needed (basically used as weight for longer casting than be made with the bait alone) but which wasn’t required this time and a cork ball to help keep the line floating near the bait and to counterbalance the link swivel when not in use. I baited with pieces of bread and eventually I had a take – a rudd of around 4oz. After this, not much seemed to be too interested and about 30 mins later I switched back to the float rod, adding a worm to the maggots as bait this time. And this added a small crucian carp to my list…. 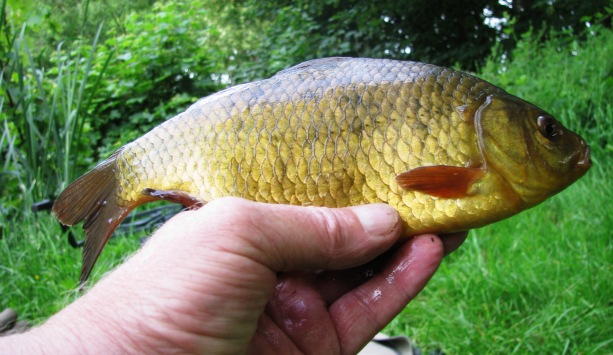 However, as I said earlier, with the breeding carp, fishing was difficult with line bites and the floating weed and I also feel, in general, that carp are so ‘hyper’ when in the spawning mood that they tend to disquiet the other fish and so makes them less interested in feeding. And with this in mind I decided after being at the pool for around 3 hours that I’d move on and visit a water of my main club’s at Lilleshall that was on the way home for a few hours.

So, I arrived at the Lilleshall water at around 1100, to find a friend of mine and another there having been night fishing over the previous two nights with a bit of success and the news was good – fish were feeding! My mate was fishing the swim I had fished on my visit of the week before but I had intended to fish another peg further up the pool but it seemed his mate was in that swim – but as it turned out he wasn’t when I looked across from the far bank later – and so I decided to give a swim on the corner of far bank a go but on arriving there I found a scum and a lot of debris collected there and so continued up a few swims and settled in peg 16.

So I set up my two leger rods, both  8lb mainline, 4” 8lb braid hooklength but with a size 12 hook on one and a size 6 on the other. The swim was baited with prawn, mussel and maggot both to the left and right. The right hand side was fished with maggot/worm on the size 12 and the left with mussel/prawn on the size 6. And again I threw out some bread pieces to see if floating baits would be taken.

There were plenty of BBS’s (Big Black Shapes) swimming just sub-surface all over the afternoon and over the first couple of hours I had a few short pulls on the mussel/prawn rod but nothing that became anything tangible to strike it – possibly just line bites. However, then, and literally under my rod tip, a snout rose from the water and sucked down a piece of my test bread…

So, making as little disturbance as possible obviously, I deigned to get my ‘floater’ rod out of the quiver, changed that tiny size 10 hook to a more suitable size 6, and placed a floating bread bait just out in front. Within 20 minutes the carp was back, taking firstly a couple of free floating bread samplers and then the bait piece and – as *the line started to straighten* – I lifted and pulled firmly into the fish and then all broke loose with the fish tearing off down the edge of the pool under overhanging bushes, etc. but 5-10 minutes later it came to the net… a nice 12lb 11oz Common Carp. 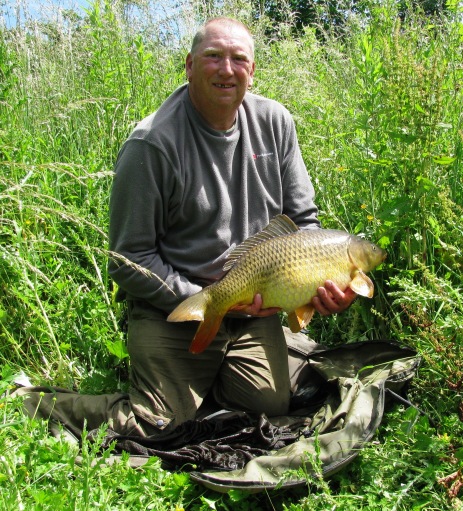 And a little later – and the heat was building up, note the loss of the jumper but the retention of the long sleeved T-shirt to prevent the much hated sunburn… another nice hard fighting common of 11lb 4oz graced the net… 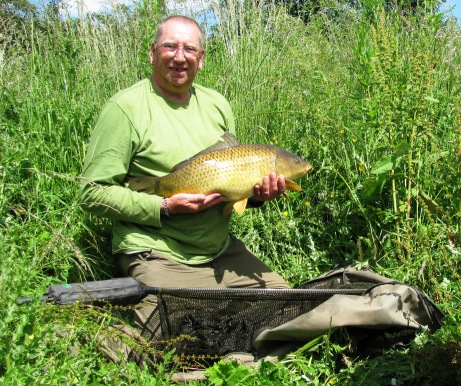 Then another – but unfortunately I didn’t get to land it as the line snapped just above the hook – presumably from wear/rubbing whilst playing the previous fish through the bushes, etc as I felt the fish but the line parted on the strike – although I do check and test the end tackle after each fish or recovery from snagging.

But just before I packed in at 1645 another nice fully scaled mirror carp of 10lb 4oz was landed…. 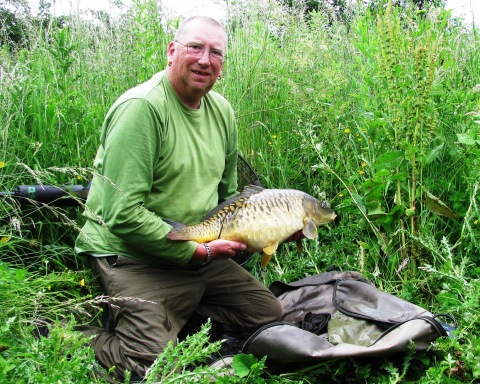 Not sure of future plans other than Liz and I will be fishing on Saturday 21/06 at a local Hall’s pool which is only fished for five weekends a year – and that by invitation to our club as part of the Hall’s fund raising activities which terminates with its Open Day. We’re allowed 6 anglers per day on each Saturday and Sunday of the period, each ‘donating’ £10 to the local church’s funds. A great pool and it’s usually a great day there. But I may, in the week, sneak a short, 0400 start, session in at the local canal.