Monday, 17th March 2014, and I’m on the bank of Rock Pool at Himley Hall. This is the smaller of the two fishing pools on the site, the other pool being the Great Pool, and this pool has only just become available to fish again within the last month. Back in the 80’s it was a trout pool and was fly fishing only. It was closed to all fishing in 1987 and re-opened, as I said, about a month ago as a coarse fishing pool. The stock of the pool is unknown but it seems, based on reports of catches I’ve heard of,  that there are roach to 1.5lb, pike over 10lb, and perch. There are only 5 fishing pegs available, on a 50 yard stretch of the roadside bank, with parking adjacent so tackle transport is easy, and all pegs are platformed – how good facility is depends on whether you use a seat with accessory fittings, etc otherwise you need long banksticks for the rod rests,  etc – which I luckily (well, not really – well planned) carry in my kit anyway. There are no fittings on the platforms for stand-alone banksticks, etc so you need to place them into the water/ground alongside and the platforms are 2’-3’ above water level at the edge. OK, so I fished the middle of the pegs, and was the only angler on the pool all day, fishing from 0800 to 1630. There are a few rules that apply to this pool – amongst them being a max hook size of 14, max mainline strength of 8lb and a max hooklength strength of 4lb – but these do NOT apply when pike fishing. It seems that keepnets are allowed too BUT fish over 5lb cannot be placed in such. 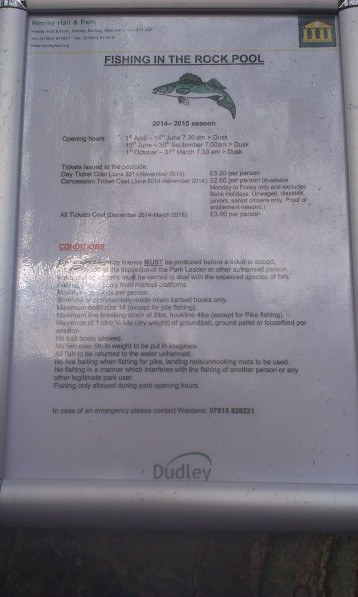 Below are a few pics of the pool taken from my peg …….. 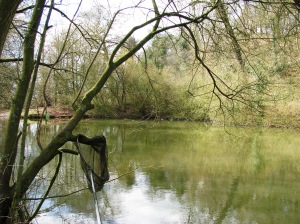 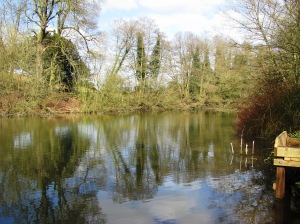 Before fishing I used my depth finder and discovered the depth to be a fairly constant 4’ 6” all around after a slow drop away from the edge so I elected to fish about 3-4 rod lengths out and catapulted a few particles and dead maggots into my swim before tackling up my float rod to fish laying on style, fishing 6lb line, 4lb hooklength and size 14 hook throughout the day. Baits used were worm, bread and prawn used in conjunction with various dips.

AND….AND….AND…. as the title of this posting suggests…. not only did I have bites BUT I also caught fish!! OK, not major sized – one roach around 6oz and a chunky perch that looked the size of perhaps a 10oz’er but was really broad across the shoulders and weighed in at 14oz. Also lost another roach of around 4-6oz when the hook lost hold. Also had quite a few lifts that I was unable to connect with.

All bites came on worm with not a touch on bread or prawn even with ‘chopped worm’ dip and others applied to them.

Throughout the day there were quite a number of ‘fry scatters’ around the pool suggesting predator activity – and the ranger, when collecting the ticket money, said that quite a few pike had been caught during the previous week. Other than that I didn’t see much suggestion of large fish bow-waving although a good number of times bubble clusters appeared – and one appeared just off the left of my platform followed by a sizeable tail swirl pattern in the water.

Anyway, it was a pleasant day – air temps started at 10C, and reached a peak of just over 15C. Water temps were excellent, starting at 9.9C and rising to 11.2C over the course of the day.

I may return to the pool next week with my pike gear for my pike season’s final attempt to contact an Esox…or two :)