Today, Monday 27th January 2014, saw me visit my club’s stretch of the Shropshire Union Canal – but only for a very quick visit as it turned out. I arrived around 0830 intending to have a lure session for pike and perch (and chub too if they were interested in the lures) but  due to the water being very badly coloured – well, a clay suspension would be a better description really, I left at 0930. I had walked a few hundred yards along, casting in the ‘usual’ places with not a single touch – which was not at all surprising really due to visibility being so poor that the lures (a Shakespeare Midi S in Fire Tiger colours, and a Shakespeare Big S/Small S tandem lure in a similar colouration) were invisible to the eye at 3″ in depth. I used those particular lures as (a) they were the brightest colour I had and (b) they have a built in rattle to produce a sound pattern for predators to home in on. But as I say the water was so densely coloured I had no confidence at all and so decided to leave and visit one of my club’s pools for a couple of hours, that particular pool being on the way back home anyway, really. 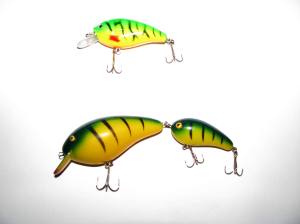 So, I arrived at the pool at around 1015 and no time was spent setting up rod as it had been loaded up in the car fully tackled from the canal visit. There was no-one else there – and it remained so all the time I was there – millionaire fishing! 🙂

I wandered over to the far corner, one of my favourite places for all species as there is a shallow water (ca 3′) bay leading out into deeper water (ca 11′)  and also an island within casting range. I used a selection of lures including a roach coloured Shakespeare Midi S , a red and yellow banana deep diver,  and a Savage Gear Hard 4Play ‘Trout’ (19cm/52g) lure and spent around 45-60 minutes in that area without joy. I then decided to go back around the pool to fish the bank opposite my then current location and whilst doing so I made a few casts with the SG 4Play ‘Trout’ in good/likely looking places as I passed them by – and at one point I had a pike of around 5-7lb follow the lure in but only then to turn away at the very last moment :(.

Over the next hour I fished my way around the rest of the pool without any further excitement, eventually deciding to call it day at around midday as I needed to sort various things out for tomorrow.

But I did, on the way home, call in at the local Morrison’s and pick up three herring to try as bait later in the week. Never used them before and on a Facebook topic someone asked opinions of people’s favourite pike deadbaits which made me think of the herrings and the fact that I’d never actually tried them. Actually, Morrison’s had plenty of sprats too but had no sardines or mackerel – but I’ve plenty of all three of those in the freezer anyway.

BUT… the day wasn’t entirely fruitless – rather than I losing a lure or two, I actually found  a nice one bobbing in the margins that will be a good canal choice, I think – a floater but dives quickly and moderately deeply too it seems. And I also came home one bubble float to the good – bobbing away, again in the margins, not too far from the found lure actually.

As an aside you will note that I refer to the ‘S’ lures as being Shakespeare branded – there are also other makes (eg by ‘Predator Force’) of these type of lure (referred to generally as ‘alphabet lures’ due to the alpha-character type naming).

And the  Shakespeare ‘S’ lures were actually based on the original Cotton Cordell Big ‘O’.
The ‘old/original’  (70/80’s) Shakespeare ‘S’ models were made in the UK but the newer model is Chinese manufactured.

To quote a post by Andy MacFarlane on the ‘pikengler.forumotion.com’ forum…

Andy Macfarlane on Sun Nov 02, 2008 6:42 pm
Big ‘S’ lures are still made but here’s a clue. Look for the ones with a little hole next to the rear-treble hanger. The old ones (the best ones) were mounted on a little threaded screw for painting and the hole is still visible. The new ones though, don’t have the hole. If you can’t get the Big ‘S’, the Cotton Cordell Big ‘O’ can still be bought from places like Cabelas. The Shakespeare Big ‘S’ was actually a copy of the Cotton Cordell Big ‘O’. It’s the ‘O’ and the ‘S’ that gives these lures the name Alphabet lures, just in case you had read that term somewhere and were clueless.”

Besides the ‘S’ and ‘O’ models there are many other models with different alphabetic naming designations. 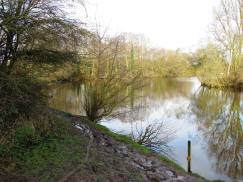 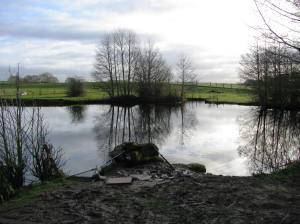