Monday 20th January 2014, 0900,  and I’ve just made my first cast  from the banks of the Staffs-Worcs Canal, in area not too far from home. Target for the day are to be perch and chub, and in view of this I have selected an area of canal just below a lock where the centre channel flow travels from the lock to my right off to my left, and the nearside flow and offside flow are reverse that ie flowing from left to right and form two slow moving eddies on either side. I have selected this area because (a) it is little fished (only seen people fishing here once before on several trips and that mid-summer – probably due to the fact that between this location  and the nearest access point is a longish stretch of  a ‘No Fishing’ area and so people don’t bother to even get up that far), (b) there are usually fish in the area from previous experience and (c) the morning started with a heavy frost and temps down at 0C, thus moving water, due to friction, will be that *bit* warmer, I feel, albeit maybe <0.1C but every little bit helps.

Tackle:
Grandeslam 11′ Des Taylor System 3 Avon fitted with quivertip top, 6lb mainline with a 4 inch hooklink of  6lb braid attached via a size 14 snaplinked swivel and terminated with a size 12 Kamasan ‘Animal’ eyed, barbless hook, and a 1/8oz Arseley bomb for weight stopped on the line about 9 inches from the hook with an Enterprise Tackle Adjuster Stop. 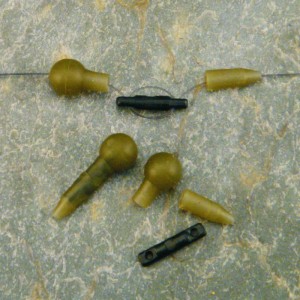 Bait:
Tulip brand ‘Bacon Grill’ – good item, cheap from B&M (aka Bargain Madness) but also unlike its competitors it comes in a lidded plastic pot similar to marge/spread ones which mean you can take it unopened to the water side – which you cannot do with other brands as ‘tins’ are banned and thus need to be opened at home and the contents placed in a bag or plastic pot, etc which means if you open too much then you can have waste to discard if it goes off before it gets used up but if not enough is opened then you run out of that type of bait – and usually when its the winning one!  B&M also do Tulip Luncheon Meat and Chopped Pork With Ham. Also took large Aldi frozen prawns (only the cooked version although I do have uncooked tiger prawns in the freezer too), and a loaf of bread – unused as it happens but that will be dried until crisp and then powdered to add to my growing store of breadcrumb (5 gallon+ in store at the moment). When I say ‘breadcrumb’ I do so in the broadest possible way – basically, if  its to be thrown away and cereal based (cornflakes, porage oats, leftover crusts, stale biscuits, cake of any kind, tea cakes, anything like that all) it gets dried, food processorised and added to the bucket… so contains bits of dried fruit, seeds from buns, etc, etc as well as crumb…. to me you need some actual nitty gritty to hold fish – imagine a gorgeous smell coming from an Indian restaurant but when you enter the tables are just full of bits of broken poppadums? Would you stay long? How about if there were full poppadums and mango chutney, riatta, possibly a few small bowls of tasters? Hang around longer then? YES! and so with my basic crumb.  Also a pint of dead maggots for loose feed and a few pots of flavours/dips.

Anyway, as I said first cast, baited with a small (1/4 inch) cube of luncheon meat was made at 0900 to an area baited with a few cubes of said meat, dead maggots and a few prawns. At 0930 the quivertip bounced a few times and then nothing for the next 5 minutes, so I wound in to check the bait was still in situ, which it was. I re-casted to the same spot, and 2-3 minutes later the tip again went round a few degrees and the re-settled… and basically that consisted of the entire day’s excitement as despite bait changes and added flavourings, nothing would induce further action. And at 1200, despite having intended to stay until 1400 I packed up and headed home… however, that decision was not 100% influenced by the lack the action – I would say more  of a 30%-40% weighting. The remaining 60%-70% being due to….. COFFEE TORTURE!!!!!!!

Ok, cold morning ahead, flask of fresh hot coffee is packed in bag as you would….
However… when I put the flask into its case, I forgot to put its top – aka CUP – on it… so feeling the cool a little at around 1000, I take the flask from the bag, open the case and … no drinking utensil! A search through my bag also threw up no alternative pot or similar to use in lieu of missing device – and an attempt at sipping the scalding liquid directly from the flask was not a good idea. So there I was, getting thirsty and cooler as time passed despite slightly rising temperatures, with the flask making obnoxious faces at me from a yard away (actually, would have felt better if I’d forgotten the flask completely rather than it brazenly sitting there grinning at me!). And at noon, I succumbed and headed home…

Option 1 – another trip to the Staffs-Worcs but at a different venue – and 2 possible venues in mind. Both I have never visited before and would be spinning/plugging/dropshotting for perch.

Option 2 – a trip to the Shropshire Union, club stretch, lure fishing for pike/perch.

At the moment, option 2 is the one mainly in mind.