I arrived at the water around 0945 with the lure rod ‘baited’ with a 13cm Savage Gear Soft 4Play ‘Fungus Roach’ in a clear medium scull lip to which I’d added an extra ‘stinger’ hook – a size 6 single that sat in the tail and was connected to the scull lip with a short length of 15lb braid. The reason for the ‘stinger’ was that I find many times perch harry their prey by tail nipping, or grab the back end of the lure short of the main treble hooks and so this stinger is meant to catch these bites… and the use of braid is to allow the lure to work normally, and the use of wire, due to its stiffness, severely hampers this. As I say, this stinger is meant for perch, and I think, pike would be at least 99% be hooked on the main treble and thus the chance of  the short (3″-4″) braid being bitten through and the pike lost is absolutely so minimal to be discountable. Anyway, spent an hour and half walking and casting up the canal without result or any sign of attention (no follows, etc). So at this point, I decided, based on information I’d had the previous evening that a couple of very good pike had been taken from one of my club’s pools that day, to head off to that pool for a couple of hours…

I arrived at the pool at around 1145, tackle pre-ready from the canal. In fact, my tackle for the day consisted entirely of the 8′ 6″ lure rod, 30lb braid mainline, a collapsible landing net and a small bag of sundries (extra lures, etc) and my flask of coffee. So I started off in my favourite pitch and fished several swims around the pool – from deep water to the shallows but nothing was doing. However after an hour or so I elected to try a change of lure from the Savage Gear to an original (80’s) Shakespeare Big S in green and purple scaling pattern – and first cast following the change – BANG! Fish on!… However, not the pike I was hoping for but a nice fit chub of 2lb 7oz 🙂 So filled with enthusiasm again I continued onwards and into more swims but no further action was forthcoming. But I did lose my Big S 😦 Firstly, I made a major miscast and my lure ended 20′ up a tree (DON’T ASK!) and had to pull for a break… however, when the line broke the lure and the broken feel from the tree and I was able to cast across it later and snag the loose line and trace and retrieve it. BUT I never checked it other than to look to see if the hooks were still OK, never looked at the ‘O’ ring that the line connects to, or its connection to the body… and on a later cast that caused the line on the reel to jam and thus pull the cast up sharply, the lure carried on out on its journey due to the body having freed itself from the damaged ‘O’ ring. Nothing I could do to retrieve this time other than wait for the wind to drift it over to the shore somewhere but as that point was thge other end of the pool and the breeze fairly light that would have taken hours….. Hopefully, it’ll get found and the finder will repair and get it back working… excellent lure! In fact, on getting home I scoured eBay and the ‘net and have 6 or 7 new ones on order now albeit I was unable to get the same patterning as the original – and note that the current models, although visually similar, are not of the original British, 80’s made quality but, in fact, these days are made in China.

Pic of the Day: 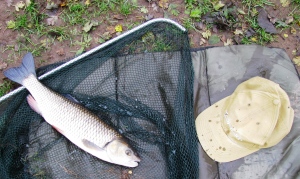