I went out for a session on Monday 4th November 2013, a departure from my normal Tuesday session due to the forecast for Tuesday not being so good – and made a good decision weatherwise I think, despite the car having it’s first iced over windscreen of this winter – but only cat ice and the first wipe of the wiperblades soon cleared it without recourse to the heater. And pool looked gorgeous on arrival… 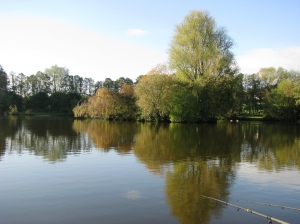 The session ran from 0800-1500, followed by a 45 minute session with the lure rod before heading home.

Anyway, the same pool as I fished on the previous session but from a different peg – almost opposite the one fished on the last visit. Again I Spombed (c) out several loads of dead maggots on arrival and topped up occasionally with further Spomb loads over the day.

Tackle consisted of the usual two 1.75lb TC Avon rods, both fitted with 8lb main line, 8lb braid hooklengths and legered with 1/4oz Arseley bombs on 3″ sliding links. One rod had a size 12 barbless hook baited with maggot, the other a size 6 barbless used with bread and meat baits.

Action was steady throughout the day, if not hectic as it seemed it may have been – as first cast with the bread rod and 30 seconds later, whilst still prepping the second rod, the indicator flew up and the beeper beeped – and a 2lb 1oz common carp was soon netted. 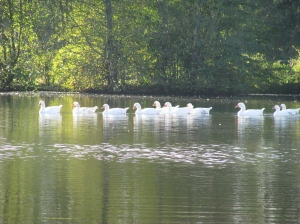 After that things calmed a little but bites were steady throughout the day bar that many were not as bold as this first fish and simply gave slight lift and dropbacks of 1″-6″. I did have one hectic moment though as a fish on the bread baited rod was being landed, the buzzer on the maggot rod went off… struck into the fish and replaced the rod on the rests whilst I landed the first fish, unhooked it quickly within the landing net, checked that the fish was still on the other rod which it was and so so landed that fish alongside the landing net’s original occupant.

At 1500 I packed up the carp tackle for the day, loaded up the barrow ready to leave and then set up my lure rod – an easy task as I carry all my rods pre-tackled in a quiver type holdall and so I needed only to push the two rod halves together of the 8′ 6″ Mitchell Firebird rod and clip on my chosen lure (a 13cm Savage Gear Soft 4Play ‘Fungus Roach in a green scull lip) onto the snaplink of the wire trace at the end of my 30lb braid mainline and I was ready to start. Anyway, I fished the 5 swims from my original swim back to the car and although nothing was attracted from the first four, but at the fifth, a nice corner peg with a scaffold stage and an apple tree overhanging a small reed bordered bay there was a follow and lunge from a pike but the lure was missed and despite casting over the area from several different angles and running the lure by several different styles (jigging, sink and draw, slow and steady, etc) I was unable to elicit further interest and finally decided to call it a day and left the water at around 1615.

Catches of the day:

Temperatures of the day: