Thursday, August 22nd 2013, saw Liz and I at Nordley Pools – having made it this time after the problems of the previous intended visit which resulted in the car breaking down en-route and having to be accompanied home by the Green Flag van once he had got the car going again to ensure all was well.

We set off at 0700, arriving at Nordley Pools at around 0745. We usually fish Pools 3 or 4 (there being 6 pools in all) but this time we had decided to fish Pool 2 and the car park for Pools 1 and 2 is different than for Pools 3-5. Another smaller area is available for Pool 6 (not really a pool IMHO… more a small duck pond that is usually covered in Canadian Pond Weed/Duck Weed). Anyway, on arrival we were surprised to see 3 cars already parked up so we decided to see where the others were fishing before unloading the car. There was no-one on Pool 1 – all were on Pool 2 with 2 people set up on the far (left) bank and at least person on the near (right) bank. So… on the way back we looked again at Pool 1 and there seemed a large amount of fish activity (carp bubbling and bow waving, and a lot of swirling from smaller species) so we decided to fish Pool 1.

We set up our leger rods (2 each, 11′ 1.75lb TC Barbel Avon rods) with 8lb mainline, and I also set up my floating bait rod (11′ 1.75lb TC Specialist Angler rod with 30lb greased braid to size 4 Kamasan B981 barbless hook). The swims were pre-baited with dead maggot and particle mix (hemp, wheat, maize. chick pea mainly) whilst we set up the rods, rod pods and other equipment.

Liz blanked on the day although she did have a number of aborted takes on pellet and luncheon meat throughout the day but nothing on her maggot rod. Myself, I had a 9lb 12oz Common Carp at around 0930 on floating bread, and a 4lb 1oz Common Carp on legered bread at around 1630… and also snapped on the strike of another fish using prawn just afterwards, due probably to a fault in the line as I felt the fish but the line parted well below the pressure needed to have done so normally. And until 1600 I hadn’t had one touch on any legered bait – and although there was ‘action’ around my floating bread baits mainly it was small fish just breaking it up although 2 or 3 takes were from larger carp but missed. 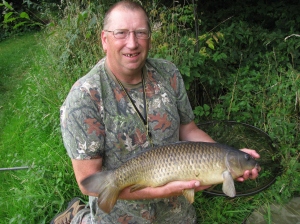 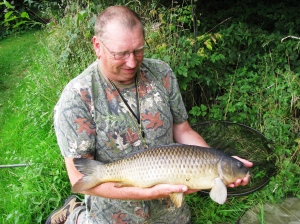 Fishing planned for next week…..
A session on the River Severn, a session on one of my club’s pools and, hopefully, a short midday session with the lures on the canal.

I had a new fishing jacket arrive yesterday. My current Ron Thompson Ontario jacket, after 2 years of valiant service, is finally giving up the ghost. Seams are now giving way faster than I can repair them and on one pocket the material itself has worn through into a hole. I did purchase a Dutch Combat Jacket from eBay originally but unfortunately it got lost in the mail system and as the seller had no replacements of suitable size I’ve been refunded for that. However, on Friday I found a German Flextarn Unlined Parka for sale for £16.50 in the right size – the reviews were good too – so I ordered that using my trial ‘Amazon Prime’ shipping account (next day delivery, £49 per year usually but I took advantage of a free 1 month trial offer). And it arrived yesterday morning…. And I am very pleased with it. Sturdy material, deep pockets (although not as many in total as the RT Ontario which had 17 in all – and nearly all used – but that resolved by my intention to use a multi-pocketed fishing waistcoat underneath) – and it now has had a wash with soap flakes to prepare it for waterproofing, been dried, dunked into a bucket of waterproofer, re-dried and is now ready for use whenever I go out – except for transferring my Ontario’s pocket contents over to it and the waistcoat which I’ll do shortly. 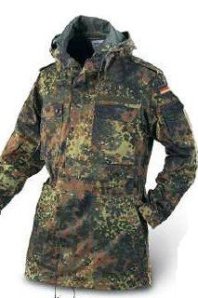