Yep, today is the opening day of the 2013-2014 river coarse fishing season – yet here I am, miles from the river – or any waterway come to that… why??

Well, a couple of factors really.

So my plans for my start of the river season are based around a visit to the Severn on Tuesday 18th. Targets being barbel primarilly with chub as a secondary. Actual location to be visited is still under consideration, but will likely be one of several BAA sections with one of those being a very strong contender at the current time. So tomorrow (Monday 17th) will be spent in prepping my rods, tackle bag and baits. I will be aiming to travel light (well, as light as one can with several 2oz and 3oz leads and possibly a couple of 4oz’s too in the mix). I’ve found an ‘old’ (well, bought a long time ago, used twice actually) leather bag thing that’ll be great for the bigger leads – its actually a bit like a cross between a ‘bum bag/fanny pack’ and a shoulder holster – triangular shaped with several pockets, the top strap fits over the right shoulder and falls diagonally across the back ansd around the front to meet the bottom left corner of the bag at the waist – so its great for spreading the weight across the body. I think I paid about £4.50 for it at the time from Bilston Market.

Will take two rods – my 2lb TC TFG Barbel rod and a lighter backup one – probably one of my old Winfield 1.75lb TC Specialist Angler rods. 10lb or 12lb mainlins will be used, dropping down to 8lb, possibly 6lb for chub.

Baits will consist of meat (various flavours), cheese/paste, pellets and pellet paste, worms, slugs if I can locate some nice black ones, probably take some maggots and corn too. Hemp/wheat/maize for feed purposes.

OK – so that’s the plans – so what’s been happening in the meantime..?

Well, I’ve made a couple of purchases…

Ok, that’s all for this posting…. 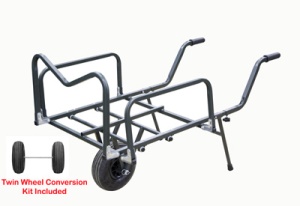