Had a bit of a hard day yesterday with planned household jobs having to make way for unplanned but urgently needed repairs that became apparent when starting the planned  work plus weather forecast for tomorrow is not so good either – so brought forward the plans to fish tomorrow and headed off to the Staffs-Worcs canal at 0430 this morning.

Nice morning to be out – peaceful too at that time 🙂

Made my way to my favoured swim arriving there probably around 0500 – 10 minute drive from home plus 10 minute walk to the swim. Tackled up my Des Taylor Avon System rod using the quiver tip top section with lightest tip installed, 6lb Berkeley Trilene line, 1/8oz leger and a size 16 hook on 6lb hook length attached via link swivel. Fed maggot over to the far bank during the session on a little and often basis, and started with double maggot on the hook.

I had bites straight away from first cast and the third cast produced the first fish of the day – a gudgeon. More gudgeon followed with a small perch too.  I then switched to a size  12 hook with a small prawn as bait which resulted in a few twitches over the course of the next 30 minutes or so but no definite takes – and the same happened when the prawn was replaced by sweetcorn. After that time I switched back to the size 16 hook with single/double maggot baits but started to dip these into Cotswold Bait’s ‘Chopped Worm’ dip/glug… and it may have been coincidence – or maybe not – but I started to catch other species along with gudgeon – and the gudgeon seemed larger too – but nothing was over about 3oz 🙂

Anyway, I fished until 1030 when I called it a day and headed off home…

Catch of the day:

So, I think I may be trying that dip/glug again (and others too). It did, to me, have a noticeable albeit not dramatic effect but I’m not sure if that was real, psychological or coincidental or a mix of all three – but it HAS given me confidence to use them again on other times and at other places too. They will certainly be given an outing on Friday’s planned session 27 visit to the tench pool with Liz.

Pics of the day: 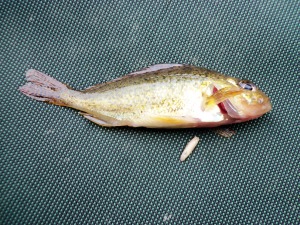