OK… back from Pwllheli now….

Did have a days fishing – but not on the Haven Hafan Y Mor site’s pool as was intended.
Arrived on site on the Monday quite early so we decided to have a walk about and ended up walking around the pool.
Very weedy! Full of elodea (Canadian Pondweed) with the surface of the pool 95% covered by it and small clear holes. Liz saw a good sized (20lb+) carp jump – size verified by another guy walking the pool to whom we chatted. Seems this guy fished the pool last year and managed to land a 27lb’er but he said it was very difficult fishing due to the weed – lost a lot of fish when he was unable to get them back through the weed, even when using ‘dump leads’ (leads that fall off when a fish is being played). Anyway, we decided our strongest tackle would not be up to the job (1.75lb TC rods, 10lb line) on this pool and so we abandoned our plans to fish there.

In the end we decided on the Bron Eifion fishery to fish on Thursday 25th April. We arrived at the fishery just after the 8am opening time and selected 2 swims on the end of the island – Liz fishing directly from the end towards an island and I fishing out to the right hand side into open water. Not the best weather – we arrived in drizzle and mist accompanied by a gusty breeze with intervals of proper showery rain. We fished until around 2:30pm when, having decided we were too wet and cold to continue, and then, as is the usual case, as we were loading the car the rain stopped and others started to arrive at the fishery and to emerge from the wooden lodges around the pool… and an hour later back at the Haven site the sun came out…

We fished 2 rods each – Liz fished spiced meat on one rod and swimfeedered maggot on the other, whilst I fished meat or bread on one rod, and maggot or prawn on the other. Results were fairly equal – all carp, nothing of size, best probably 1.5lb and about 8 fish between us. However, my last fish of the day was a bit of a special – a golden mirror carp of around 1lb. 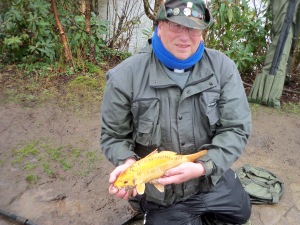 By the way – my clothes are NOT wetlook – just wet! And soaking to the skin!

OK… so session 17 will take place some time next week – not sure when but I want to go to Go Outdoors in Coventry for a couple of screw-in-the-ground brolly poles and also hopefully get to Fosters of Birmingham to get a Korum 3-rod quiver – after which I’ll put my current Korum 2-rod quiver for sale on eBay.

If you’ve not got a quiver then get one! I’ve 2 currently in use – the original Korum 2-rod one  which I use for stalking/roving on rivers and an Trakker NGX Captive 5-rod quiver I use for my more static forms of fishing. And intend changing the 2-rod quiver for the 3-rod version. 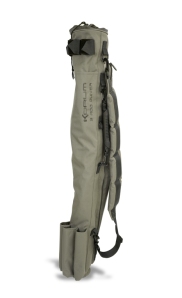 Liz has a similar 5-rod quiver – also a Trakker but not the Captive – the difference being that there are no protective tip covers on hers…. but she has obtained separate ones which she can attach via elastics to make the quiver into an virtual ‘Captive’ (thanks to a thoughtful boyfriend who bought her a sewing machine as a present! 😀

The advantage of a quiver is that the rods can be carried with reels attached and terminal rigs pre-setup before setting off to the waterside. I *HATE* wasting valuable fishing time setting up tackle!! 😀

Also Liz has made about 8 padded reel pouches (from some camo material purchased from Birmingham Flea Market for about £2, some lining material, velcro and soft foam) which allow the reels to sit inside and a flap wraps around the handle and fastens to the front of the pouch – which keeps the bale arm protected from damage and prevents the bale arms and handles tangling and snagging whilst in the car boot, etc.

Also in favour of the quivers is the fact that, although rods can be carried made up, they don’t have to be… if you prefer to carry your reels separate then you can… but you still gain advantage of the ease of access to your rods as provided by a quiver in comparison to the usual need to unzip an entire length of a conventional holdall for that access.

1. My 60″ oval brolly with sidewalls… purchased from Dragon Carp Direct 12 months or so ago for £30… http://www.dragoncarpdirect.com/products/CK-Fusion-60ins-Oval-Brolly-Shelter.html
I must say that I don’t use the groundsheet though – too fiddly and really no loss of benefit by not using in my opinion.
I’ve also added 3 guy ropes from the centre – and purchased some cheap but substantial tent pegs in order to provide stability in high winds. There is no centre ‘brolly’ pole that sticks in to the ground so it is anchored/secured to the ground usually just by tent pegs in the elastics around the parameter of the brolly but in higher winds the guy ropes add extra strength.

2. My rod pod… again from Dragon Carp Direct for £20.
http://www.dragoncarpdirect.com/products/CK-Fusion-2012-Pod.html
Very similar to ones sold elsewhere for very substantially more – or far better quality to similar items sold elsewhere for the same price. Before I (and Liz) had these we’d tried several other items and tripods, all of which suffered from one or more faults/problems in our opinion. But these are the bees knees as far as we are concerned…
The main factor we like in these is the stability – (a) having double vertical bars on to which the cross/buzz bars fit prevents those buzz bars rotating, something that happens regularly with single verticals  regardless of how tight you lock them and (b) they are heavy enough to be stable and not move when one rod is lifted causing the other rod to bounce out of the rests BUT not so heavy as to make transit a burden and (c) each leg is adjustable so that whatever the ground is like the pod can be set up with the rest levels and stable very quickly due to the use of clip type friction locking (open latch – adjust – close latch). These particular pods are not adjustable in length ie the bar that connects front bars to back bars is one-piece – you can get ones that do from other sources/makers using the same hollow ‘delta’ shaped tube (gives light weight to high strength ratio) but these can cost over £100 – and to be honest we’ve used our pods with rods from 9′ to 13′ (but our usual rods-on-the-pods are 11′) without any problems at all. So – cheap, robust, and of optimum mass to remain firm in all situations we’ve used them in over a good 12 months of almost weekly use. Oh, and the price includes a carry bag too! To be honest, its a very tight fitting bag and the seams and zip do tend to be under strain – and recently both our carry bags failed – mine with the zip, Liz’s at a seam… but with Liz’s sewing machine skills she’s created me a new, slightly bigger bag, from the canvas of an old carp bedchair … and is to do the same for herself. However, I say just treat the bag as a ‘freebie’ – at £20 the pod on its own is well worth that!

3. My Korum Mat Bag
http://www.korum.co.uk/19_The%20Mat%20Bag%20Explained_Article and http://www.korum.co.uk/Item_KMLUG-34
At £20 RRP this is a great item! And by shopping around can probably be purchased for less than £18. Basically, it is a bag in which you can transport sundry items of tackle (eg landing net head, collapsible buckets, a keepnet if you use one (I don’t), etc) to the waterside ready for your days fishing… and once there the base of the bag is padded allowing use as a unhooking mat with side walls of 2″-3″ surrounding to prevent the fish from flapping out. Also, if roving, its easy to drop your baits and sundry tackle items inside, zip up and move to the next swim, unzipping and baits and tackle items are at hand with unhooking mat ready. 2 short strap handles and a longer shoulder strap and a light weight make it very easy work to carry with you.

Maybe next time I’ll take you through the contents of my fishing jacket pockets 🙂
Really, with the exception of large items (rods, nets, chairs, baits, etc), I could go fishing for a whole day wearing just my jacket… and that includes several changes of tactics too. 17 pockets – and I think each one has its own contents from hooks, weights, disgorgers, rubber bands, rubber tubing, etc, etc 🙂 But as I say, that’s for another day!

Now… I’ve only to decide when and where I’ll be off to this week! 🙂