…. and I’ve also just edited the last posting to correct a ‘day’ error…. the 15th June having been a MONday rather the THURSday I’d originally written 🙂

Following the more successful last session I decided that on Friday 19th June I’d make a return to the ‘water of bad feeling’ from the outing previous (Session 19 at AA-GH).

The weather here had been pretty wet and windy the previous few days but the forecast for Friday for the day of the outing was improved – and a couple of days before was forecasting it as mainly bright, dry and calm. Well, in the event there were dry and calm spells of varying durations but these were interspersed with everything from overcast to misty rain to downpour…. but the latest forecast available had stated it would like this and being forewarned I was inevitably forearmed too – and the 60″ oval brolly was brought out for a quite-rare-for-this-time-of-year outing as its mainly used in winter time when I pike fish and need to protect myself from the chilling northerlies. Another reason for light summer use is that, like a bivvy, it requires a decent sized area on a flat bank which limits it to a small number of my venues anyway. Anyway, when used it is a godsend – not only encloses my good self in comfort but also my tackle and bait bags and only the rod holdhall/quiver has to suffer the elements… 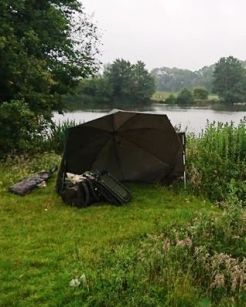 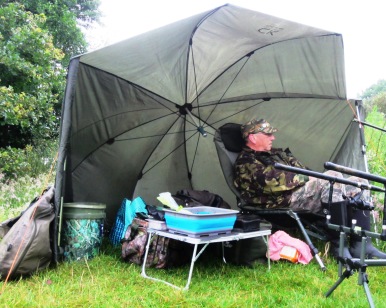 Anyway, as you can see I got the brolly set up firstly before  sorting out the rest of tackle which was then done in the shelter from  the wind and, as it was at the time, a light drizzle.

First casts were made at 0730 in the drizzle with worm and bread as the baits… and by 0805 I’d had bobbin rises on both rods albeit either too quick to strike at or missed on the strike… and by 0815 the rain had abated and the skies brightened… However, as said previously, the weather was like a yoyo… 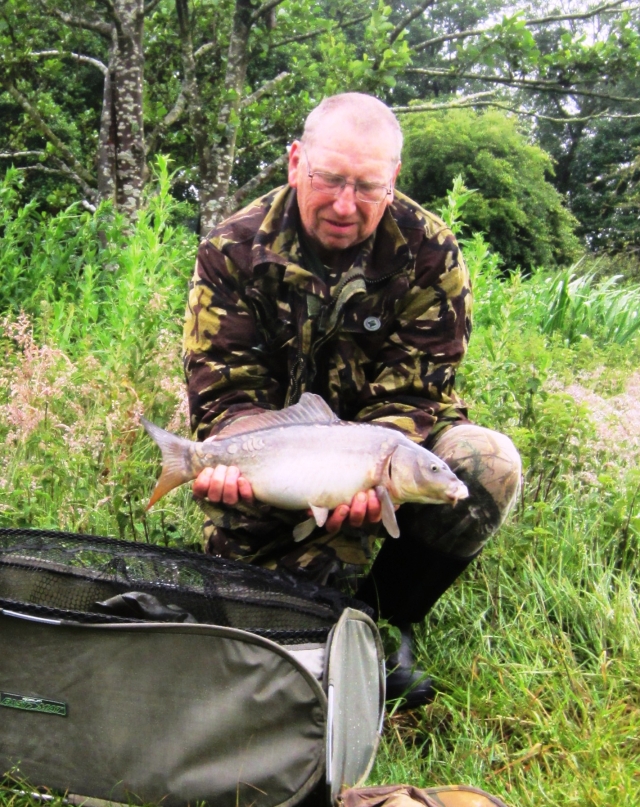 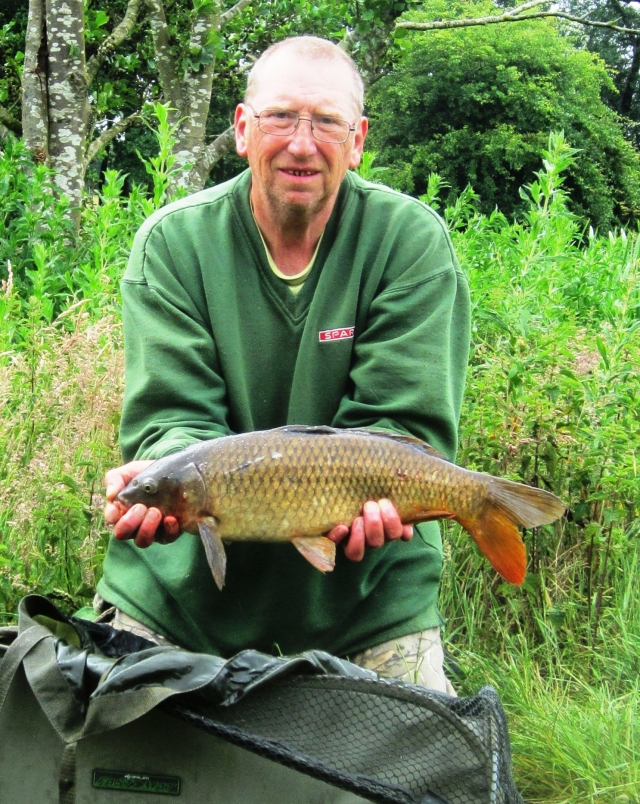 No bream which I had been hoping for though.

I packed up at 1430, a bit earlier than I’d intended, but I’d used up the last of my prepared groundbait for the loading of my frame feeders, it was nice, dry and sunny but with a few darker clouds approaching it seemed a good time to do so, a float I suspect was snagged to the bottom near the far bank and which I’d spotted the week earlier was still there so I thought I might pop round with my ‘general purpose’ rod with a decent weight attached and try to catch around it and release it … the heavy weight I used was a neodymium magnet (high power) that I’d bought some time ago in order to do some ‘magnet fishing’ but never got round to actually doing and so I thought ‘2 birds with one stone’ – try to release float and also cast about and see if I captured any old broken off terminal tackles via their hooks or perhaps some lost lures. As it was both birds were dead in the water – the float lay in such a position that I couldn’t cast into a place whereby I couldn’t get my line loop around the float ie cast outside of the float but then wind back in with the line inside the float’s position from the either of the pegs each side of it due to the position of a trees and bushes and their overhangs over the water – and after a dozen or more casts out along the bank in several places I collected not even a bit of rusty old tin can and the magnet came back as clean as a whistle … perhaps the canal might be better with shopping trolleys or Black Country Whales (from the local dialect – ‘I cort a whale in the cut only the uver day!’, ‘Blimey! wot did yoe do wiv it?’ ‘Ar chucked it straight back in agin, day I?  It day av no spokes!’… LOL) in great abundance it seems!

Off out to another club pool and meeting up with a friend who not only is a member of the club controlling the intended water but is also a fellow member of another club of mine.

One comment on “Session 21 – Got The Feeling Back This Time…”